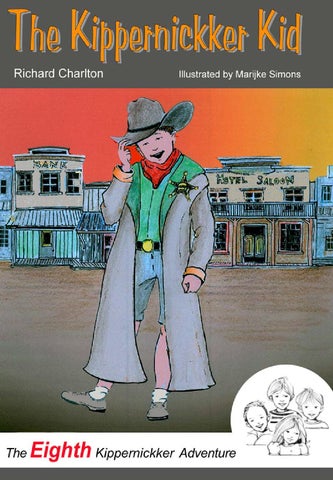 Copyright 2015 ÂŠ Richard Charlton No part of this book may be reproduced, stored in a retrieval system, or transmitted, in any form or by any means, without the prior written permission of the publisher, except by a retriever who may quote brief passages in review. Cover and interior illustrations by Marijke Simons Kippernickker Logo by Audrey Matheson

Donnegan and his Gang

Back to the Mine

Jonathan Kippernickker looked at the watch on his wrist. The watch had been a Christmas present and even though it was now February it still worked. It had two pointers and at that moment they told him it was almost half past two in the afternoon. Jonathanâ&#x20AC;&#x2122;s boring time. And so it was. He sat up in the tree house and thought of nothing much. It was very hot, and the sun was shining through the leaves above, and made dappled patterns on the wooden boards of the tree house.

He was rap, rap, rapping, on the floor with a thin stick which served as a sword, and was thinking of nothing in particular. His face was partly shaded by the rim of an old cowboy hat he had on his head. It was a large cowboy hat and kept the sun off. That afternoon Nicolas Kippernickker was playing in an indoor hockey league, with his roller blade hockey team, as he was good on roller blades. He wouldn’t be back for ages. Matthew Kippernickker was in his room grounded for climbing up the bookcase shelves that morning to see how high he could go. And when he’d reached the ceiling he’d got stuck and the bookcase had fallen over. Not actually right over because Mummy Kippernickker saw what was happening at the last minute and stopped any great injury to Matthew. But he fell on the carpet and most of the books fell on top of him. It had taken all morning to tidy things up again, and he was grounded for the present. Timothy Kippernickker was sitting in the garden on a rug in his playpen,

surrounded by his toys and seemed quite content as usual, but Jonathan didn’t want to play with Timothy inside a playpen. Sarah Kippernickker was out at Rebecca’s house, so Jonathan was on his own, and there was never anything to do on Saturdays, especially at half past two in the afternoon. Just then a car drove up the driveway and Sarah got out. Jonathan heard her say thank you and saw her wave to the driver as the car drove away. From his height in the tree house he saw Sarah come through the side gate and walk into the garden. In her hand she was carrying a small bag. At first he thought it was a bag of marbles. It seemed to be made of thick cloth, and it had a draw-string at the top to close it. He watched Sarah sit down on the patio wall and loosen the draw-string. She then took something out of the bag, put it in her mouth and started chewing. She then pulled the draw strings and closed the bag again. “What have you got, Sarah?” said Jonathan Kippernickker from the sky.

away,” she said, “and Rebecca’s Dad brought them home for her.” Jonathan knew that Rebecca’s father worked for the Air Force and was a doctor with a Search and Rescue Unit and often went to strange places, so he considered this. “It has a longer name than Honk,” said Sarah suddenly. “What?” said Jonathan. “Honk Honk,” said Sarah. “Sarah!” said Jonathan getting up off his knees and leaning over the tree house rail, “there is no such place called Honk Honk, so don’t make things up.” Just then a minivan drove up and Nicolas Kippernickker got out with his great hockey bag. After a few noisy moments of shouting and banging, the van roared off down the drive. Nicolas dumped his bag in the garage, came into the garden and sat on the wall next to Sarah, tired out after his afternoon game. “What’s that, Sarah?” he asked, looking at the bag. “Gold Nuggets,” she said, and opened 11

her mouth, pointing in so Nicolas could inspect what was being chewed. “Nicolas!” said a voice from the tree house, “Sarah’s making up things again.” “No, I am not, Jonathan,” said Sarah firmly. “Well, tell Nicolas where the Gold Nuggets came from,” he said, standing up in the tree house now and looking down at them. “Why should I?” she said. “Where did they come from?” asked Nicolas Kippernickker. “From Honk Honk!” shouted Jonathan from the tree house. “That’s what she said.” “Oh,” said Nicolas. Then he said, “Sarah, it isn’t Honk Honk. I think you mean Hong Kong; that’s a city in another country. Did Rebecca’s Dad bring them?” “Yes,” said Sarah. “He’s just been to Hong Kong, Jonathan,” said Nicolas. Jonathan was silent in the tree house.

“It’s Hong Kong, Sarah,” said Nicolas. “Will you trade for them, Sarah?” asked Jonathan suddenly. “Not until you ’pologize,” said Sarah. There was a pause and Jonathan began tapping with his stick again. “All right,” said an apologetic Jonathan Kippernickker after a few minutes. “Trade for what?” said Sarah. “I’ll trade this sword,” he said. Now of all the Kippernickkers, Sarah was the only one without a sword or a stick, partly because she didn’t like being hit on the knuckles all the time, or having to fall down wounded when playing pirates, and partly because she preferred playing with her dolls. But she had secretly admired Jonathan’s sword, the thin piece of wood wrapped in aluminum foil which he called a rapier, and which he used during the adventure of Prince Rupert’s Birthday. “All right,” she said, tiring of the Gold Nugget in her mouth and having lost interest in the old cloth bag. So the deal was done. Jonathan came 14

down from the tree and handed over the sword and Sarah handed over the bag of Gold Nuggets. It had ‘Gold Nuggets’ written on the cloth and so he sat down and opened the bag. The cloth bag was full of chunky pieces of rock, but it wasn’t rock, it was gold; glittering nuggets of gold. But then it wasn’t really gold either, it was candy made to look like real gold. And the gold nuggets looked very real indeed. In fact, as Sarah Kippernickker demonstrated, the candy was more than just candy, it was actually bubble gum and she blew up a fair sized gold bubble until it burst over her nose with a plop. Jonathan jiggled the gold up and down in the bag, then he put his hand in his back pocket and to their surprise pulled out a large and bright metal key which glinted silver in the afternoon sunshine. “The Adventure Key!” cried Sarah Kippernickker standing up. “Where did you get that from, Jonathan?” “Nicolas gave it to me after we met George the giant. (that was after their adventure The Giant of Grumm). He didn’t 15

want you to know where it was in case you went off on your own again, so I put it in my back pocket, and I tell you what, I’m going to keep it in the Gold Nugget bag for safety, and no one else will think of looking there. So, in goes the Key,” and in it went amongst the golden nuggets inside. He joggled the cloth bag and it make a sound like, ‘check it, check it, check it, check it’. Sarah Kippernickker, whose imagination was more vivid than anyone else’s said at once, “It’s telling us to check it. Listen, Jonathan, it’s saying, check it, check it. So we’d better check the trapdoor in case there’s a key hole and another adventure coming this afternoon. I love adventures. Come on Nicolas, let’s check the trapdoor. I’m sure we’ll find a keyhole!”