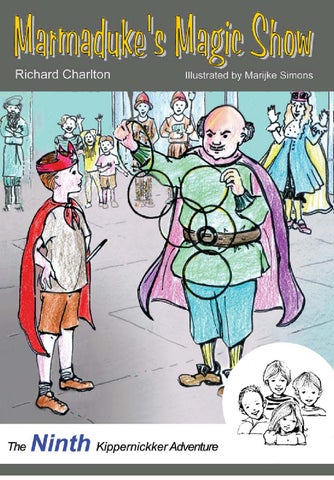 Copyright 2015 © Richard Charlton No part of this book may be reproduced, stored in a retrieval system, or transmitted, in any form or by any means, without the prior written permission of the publisher, except by a retriever who may quote brief passages in review. Cover and interior illustrations by Marijke Simons Kippernickker Logo by Audrey Matheson Printed in 2015 by Halcraft Printers, Halifax, NS

It was the great Marmaduke!

The Picture that Blinked

“Your Majesty,” said Jonathan, “I will now read your mind.”

He had watched Jonathan practicing the tricks ever since Jonathanâ&#x20AC;&#x2122;s birthday, when a large box had arrived, all wrapped in brightly colored paper. It turned out to be a box of magic tricks from one of his uncles. One never knew how Jonathan Kippernickker would feel about any gift, and this was often a worry to his relations, but Jonathan had been very excited about the box of tricks and had been practicing them on everybody ever since. Today he was up in the tree house, wearing an old red sheet like a cloak over his shoulders and a crown made out of thick red card with a star on the front. He had borrowed Sarahâ&#x20AC;&#x2122;s sword which he had previously traded for a bag of Gold Nuggets bubble gum (during their last Adventure, The Kippernickker Kid). He was using this as a magic wand. The sword was a thin stick of wood wrapped with tin foil and looked very magical. He held up the now closed plastic box so everyone could see it clearly and he twisted it round in his hands. Then he tapped it with his wand and opened the 8

box. To everyone’s surprise, it was not empty as they had just seen, for inside was a small yellow ball. Jonathan bowed. “And now,” he said, “I will make the ball disappear,” and he closed the little black box again, twisted it about in his hands, and again held it up. “Watch closely,” he said, and he tapped the box with his wand and then opened the side of the box. The yellow ball had disappeared and the box was empty. Had this been on television there would have been great applause at this point, and indeed, this was what Jonathan was expecting, but his audience was not impressed. “I know how you do it,” said Sarah Kippernickker. “I do too,” said Rebecca, Sarah’s friend. “It’s simple, anyone could do it. My little brother even does it.” “I know too how to do it,” said Matthew, who had no idea how to do it, but didn’t want to be left out. “Do the rings,” said Sarah, who’d seen them under Jonathan’s bed. 9

“I will finish today’s performance. . .with a mystery trick.”

“I can’t,” Jonathan said, “one of the rings is lost.” He suspected Matthew had taken it but it could just as well have been Sarah, or he could have lost himself somewhere. “I will finish today’s performance,” he said, “with a mystery trick. I will read your minds like the great Marmaduke.” “Who’s he?” said Sarah. “He’s the magician in my book,” said Jonathan, “and I shall now read your minds.” “You can’t,” said the girl called Margaret, one of Rebecca’s friends, “Why not?” said the Magician. “It’s against the law,” said Margaret. Jonathan could think of no answer to that. “It’s not when it’s private, in your own garden,” he said finally. “Well, don’t blame me if you go to jail,” she said. “Jonathan’s been to jail before,” said Sarah to her friends. “Mr Bread Bun had him put in jail,” recalling an episode from an earlier adventure which she had promised not to speak about. 11

But nobody was really listening except Nicolas, who said, “Sarah, don’t tell stories.” “Do the rings,” shouted Matthew Kippernickker. “I am going to read your mind,” said Jonathan Kippernickker pointing to one of Rebecca’s girl friends who had said nothing yet. “Could you tell me your name please?” Jonathan asked. “Melissa,” she said. “Melissa,” said Jonathan Kippernickker, “I am going to read your mind. The thoughts you have in your brain I am going to be able to see in my brain. Are you ready.” “Will it hurt?” said Melissa. “No, why should it hurt?” he said. “I don’t want to get a headache,” said Melissa. “Are you going to do the rings?” asked Matthew. “No,” said Jonathan. “It doesn’t hurt,” said Sarah, “he’s been doing it to Nicolas and Mummy and 12

Daddy every day. It doesn’t hurt does it, Nicolas?” she shouted over to him. “I’ve got a headache with watching it,” said Nicolas. “It won’t hurt,” said Jonathan Kippernickker, who felt he was losing his audience, so he said out loud to Melissa, “Melissa, I want you to think of a number between one and sixty. Now think carefully.” Melissa shut her eyes and concentrated. “Have you thought of a number yet?” said Jonathan. “No,” she said. “Well, think of one,” said Jonathan, waiting. “Have you thought of a number yet?” he asked. “No,” said Melissa. “Why not?” said Jonathan Kippernickker. “I can only count up to twenty,” she said. “Do the rings!” shouted one of Matthew’s friends. 13

But just then Daddy Kippernickker came home from work on his bicycle, and shouted over that dinner was ready. So the magic show was brought to an end and the children went their different ways without having seen the amazing rings or witnessed the incredible thought-reading skills of Jonathan Kippernickker.