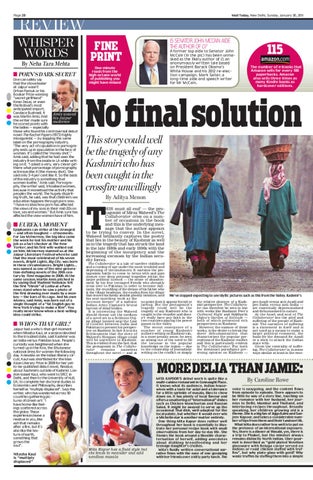 REVIEW WHISPER WORDS By Neha Tara Mehta ■ PORN’S DARK SECRET One can safely say that the showstealer at Jaipur wasn’t Orhan Pamuk or his Booker Prize-winning “secret girlfriend” Kiran Desai, or even the festival’s most anticipated import, Candace Bushnell. It Amis wowed was Martin Amis. And his Jaipur the writer made sure audience he scored points with the ladies — especially those who found his controversial debut novel The Rachel Papers (1973) highly misogynistic — by slapping the same label on the pornography industry. “The very act of copulation in pornography ends up in ejaculation in the face of women. It’s called the ‘money shot’,” Amis said, adding that he had seen the industry from the inside in LA while writing on it. “I asked a very, very clever girl there what percentage of pornography actresses like it [the money shot]. She said only 3-4 per cent like it. So the basis of the industry is something that women loathe,” Amis said. Pornography, the writer said, trivialised women, because it monetised the activity that peoples the world. The hugely dispiriting truth, he said, was that children’s sex education happens through porn now. “I have no idea how porn has affected the views of my sons in their mid-20s on love, sex and women.” But Amis sure has affected the view women have of him.

■ EUREKA MOMENT Epiphanies can strike at the strangest — and often toughest — of moments. For Jay McInerney, the big idea came the week he lost his mother and his job as a fact-checker at The New Yorker, and his first wife walked out on him. McInerney stunned us at the Jaipur Literature Festival when he said that the most celebrated of his seven novels, Bright Lights, Big City, was born in these circumstances. Bright Lights… was named as one of the nine generation-defining novels of the 20th century by Time magazine in 2006. At the same session, Martin Amis pitched in by saying that Vladimir Nabokov felt the first “throb” of Lolita at a Paris news stand when he saw a photo of the first drawing ever made by a monkey — the bars of its cage. And his own Money, said Amis, was born out of a single thought of a “fat English guy in New York trying to make a film”. You really never know when a best-selling idea could strike.

■ WHO’S THAT GIRL? Jaipur had a who’s-that-girl moment when Nitasha Kaul, at a session devoted to the troubled state, said Kashmir was an India-versus-Pakistan issue. People’s curiosity was heightened when she turned up in the Kira, the Bhutanese national dress for women the following day. A newbie on the Indian literary circuit, Kaul was shortlisted for the Man Asian Literary Prize in 2009 for her yetto-be-published debut novel, Residue, about Kashmiris outside of Kashmir. London-based Kaul, who went to SRCC in Delhi, and then to the University of Hull, UK, to complete her doctoral studies in Economics and Philosophy, describes herself as “multiply displaced”. Says the writer, who has wandered across 50 countries gathering pictures of street-art: “I have home-like feelings scattered across the globe. These experiences leave a residue in you, like ash that remains after a fire, but it’s also like the texture of earth, something that grows the soul”. Nitasha Kaul is “multiply displaced”

IS SENATOR JOHN MCCAIN AIDE THE AUTHOR OF O?

A former top aide to Senator John McCain (in the pic) has been unmasked as the likely author of O, an anonymously written tale based on President Barack Obama’s White House and his 2012 re-election campaign. Mark Salter, a long-time aide and speech writer for Mr McCain.

115 The number of e-books that Amazon sells for every 100 paperbacks. Amazon also sells three times as many Kindle books as hardcover editions.

HIS must all end’ — the protagonist of Mirza Waheed’s The Collaborator cries on a number of occasions in the book and this is the underlying message that the author appears to be trying to convey. In the novel, Waheed brilliantly captures the poetry that lies in the beauty of Kashmir as well as in the tragedy that has struck the land in the late 1980s and early 1990s with the beginning of the insurgency and the increasing excesses by the Indian security forces. The Collaborator is a tale of carefree childhood and a coming of age under the most troubled and depressing of circumstances. It narrates the protagonists battle to come to terms with and gain closure over deep personal tragedies within the larger political turmoil — the sense of abandonment by his four teenaged friends who abruptly cross over to Pakistan in order to become militants, the crumbling of the dream of his father who is the village headman, the exodus from his village that leaves his family amidst ghostly isolation, and We’ve stopped expecting to see idyllic pictures such as this from the Valley. Kashmir’s his soul-numbing work as the the relative absence of a Kashpro-Azadi versus anti-Azadi and ‘account keeper’ of a sadistic no point does it appear forced or miri perspective. The Collaborapro-India versus anti-India — Indian Army Captain’s brutal jarring. For, the protagonist’s tragedy could well be the tor can therefore be seen in line are essentially depersonalised harvest of dead bodies. with works like Basharat Peer’s and dehumanised in nature. It is interesting the Waheed tragedy of any Kashmiri who is Curfewed Night and Siddharth At the heart and soul of The should choose use the medium caught in the crossfire and doesGigoo’s Garden of Solitude — Collaborator lies the grief and of a novel set in a fictitious Guj- n’t really have any faith in the both of which presented rich suffering of the people of Kashjar village located near the Line two countries playing the power perspectives on Kashmir. mir. The narrative of suffering of Control between India and games in the valley. The recent emergence of a However, the essence of these is a statement in itself and is Pakistan to present his perspecworks, is the desire to break the not used as a means to make a tive on Kashmir. In fact it is in its number of young Kashmiri sheer dehumanisation that larger political comment, the fictitiousness that the story of authors writing on Kashmir can, characterises the popular perbasis for the demand for Azadi Waheed’s Nowgam village could in a more prosaic sense, be seen ceptions of the Kashmir conflict or a stick to attack the Indian well be anywhere in Kashmir. as arising out of the need to fill and this is particularly evident state with. This is evident from the fact that the lacunae in the popular in The Collaborator. For, both the protagonist in The Collabo- knowledge on the region — due Given the centrality of sufferto the censorship of journalistic the dominant paradigms govrator remains nameless ing, The Collaborator is, in some writing on the conflict or simply erning opinion on Kashmir — throughout the novel — and at ways similar at least in the emo-

MITA KAPOOR’S debut work is quite like a multi-cuisine restaurant in Connaught Place. It knows what its audience, Indian housewives with a taste for subzi and a tolerance for a little sprinkle of masala, likes to chow down on. It has plenty of local flavour and offers a smattering of “international” dishes such as Chicken Manchurian and Russian Salad. It might be swayed to serve up the occasional Thai dish, well-adapted for the local palate, but whether it would ever win a Michelin star is another matter entirely. One thing Mita Kapur does rather well throughout her book is essentially to illustrate her personal recipe book with small observations from her day-to-day life. She frames the book around a likeable characterisation of herself, adding anecdotes about disliking breastfeeding and her teenage daughter’s crushes. Mita’s fluidly written conversational narrative flows with the ease of one gossiping with her friends over a kitty party lunch. The

By Caroline Rowe voice is easygoing, and the content flows from episode to episode. There appears to be little by way of a story line, touching on her romance with her husband, her journeys to Delhi, Mumbai and Thailand, and interlacing recipes throughout. Broadly speaking, her children growing old is a theme. She is a big fan of Jiggs Kalra and Sanjeev Kapoor, and takes a considerable number of tips from them and their tandoori ilk. What Mita does rather less well is to put on the pretence of an international exposure. Yes, there is a dinner at Wasabi, yes, there is a trip to Phuket, but the mindset always remains distinctly North Indian. Uber gourmet is described as “gold-plated Venetian glassware with Beluga caviar served on melons or roast chicken stuffed with truffles”, but why plate glass with gold? Why waste truffles by stuffing them into a simple Profile of Nitasha Kaul, author of 'Residue', in the newspaper 'Mail Today', 30 January 2011

Profile of Nitasha Kaul, author of 'Residue', in the newspaper 'Mail Today', 30 January 2011