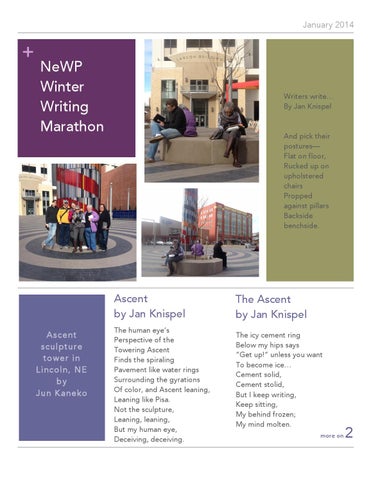 And pick their postures— Flat on floor, Rucked up on upholstered chairs Propped against pillars Backside benchside.

The human eye’s Perspective of the Towering Ascent Finds the spiraling Pavement like water rings Surrounding the gyrations Of color, and Ascent leaning, Leaning like Pisa. Not the sculpture, Leaning, leaning, But my human eye, Deceiving, deceiving.

The Ascent by Jan Knispel The icy cement ring Below my hips says “Get up!” unless you want To become ice… Cement solid, Cement stolid, But I keep writing, Keep sitting, My behind frozen; My mind molten. more on

Issue | Date Last night the moon rolled over so its belly was exposed, like a silver sliver about to shimmy the way Robert’s nickels wind down when he spins them on a restaurant table. By Kate Brooke

Salivation? Really? By Brenda Larabee It was the summer of 1983 and I was a naive country girl transplanted for two months into small-town (80,000 small-town) Holland. I still remember as if it was yesterday the astonishing things I encountered. Many of which fuel my current cravings. I crave - not every day, but once a year mineral water ~ I'm not sure it's the mineral water I'm craving as much as it is Circling Ascent by Jan Knispel

the stories dredged up because of it - the memories. The salty black licorice for the girl who liked black licorice and wound up having the shock of her life when it was SALTY and then finding I couldn't get enough of it. Today - some 30 years later, inside Licorice International, I have the opportunity to purchase some saliva inducing Zout and satisfy that craving.

Evidently, this guy on the phone …”Does he have kids?” Has nowhere to go, but Ring around a tower. Imitating the rings of brick, White and grey. Holding to his bicycle Like Dorothy on the Yellow Brick Road

Or Miss Gulch kidnapping a little dog. Moving, moving, a circular path With no beginning, no ending of Movement or conversation. Just motion and talk and … “All right, bye.” Straight to the crosswalk Disappearing as if sucked up By a twister. 2

The homeless lay next To her steel walker while the Big Red Recruits pass.

Inspired by early photographs of Crow Indians in the Great Plains Museum.

“I lea rned…” By Jan Knispel

When I quit teaching in 1980 worn senseless from the job’s demands, I found what I thought was a 9 to 5 job on the Pine Ridge Indian Reservation. I learned …the Lakota ways and names …that a man the “spit and image” of my grandfather had 11 children, 56 grandchildren And 16 great-grandchildren. … I was an “auntie” to some and a grandmother to others and a Tyrant to the three wasting their money on pot, worrying their grandmother Grace. I learned …to drive with my windows up and never let Dolor Sit Amet

anyone approach The state car when on home visits— Gene got a broken nose from a punch in the face At the Wounded Knee turn off— New blood on an old massacre ground. ….to stand with my back to the wall, not to the door. I learned that, for some, lease money was more potent than protection of their children. I learned I would rather be a teacher. Another L esson By Jan Knispel My friend Ed is the great grandchild Of Chief Hollow Horn Bear Of the Sicangu Lakota of Rosebud Ed came late to his history— His mother mute about her Sioux Heritage. Now he paints Chief Hollow Horn Bear Native women, hoop dancer, and

Lorem Ipsum Cousins, aunts, uncles Against ghost-like backgrounds To capture the Moon of Popping Trees And the strength of his people. “Heritage” By Jan Knispel I have Lakota Blood, probably Yankton. My grandfather adopted from an orphanage In Sioux Falls, some doubt as to whether his sister Was by paper or blood. Records were burned by his Last wife, not my grandmother who divorced him years before. We have no heritage. No known history. Except my folded eyes, broad nose and high cheekbones. Those tell my history. I wish I had my grandfather’s.

Issue | Date The Stage I S closed. But there’s that Funky Blue Grass over The barista’s shoulder blaring out A Tennessee Twang. The S T A G E is closed! “Mama don’t want no guitar playin’ ‘round here.” But the expresso machine churns out A steamy plunk and gristly grind In accompaniment. T H E Stage is closed. Buns sit lonely in their paper mufflers, Cookies caught in pale cellophane. “I don’t want no gal…” AND NO PERFORMANCES Because This Stage is closed!

Two poems from the Crescent Moon Coffee Shop The Stage… By Jan Knispel The Stage is C L O S E D! No walking, no running, No mic’ing, no moaning Like Hamlet’s Father’s Ghost. No poems, sad or blue, funny or new.

Observations on a Lone Barista By Jan Knispel I’ll bet that this young, dark haired man Behind the counter wishes that Robert

Was NOT Crescent Moon literate and he Could have just stood Bland and blank behind the black Counter, looking like yesterday’s day-old Cookies in cellophane. But we five writers clamored in, invaded the Premises from above ground, Down cement steps through Brick built hallway, into the abandoned bistro And claimed writing spaces, after, Of course, ordering the obligatory brew to imbibe. While - sodales. warming those backsides that suffered From the Ascent’s surrounding cement boundaries, We scribble thoughts on various papers. Books are stashed higgledypiggledy on shelves. If I borrowed one, what would I do to return it from The Hinterlands? I could just steal it, and keep marching To the fiddled old Union marching song in the background. Marching to the oblivion with the book in one hand and red chocolate cup in the other.

Visiting the lower level of The Great Plains Museum By Jackie Byers on a sign: "Fred E. Miller: Photographs of Crows" my bird brain expected illustration for Poe's familiar piece. a pbs show on intelligence in crows surged from a memory crevice. these birds would remember posing for Miller if I could question them. of course crow speak a different language. moving into the museum's display room I was surprised to see pictures of people. these were the un-winged human Crow native of these plains preserved in black and white ironic when considered in terms of the racial epithet so often applied to natives. photos also speak a different language. Sontag's essay on photography notes that photos tell lies one split second of a situation truth sliced from reality bleeding truth from time before and after the faces in the pictures are emotionless. is that how natives learned to live with interlopers?

Word Trance By Diana Weis Sitting in Novel Idea, I can only listen to the small creeks in the floor and occasional thumps and thuds of books interrupting the pureness and crispness of wrapped silence. Perhaps for the first time, recognizing that words have their own silence. For all they are spoken and pounded out, written words carry a buffer of unspoken sounds inviting meaning, recognition, understanding, silent acknowledgment lettered out a bound buffer between nothing and everything. A treasure of self calling to the writers and readers here looking to be filled.

January 2015 Bricked Inside the By Diana Weis Bricked in, Bathed in sunlight. The marqueeâ&#x20AC;&#x2122;s sign announcing this weekendâ&#x20AC;&#x2122;s line up outside. The busy list of obligations January has shuffled out for me are carried away by passing street sounds. The roof top view blocking me from following them. Allowing me to rest in the warmth here Sheltered, and only able to gaze, from my pen to page or Brick to sky.

Join NeWP on our next writing marathon. Writers are invited to walk or bike historic Benson in Omaha, NE. Saturday, April 4th Gather and socialize at the Omaha Bicycle Company 11:00 Marathon Launch 2:50 read around at the Pizza Shoppe Collective For more information go to http://www.unl.edu/newp/