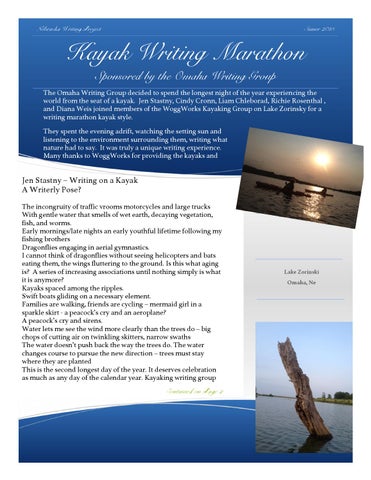 Kayak Writing Marathon Sponsored by the Omaha Writing Group The Omaha Writing Group decided to spend the longest night of the year experiencing the world from the seat of a kayak. Jen Stastny, Cindy Cronn, Liam Chleborad, Richie Rosenthal , and Diana Weis joined members of the WoggWorks Kayaking Group on Lake Zorinsky for a writing marathon kayak style. They spent the evening adrift, watching the setting sun and listening to the environment surrounding them, writing what nature had to say. It was truly a unique writing experience. Many thanks to WoggWorks for providing the kayaks and

Jen Stastny – Writing on a Kayak A Writerly Pose? The incongruity of traffic vrooms motorcycles and large trucks With gentle water that smells of wet earth, decaying vegetation, fish, and worms. Early mornings/late nights an early youthful lifetime following my fishing brothers Dragonflies engaging in aerial gymnastics. I cannot think of dragonflies without seeing helicopters and bats eating them, the wings fluttering to the ground. Is this what aging is? A series of increasing associations until nothing simply is what it is anymore? Kayaks spaced among the ripples. Swift boats gliding on a necessary element. Families are walking, friends are cycling – mermaid girl in a sparkle skirt - a peacock’s cry and an aeroplane? A peacock’s cry and sirens. Water lets me see the wind more clearly than the trees do – big chops of cutting air on twinkling skitters, narrow swaths The water doesn’t push back the way the trees do. The water changes course to pursue the new direction – trees must stay where they are planted This is the second longest day of the year. It deserves celebration as much as any day of the calendar year. Kayaking writing group Continued on Page 2

may have been the best idea ever. I’m so glad Diana was thusly inspired. It’s important to venture outside of the usual. It’s good to try to do what people say we cannot do. I like the idea of writing at our group meetings to help inspire each other or to jump-start ourselves on writing paths. Breeze swooshing branches Ballerina pirouettes Arcing back to first I find myself hungry. That’s a good thing. It ind – Logs and frogs and hammering Trirlrlrlrlrlrlrlrlrlrlrcheeeee of a calling bird Cyclists sharing a drink and a rest And the wind is taking me Stranded on a tree stump – it has captured me.

“I’d rather write on a desk or a mountain top,” Tom shared, and perhaps those spots would be more logical than this yellow kayak I have set myself adrift in. How curious we must look having paddled ourselves against the breaking wind to find the one calm spot on this lake. But, as a goose’s flight sweeps just a foot above the water, rising as it calls to its companions, I note that the click of its wing can only be heard from this spot and captured in this moment by this pen. Writing in a kayak, not sure how to balance. I feel like a flat bottomed-duck submerged in the water for the first time, moving gently with the translation of wind to wave. While fragments of the setting sun scroll across the ripples as nature’s silence wraps thought around my pen.

By Liam Chleborad He was teaching his brother to fish. Reel, rod, tackle, line, casting, etc. Daniel was three years young and lacked the experience of his veteran twelve-year-old brother. The water was placid, not like glass, but calm nonetheless. The lack of any waves or wake made the story even harder to believe. Danny had just thrown his first decent cast of the day and turned to his brother for approval. He was futzing with a snag and didn’t look up to see Daniel’s wave or ear-to-ear grin. Then Danny was gone. He heard a glug of water and looked up. A couple of bubbles on the serene lake surface, but nothing else. He ran to the bank searching the length of the lake with a long gaze. Less than a minute later and a white bobber popped out of the depths. No one believed him. What was there to believe? 2

He didn’t have an explanation.

It went on for 3 more days before the city council admitted it wasn’t part of the shtick. People cleared out days prior to the announcement. By the time anything was official, the town resembled an actual ghost town...

That’s not when it started, of course. True, it is when the story began for Michael, but people had been going missing from Lake Zorinsky for decades. Stories like this have to take place over a long span of time. There’d be no other way a creature could grow to the size, to which it was rumored. Dogs, kids, joggers, fishermen… families. All sorts had disappeared over the years. “Swimmers Beware” and “Swim at your own risk” signs were brought up at the city council meetings, but the board wanted to avoid “hysteria.” Tourist dollars, that’s what was really at stake. Money made decisions in the town. It was more than a little disgusting, the way the disappearances were eventually turned into a tourist trap. Spooky hotels, monster tours, grainy pictures of ghosts in the forest or man-eating fish. You could even buy “I survived Lake Zorinsky” shirts, before they finally drained the lake. Every summer families and Asian tour groups flocked with the hope of catching a glimpse of the unknown. As will happen when you try and turn mystery into campy for the turning of profit, the magic, horror, whatever it was ceased to exist. Still, everyone looked forward to the terror.

Adrift by Diana Weis The light has traveled so far to kiss this water and dance its way to the fine point of diamonds trailing in front of me, and I am left to wonder what makes it stop its journey just short of my craft. Sponsored by the Omaha Writing Group and WoggWorks

Sponsored by the Omaha Writing Group and WoggWorks