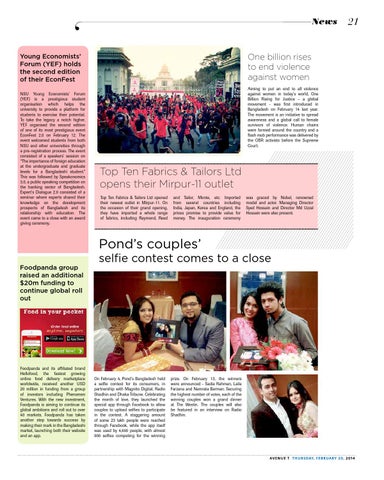 One billion rises to end violence against women

Young Economists’ Forum (YEF) holds the second edition of their EconFest NSU Young Economists’ Forum (YEF) is a prestigious student organisation which helps the university to provide a platform for students to exercise their potential. To take the legacy a notch higher, YEF organised the second edition of one of its most prestigious event EconFest 2.0 on February 12. The event welcomed students from both NSU and other universities through a pre-registration process. The event consisted of a speakers’ session on “The importance of foreign education at the undergraduate and graduate levels for a Bangladeshi student.” This was followed by Speakonomics 3.0, a public speaking competition on the banking sector of Bangladesh. Expert’s Dialogue 2.0 consisted of a seminar where experts shared their knowledge on the development prospects of Bangladesh and its relationship with education. The event came to a close with an award giving ceremony.

Aiming to put an end to all violence against women in today’s world, One Billion Rising for Justice – a global movement - was first introduced in Bangladesh on February 14 last year. The movement is an initiative to spread awareness and a global call to female survivors of violence. Human chains were formed around the country and a flash mob performance was delivered by the OBR activists before the Supreme Court.

and Tailor, Monte, etc. Imported from several countries including India, Japan, Korea and England, the prices promise to provide value for money. The inauguration ceremony

Foodpanda and its affiliated brand Hellofood, the fastest growing online food delivery marketplace worldwide, received another USD 20 million in funding from a group of investors including Phenomen Ventures. With the new investment, Foodpanda is aiming to continue its global ambitions and roll out to over 40 markets. Foodpanda has taken another step towards success by making their mark in the Bangladeshi market, launching both their website and an app.

On February 4, Pond’s Bangladesh held a selfie contest for its consumers, in partnership with Magnito Digital, Radio Shadhin and Dhaka Tribune. Celebrating the month of love, they launched the special app through Facebook to allow couples to upload selfies to participate in the contest. A staggering amount of some 23 lakh people were reached through Facebook, while the app itself was used by 4,600 people, with almost 900 selfies competing for the winning

prize. On February 13, the winners were announced - Sadia Rahman, Laila Farzana and Namrata Barman. Securing the highest number of votes, each of the winning couples won a grand dinner at The Westin. The couples will also be featured in an interview on Radio Shadhin. 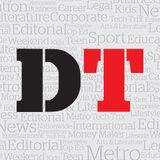