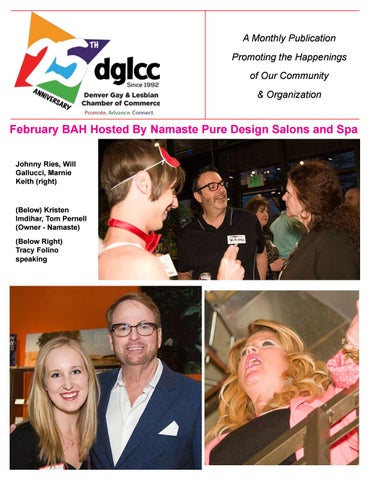 A Monthly Publication Promoting the Happenings of Our Community & Organization

Letter From The Chair Hello DGLCC,

Welcome Spring, wow it is almost here! I don’t know about you but this year is flying by and that means we can’t waste a single day. Get involved, promote your business and move forward! As we move into the 25th year of the Denver Gay and Lesbian Chamber of Commerce, we are ready to help Networking every Tuesday morning, educational breakfast the first Thursday of the month and always the fun and important Business After Hours events on the last Thursday of the month. And a great opportunity you have right now is hosting one of our great Business After Hours. We have 50 to 75 people attend every month. You can host or cohost and split costs. It is a great way to have a captive audience to share your company’s story and/or products. Let me know if you would like to host and I will help make it happen. Have a great month and thank you for being a part of the DGLCC

WHAT’S HAPPENING Sponsored by DoubleTree Hotel This section features non-profit information. It contains the details on non-profits’ accomplishments, upcoming events and what their organizations are doing.

Harmony, a Colorado Chorale, the Denver region’s all-inclusive LGBTQA chorus, has been active for 26 years, and committed to embracing and inspiring an inclusive community through song.

Their spring concert - Tyler’s Suite - pays tribute to Tyler Clementi, the young man who died by suicide in 2010 after being bullied by his roommate during his first weeks of college. Created under the leadership of multiTony® award-winning Composer Stephen Schwartz (Wicked, Pippin) and Dr. Timothy Seelig (Artistic Director of San Francisco Gay Men’s Chorus), Tyler’s Suite explores the voices and experiences of Tyler and his family through music of nine of today’s top composers. The concert performance marks the Rocky Mountain premiere following its tour of major cities including Los Angeles, Chicago and Dallas. Jane Clementi,The suite will be performed May 5 at the Broomfield Auditorium and May 6 at the Denver Central Presbyterian Church.

Be Alert! Some Tips for Safety Awareness From The Center We at The Center have received reports of harassment of LGBT people in the Capitol Hill area. We urge everyone in our community to be extra vigilant. If you have experienced harassment or violence, we urge you to report the incident to law enforcement. If you are uncomfortable contacting police on your own, you are always welcome at The Center; our staff can sit with you and help you make the call. We also suggest you consider the following safety tips:

Be aware of your surroundings. This is your first and best component of self-defense. Don’t let someone take you by surprise. And mind your intuition. If your “sixth sense” is telling you an area or activity is not safe, it’s a good idea to listen.

When possible, travel in a group. Remember there is strength in numbers. Carry a whistle. A whistle is an easy, inexpensive way to get attention quickly and scare off potential harm. Do not engage--It’s okay to walk away. You always have the option to step away from a potential conflict before it escalates. If confronted on the street, you have the option to step into a store or another populated, well-lit area and ask for help. You have a right to fight back if you have to. If help is not available, you have the right to defend yourself. Many women worry that they will anger If you are experiencing non-violent harassment, reach out to The Center’s Legal Program for advice and referrals. Out And Equal Rocky Mountain will host Building Bridges

professionals, customer service representatives and the general employee population. The course is designed to help employers get the most from all employees. This training fosters increased awareness to develop a healthier and safer workplace where all employees are engaged in the mission of the organization, increasing the level of comfort for all and improving communication between LGBT and straight employees and the customers they serve. The high level goals of this class are: Create understanding about LGBT community and cultural competency in the workplace Acquiring terminology and concepts when discussing birth/assigned sex, gender identity, sexual orientation ender expression and how they impact each of us Breaking down myths and stereotypes of the LGBT community Discussing the best practices for company policies/benefits and global policies for LGBT employees Evaluating your company on LGBT workplace equality initiatives Building an Ally Continuum of moving from awareness to ally to advocate Practicing ally skills in common workplace scenarios Discuss research, case studies and next steps for your workplace

ecently, the State, Veterans, and Military Affairs Committee of the Colorado House of Representatives voted 6-3 to defeat House Bill 1013, a broad religious exemption proposal that would have allowed individuals and businesses to claim their religion gives them permission to ignore laws they don’t want to follow — including domestic violence, public safety, and non-discrimination laws.

One Colorado, the state’s leading

During the committee hearing on this legislation, opponents of the bill testified to how religious freedom is already protected by the First Amendment of the Constitution, highlighted the negative effects that similar bills have had in Indiana and North Carolina, and explained that passing House Bill 1013 would send a message that Colorado isn’t open for business to everyone. Before the hearing, a coalition of Colorado business owners, faith leaders, elected officials, members of Colorado’s LGBT caucus, and community groups held a press conference opposing the bill at the

Photo by Austin Montoya, One Colorado*

SHOW THE WORLD HOW YOU #OUTFRONTCO

committee in the Colorado Legislature passed a bill that would protect LGBTQ young people from socalled “conversion therapy” — a dangerous and discredited practice that falsely claims to change their sexual orientation or gender identity. The bill will be up for a full vote in the House soon and we

need your help to make sure it passes.

All the nation’s leading medical and mental health organizations have come out against these practices — which include the use of shame, verbal abuse, and even aversion techniques like electric shocks. These practices pose serious health risks, including

depression, guilt, helplessness, hopelessness, social withdrawal, and even suicide. You can help end these practices in our state by telling your lawmaker that you want them to protect young LGBTQ people by supporting this bill. We know Vice President Pence supports funding

groups that practice conversion therapy. It’s time for Colorado to send a message that we support LGBTQ young people and don’t want this happening in our state. We can’t turn our backs on young people and allow one more young person to be targeted and hurt by these dangerous and discredited practices.

tickets (includes concert T-shirt, drink coupon for the Beach Boys Bahama Mama and own private bar in the Ellie lobby + seats in the first three rows of Orchestra). Go to rmarts.org to purchase tickets. Or contact Rocky Mountain Arts Association at 303-325-3959 for further information.

Matthew Shepard Foundation Presents Elton John in Casper, WY We have some big news. Sir Elton John is coming to Casper, WY and he has been gracious enough to gift us with some tickets to auction off to our supporters! Are you free the night of March 15? Don’t go breaking our hearts … and come with us to the show! You can purchase floor tickets for $100 each here. There are a small number of tickets (20) in the ‘compact seating area’, section R, of the Casper Events Center, and they are being sold for $75 each. Just note, that these seats aren’t for plus-size seating. Make sure to indicate which priced ticket you are buying. All funds from this event go directly to the Matthew Shepard Foundation. We will be using them to rev up our hate crimes program so we can truly make sure that those who need protection and information get it. You may agree that this kind of program can certainly be used right now.

The concert takes place on Wednesday, March 15, 2017 at 8 p.m. as part of an 11-city concert tour that will feature iconic hits and classic album tracks from throughout his incredible five-decade career, as well as selected tracks from his latest release, Wonderful Crazy Night. “The simple truth is I want to spend more time with my family and less time touring,” said Elton. “I am all too aware of how precious the time ahead is. My sons are growing up so quickly. Their early years are just flying by and I want to be there with them”. Elton John’s band features Nigel Olsson (part of Elton’s original three-piece band) on drums, Davey Johnstone (who first recorded with Elton in 1971 and joined the band

a year later) on guitar, John Mahon on percussion, Kim Bullard on keyboards and Matt Bissonette on bass. One of the most successful artists on the road today, Elton and his band perform a concert you will never forget: the entire audience singing along to much-loved classic songs such as “Your Song”, “Rocket Man”, “Bennie and the Jets”, “Philadelphia Freedom”, “Crocodile Rock”, “Don’t Let the Sun Go Down on Me”, and many more. We are extremely honored to welcome Sir Elton John back to Casper Events Center for yet another incredible performance,” said Brad Murphy, General Manager at the Casper Events Center. “The Casper community still raves about his performance in 2007 and we look forward to another ‘Wonderful, Crazy Night’ this March.” Casper Events Center, 1 Events Dr Casper, WY 82601

Debra Johnson getting an Ayurvedic reading from Heidi Nordlund (Namaste)

Door prize winners getting their prizes

Proud Sponsors of the 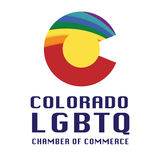