Paolo Veneziano's Coronation of the Virgin 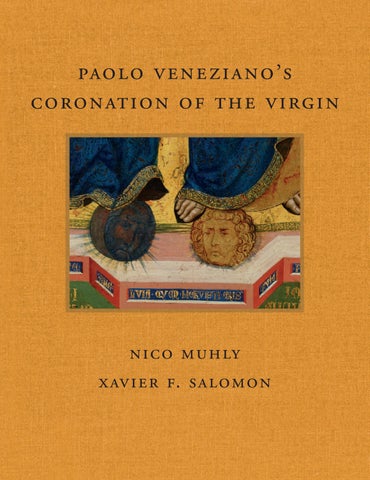 The Frick Collection in association with D Giles Limited

A MULTITUDE OF THE HEAVENLY HOST Nico Muhly

Paolo Veneziano’s Coronation of the Virgin is a panel of pure theater and music. As a tableau, there is an obvious formality to it, but much of the space is taken up with noise-making. The instrumentalists and vocalists are all playing the instruments of the fourteenth century, which is, of course, thrilling to the modern musician: it implies that the artist had seen these instruments played up-close and heard them either individually or in consort. As a composer, I am fascinated with what it must sound like in an artist’s head to paint an instrument. When I write words, it is a relatively simple endeavor to hear them in my head or, indeed, speak them aloud while writing. Writing music, on the other hand, is more complicated, even though it’s my job. Sometimes it’s an act of transcription: I have a conception of what it’s going to sound like “in reality,” more or less, and then the act of notation is more like pausing a video and writing down what’s happening frame by frame. The more instruments there are, the more complicated it gets; you have to keep track of the vertical aggregation of sound at the same time as all of the individual details of each instrument, which requires looking at a single moment from a satellite and then under a microscope nearly simultaneously. Paolo has a practical musical fluency, encoded and elaborated in the preexisting imagery of the Coronation of the Virgin. He’s painted many of the traditional elements of depictions of the Coronation: Mary, linked with the moon, and Jesus, linked with the sun, personified versions of which are under their feet. We see Mary’s crown and halo, with its elaborate diapering and elegant position almost in the middle of the architectural elements behind her, as opposed to Jesus’s, which is less formally and more realistically obscuring 11

Paolo, who surely knew the work of the Master of the Washington Coronation, painted the Coronation of the Virgin a number of times before his final representation of the subject in the Frick painting. His first known painting of this subject is the central compartment of the Santa Chiara Polyptych (fig. 15), in the mid-1330s. The composition is similar to the one in the Washington painting but with additional details: the sun and the moon (which the Master of the Washington Coronation had not included), the two side angels with portable organs, and nineteen music-making and singing angels behind the throne. Paolo seems to be the first to include a musical component in the iconography of the Coronation, adding both a visual element, with the extraordinary depiction of draperies and textiles, and an auditory one, by providing imagined celestial music as a soundtrack to the painting. The Frick’s Coronation represents the ultimate development of the Santa Chiara formal composition—its figures more elongated and elegant, the throne more architecturally grand, and the angels assembling above the scene in a denser composition. In the more than twenty years between the two works, Paolo and his workshop produced a number of works with this iconography. A fragment of a panel, showing ten music-making angels, surmounted by the inscription .regina. celi. letare. alelvia. (Queen of Heaven, rejoice, hallelujah) (fig. 16), is, most likely, a fragment of another Coronation of the Virgin by Paolo’s workshop from the 1340s.62

from a number of others by the workshop of Paolo, as well as other Venetian Trecento painters (such as Lorenzo Veneziano), is that the format of these altarpieces varied greatly. The most recent reconstruction of the polyptych, by John Witty, differs from Kiel’s in a number of ways, most noticeably by the replacement of the shell-like structure above the Coronation with an acute arch, above which are three equally sized panels that would have formed the cimasa (fig. 33). The reconstruction is in great part inspired by the St. Lucy Polyptych in Krk, an altarpiece variously attributed to Paolo and his workshop.114 It seems more likely, however, that the shell motif would have been retained by the carpenters responsible for Paolo’s polyptych across the entire work. Moreover, no surviving work by Paolo presents an arch that is as acute as the one in the central panel of Witty’s reconstruction. While the Frick panel has been cut at the top, it seems unlikely that anything would have been painted

Paolo Veneziano's Coronation of the Virgin