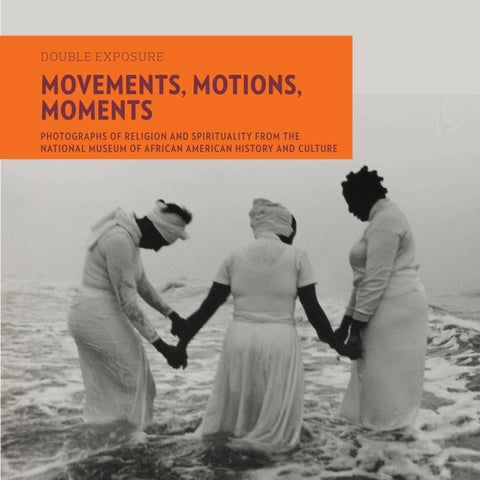 MOVEMENTS, MOTIONS, MOMENTS PHOTOGRAPHS OF RELIGION AND SPIRITUALITY FROM THE NATIONAL MUSEUM OF AFRICAN AMERICAN HISTORY AND CULTURE

MOVEMENTS, MOTIONS, MOMENTS Photographs of Religion and Spirituality from the National Museum of African American History and Culture

connect with the holy, mythic, or spiritual realm. It elevates the body as an instrument in service of the gods and the holy, and defers to the ancestors that light the path forward. Moments captures the cycles, seasons, and celebrations within Black religious communities that are marked by ritual acts and viewed by the adherents of these traditions as sacred or other than ordinary. These moments are often perceived as being invested with sacred power or theological possibility, or as possessing special religious meaning. The sacredness or momentous nature of these occasions comes into full view during the rites of baptism, weddings, births, naming ceremonies, confirmations, burials, bar and bat mitzvahs, altar calls, and other holy days and moments of ritualistic significance. These holy days include Advent, the Feast of Yemanja, the Day of the Dead, Yom Kippur, Kwanzaa, Watch Night, Ramadan, and the New World Passover. Despite the variations of these practices, what is significant is that these are all defining moments in the life of an individual and community, bearing on their identity, hopes, and realities. These moments stand in contradistinction to or apart from other moments, giving shape to some essential quality of life. Such holy moments captured by photographs leave markers in time for the

adherents, a way of being remembered. At the same time, these moments elevate and form a bridge for the adherents to join a community of belief that precedes them. This publication seeks to visually expand our conception of a Black religious experience whose participants understand their religious journeys as those who “see through a glass, darkly.” This vision determines the contours and shape of their future and their understandings of the beloved community. It is our hope that after viewing these images, Black religious expressions long obscured will be more accessible, and no longer rendered invisible, nameless, or inaudible. 1. To see “through a glass”—a mirror—“darkly” refers to having an obscured or blurred vision of reality. W. E. B. Du Bois and Howard Thurman allude to St. Paul’s writings to suggest reality is not always clear, contrasting with a vision marked by clarity and divine intention. 2. Arthur C. Jones, Wade in the Water: The Wisdom of the Spirituals (Maryknoll, NY: Orbis Books, 1993). 3. Henry H. Mitchell, Black Belief: Folk Beliefs of Blacks in America and West Africa (New York: Harper &amp; Row, 1975).

he energy in Kenneth Royster’s photograph The Baptism of Ms. Robinson is startling. The drops of water flying from her outstretched hands seem to come toward the viewer as she stands upright in the moment after having been submerged in a body of water by the two men standing on either side of her. Royster captures Robinson with her eyes closed and her mouth open. She draws a breath and perhaps makes a sound. The image conveys the power of her experience of divine presence, her body expressing exhilaration in a profound moment of transformation. A different sort of energy is apparent in Jeanne Moutoussamy-Ashe’s A Moment of Silent Prayer (see page 14). Where the spiritual energy of Robinson’s baptism propels outward from Royster’s photograph toward the viewer, the face of the unidentified elderly man in Moutoussamy-Ashe’s photograph is obscured and turned away from the camera, his chin resting on his arm draped across the back of a chair or pew. We see the side of his head with most of his face in shadow, but his ear, sharp

in the light, stands out as if he were listening for God. Royster’s image of Robinson captures a moment of change as she is baptized and made new. Moutoussamy-Ashe captures what seems to be the power of enduring faith as the man communes silently with God, a presence familiar and comforting. The contrasting feelings conveyed in these two photographs highlight the artistry photographers have demonstrated in trying to capture and portray the ineffable qualities of The Baptism of Ms. Robinson, 1995 From the series Praise Kenneth Royster

In these images, we see two distinct generations of civil rights activists engaging in the Black prophetic tradition of preaching and oration to galvanize concerned citizens against anti-Black racism. Rev. Dr. Martin Luther King Jr. is seen speaking—in a

Black Lives Matter protest in Hollywood, California. While they hail from different generations, both activists employ the Black tradition of sacred rhetoric as a means for fighting injustice.

community in Keystone, West Virginia, and the other on a crowded New York City street. The two women are engaging from behind a podium, delivering messages both directly and indirectly to

bystanders. Often, women would occupy outside spaces in efforts to extend participation, while also serving as a conduit between the church and the community. 73

photographer at the New York Times. Faith has been an important part of Higgins’s personal life since his childhood and is a quality that translates into his images. Higgins tries to capture “the spirit” in all his work. In this photograph, he depicts a man performing salat, a ritual Muslim prayer that is completed five times a day. As with many of his images, this photograph shows the beauty and significance of ritual in everyday Black religious life.