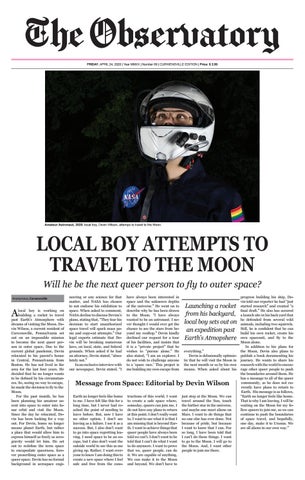 LOCAL BOY ATTEMPTS TO TRAVEL TO THE MOON Will he be the next queer person to fly to outer space?

local boy is working on building a rocket to travel past Earth’s Atmosphere with dreams of visiting the Moon. Devin Wilson, a current resident of Curwensville, Pennsylvania set out on an impossible mission to become the next queer person in outer space. Due to the current global pandemic, Devin relocated to his parent’s house in Central, Pennsylvania from Boston. He has not lived in the area for the last four years. He decided that he no longer wants to be defined by his circumstances. So, seeing no way to escape, he made the decision to fly to the Moon. For the past month, he has been planning his amateur ascent into space to enter into lunar orbit and visit the Moon. Since the day he relocated, Devin has been looking for a way out. For Devin, home no longer means planet Earth, but rather a place that would allow him to express himself as freely as zerogravity would let him. He set out to redefine the term space to encapsulate queerness, forever proscribing outer space as a queer space. Devin has no formal background in aerospace engi-

neering or any science for that matter, and NASA has chosen to not endorse his exhibition to space. When asked to comment, NASA decline to discuss Devins’s plans, stating that, “They fear his decision to start unauthorized space travel will spark mass panic and copy-cat attempts.” Our legal experts estimate that Devin will be breaking numerous laws, on local, state, and federal grounds. When asked if he had an attorney, Devin stated, “absolutely not.” In an exclusive interview with our newspaper, Devin stated, “I

have always been interested in space and the unknown depths of the universe.” He went on to describe why he has been drawn to the Moon. “I have always wanted to be an astronaut. I never thought I would ever get the chance to see the stars from beyond my rooftop.” Devin kindly declined our request for a tour of his facilities, and insists that it is a “private project” that he wishes to “pursue alone.” He also stated, “I am an explorer. I do not wish to challenge anyone to a ‘space race.’ This project is me building my own escape from

Launching a rocket from his backyard, local boy sets out on an expedition past Earth’s Atmopshere everything.” Devin is delusionally optimistic that he will visit the Moon in the next month or so by his own means. When asked about his

Message from Space: Editorial by Devin Wilson Earth no longer feels like home to me. I have felt like this for a long time, but I never had reached the point of needing to leave before. But, now I have no other option. I don’t see leaving as a failure. I see it as a success. But, I also don’t want to go into space regretting leaving. I need space to be an escape, but I also don’t want the outside world to see this as me giving up. Rather, I want everyone to know I am doing this to create a new space where I feel safe and free from the cons-

tructions of this world. I want to create a safe space where, someday, queers can join me. I do not have any plans to return at this point. I don’t really want to. I want to see what it is that I am missing that is beyond Earth. I want to achieve things that queer people have always been told we can’t. I don’t want to be told that I can’t do what I want to do anymore. I want to prove that we, queer people, can do it. We are capable of anything. We can make it to the Moon and beyond. We don’t have to

just stop at the Moon. We can travel around the Sun, touch the further star in the universe, and maybe one meet aliens on Mars. I want to do things that no one else has ever done. Not because of pride, but because I want to know that I can. For so long, I have been told that I can’t do these things. I want to go to the Moon. I will go to the Moon. And, I want other people to join me there.

progress building his ship, Devin told our reporter he had “just started research” and created “a final draft.” He also has secured a launch site in his back yard that he defended from several wild animals, including two squirrels. Still, he is confident that he can build his own rocket, create his own spacesuit, and fly to the Moon alone. In addition to his plans for the Moon, Devin also plans to publish a book documenting his journey. He wants to share his research with the world to encourage other queer people to push the boundaries around them. He has a message to all of the queer community, as he does not currently have plans to return to Earth. His message is as follows, “Earth no longer feels like home. That is why I am leaving. I will be waiting on the Moon for my fellow queers to join me, so we can continue to push the boundaries of space travel, and hopefully, one day, make it to Uranus. We are all aliens in our own way.” 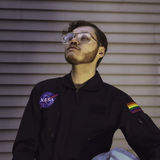