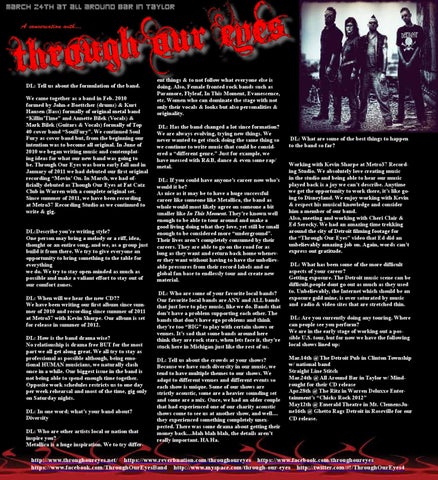 March 24th at All Around Bar in Taylor A conversation with...

Tell us about the history of the band DL: Tell us about the formulation of the band. We came together as a band in Feb. 2010 formed by John-e Boettcher (drums) &amp; Kurt Hansen (Bass) formally of original metal band “Killin’Time” and Annette Bilek (Vocals) &amp; Mark Bilek (Guitars &amp; Vocals) formally of Top 40 cover band “SoulFury”. We continued Soul Fury as cover band but, from the beginning our intention was to become all original. In June of 2010 we began writing music and contemplating ideas for what our new band was going to be. Through Our Eyes was born early fall and in January of 2011 we had debuted our first original recording “Movin’ On. In March, we had officially debuted as Though Our Eyes at Fat Catz Club in Warren with a complete original set. Since summer of 2011, we have been recording at Metro37 Recording Studio as we continued to write &amp; gig. DL:Describe you’re writing style? One person may bring a melody or a riff, idea, thought or an entire song, and we, as a group just build it from there. We try to give everyone an opportunity to bring something to the table for everything we do. We try to stay open-minded as much as possible and make a valiant effort to stay out of our comfort zones. DL: When will we hear the new CD?? We have been writing our first album since summer of 2010 and recording since summer of 2011 at Metro37 with Kevin Sharpe. Our album is set for release in summer of 2012. DL: How is the band drama wise? No relationship is drama free BUT for the most part we all get along great. We all try to stay as professional as possible although, being emotional HUMAN musicians, we naturally clash once in a while. Our biggest issue in the band is not being able to spend enough time together. Opposite work schedules restricts us to one day per week rehearsal and most of the time, gig only on Saturday nights. DL: In one word; what’s your band about? Diversity DL: Who are other artists local or nation that inspire you? Metallica is a huge inspiration. We to try differ26 http://www.throughoureyes.net/ Detroit Live Magazine Feb. 2012

ent things &amp; to not follow what everyone else is doing. Also, Female fronted rock bands such as Paramore, Flyleaf, In This Moment, Evanescence, etc. Women who can dominate the stage with not only their vocals &amp; looks but also personalities &amp; originality. DL: Has the band changed a lot since formation? We are always evolving, trying new things. We never wanted to get stuck doing the same thing so we continue to write music that could be considered a “different genre.” Just for example, we have messed with R&amp;B, dance &amp; even some rap/ metal. DL: If you could have anyone’s career now who’s would it be? As nice as it may be to have a huge successful career like someone like Metallica, the band as whole would most likely agree on someone a bit smaller like In This Moment. They’re known well enough to be able to tour around and make a good living doing what they love, yet still be small enough to be considered more “underground”. Their lives aren’t completely consumed by their careers. They are able to go on the road for as long as they want and return back home whenever they want without having to have the unbelievable pressures from their record labels and or global fan base to endlessly tour and create new material. DL: Who are some of your favorite local bands? Our favorite local bands are ANY and ALL bands that just love to play music, like we do. Bands that don’t have a problem supporting each other. The bands that don’t have ego problems and think they’re too “BIG” to play with certain shows or venues. It’s sad that some bands around here think they are rock stars, when lets face it, they’re stuck here in Michigan just like the rest of us. DL: Tell us about the crowds at your shows? Because we have such diversity in our music, we tend to have multiple themes to our shows. We adapt to different venues and different events so each show is unique. Some of our shows are strictly acoustic, some are a heavier sounding set and some are a mix. Once, we had an older couple that had experienced one of our charity acoustic shows come to see us at another show, and well.... they experienced something completely unexpected. There was some drama about getting their money back....blah blah blah, the details aren’t really important. HA Ha.

DL: What are some of the best things to happen to the band so far? Working with Kevin Sharpe at Metro37 Recording Studio. We absolutely love creating music in the studio and being able to hear our music played back is a joy we can’t describe. Anytime we get the opportunity to work there, it’s like going to Disneyland. We enjoy working with Kevin &amp; respect his musical knowledge and consider him a member of our band. Also, meeting and working with Cheri Clair &amp; Ed Serecky. We had an amazing time trekking around the city of Detroit filming footage for the “Through Our Eyes” video that Ed did an unbelievably amazing job on. Again, words can’t express out gratitude. DL: What has been some of the more difficult aspects of your career? Getting exposure. The Detroit music scene can be difficult,people dont go out as much as they used to. Unbelievably, the Internet which should be an exposure gold mine, is over saturated by music and radio &amp; video sites that are stretched thin. DL: Are you currently doing any touring. Where can people see you perform? We are in the early stage of working out a possible U.S. tour, but for now we have the following local shows lined up: Mar.14th @ The Detroit Pub in Clinton Township w/ national band Straight Line Stitch Mar.24th @ All Around Bar in Taylor w/ Mindrought for their CD release Apr.28th @ The Ritz in Warren Deluxxe Entertainment’s “Chicks Rock 2012” May12th @ Emerald Theatre in Mt. ClemensJune16th @ Ghetto Rags Detroit in Roseville for our CD release. 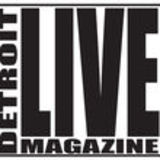