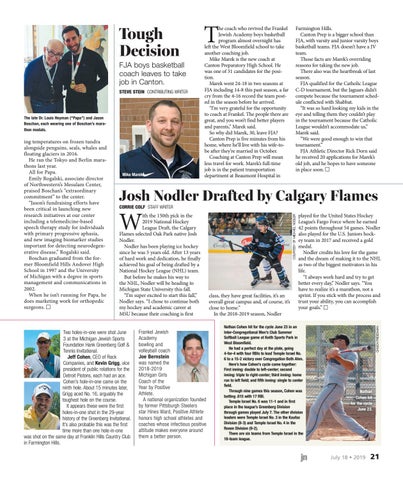 The late Dr. Louis Heyman (“Papa”) and Jason Boschan, each wearing one of Boschan’s marathon medals.

Farmington Hills. Canton Prep is a bigger school than FJA, with varsity and junior varsity boys basketball teams. FJA doesn’t have a JV team. Those facts are Marek’s overriding reasons for taking the new job. There also was the heartbreak of last season. FJA qualified for the Catholic League C-D tournament, but the Jaguars didn’t compete because the tournament schedule conflicted with Shabbat. “It was so hard looking my kids in the eye and telling them they couldn’t play in the tournament because the Catholic League wouldn’t accommodate us,” Marek said. “We were good enough to win that tournament.” FJA Athletic Director Rick Dorn said he received 20 applications for Marek’s old job, and he hopes to have someone in place soon. ■

Two holes-in-one were shot June 3 at the Michigan Jewish Sports Foundation Hank Greenberg Golf &amp; Tennis Invitational. Jeff Cohen, CEO of Rock Companies, and Kevin Grigg, vice president of public relations for the Detroit Pistons, each had an ace. Cohen’s hole-in-one came on the ninth hole. About 15 minutes later, Grigg aced No. 16, arguably the toughest hole on the course. It appears these were the first holes-in-one shot in the 29-year history of the Greenberg Invitational. It’s also probable this was the first time more than one hole-in-one was shot on the same day at Franklin Hills Country Club in Farmington Hills.

class, they have great facilities, it’s an overall great campus and, of course, it’s close to home.” In the 2018-2019 season, Nodler

played for the United States Hockey League’s Fargo Force where he earned 42 points throughout 54 games. Nodler also played for the U.S. Juniors hockey team in 2017 and received a gold medal. Nodler credits his love for the game and the dream of making it to the NHL as two of the biggest motivators in his life. “I always work hard and try to get better every day,” Nodler says. “You have to realize it’s a marathon, not a sprint. If you stick with the process and trust your ability, you can accomplish your goals.” ■

Nathan Cohen hit for the cycle June 23 in an Inter-Congregational Men’s Club Summer Softball League game at Keith Sports Park in West Bloomfield. He had a perfect day at the plate, going 4-for-4 with four RBIs to lead Temple Israel No. 6 to a 15-2 victory over Congregation Beth Ahm. Here’s how Cohen’s cycle came together: First inning: double to left-center; second inning: triple to right-center; third inning: home run to left field; and fifth inning: single to center field. Through nine games this season, Cohen was batting .615 with 17 RBI. Temple Israel No. 6 was 11-1 and in first place in the league’s Greenberg Division through games played July 7. The other division leaders were Temple Israel No. 3 in the Koufax Division (8-3) and Temple Israel No. 4 in the Rosen Division (9-2). There are six teams from Temple Israel in the 18-team league.

ith the 150th pick in the 2019 National Hockey League Draft, the Calgary Flames selected Oak Park native Josh Nodler. Nodler has been playing ice hockey since he was 5 years old. After 13 years of hard work and dedication, he finally achieved his goal of being drafted by a National Hockey League (NHL) team. But before he makes his way to the NHL, Nodler will be heading to Michigan State University this fall. “I’m super excited to start this fall,” Nodler says. “I chose to continue both my hockey and academic career at MSU because their coaching is first

ing temperatures on frozen tundra alongside penguins, seals, whales and floating glaciers in 2016. He ran the Tokyo and Berlin marathons last year. All for Papa. Emily Rogalski, associate director of Northwestern’s Mesulam Center, praised Boschan’s “extraordinary commitment” to the center. “Jason’s fundraising efforts have been critical in launching new research initiatives at our center including a telemedicine-based speech therapy study for individuals with primary progressive aphasia, and new imaging biomarker studies important for detecting neurodegenerative disease,” Rogalski said. Boschan graduated from the former Bloomfield Hills Andover High School in 1997 and the University of Michigan with a degree in sports management and communications in 2002. When he isn’t running for Papa, he does marketing work for orthopedic surgeons. ■

he coach who revived the Frankel Jewish Academy boys basketball program almost overnight has left the West Bloomfield school to take another coaching job. Mike Marek is the new coach at Canton Preparatory High School. He was one of 31 candidates for the position. Marek went 24-18 in two seasons at FJA including 14-8 this past season, a far cry from the 4-16 record the team posted in the season before he arrived. “I’m very grateful for the opportunity to coach at Frankel. The people there are great, and you won’t find better players and parents,” Marek said. So why did Marek, 30, leave FJA? Canton Prep is five minutes from his home, where he’ll live with his wife-tobe after they’re married in October. Coaching at Canton Prep will mean less travel for work. Marek’s full-time job is in the patient transportation department at Beaumont Hospital in More from The Detroit Jewish News