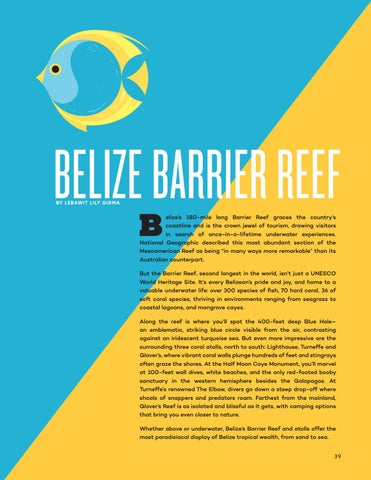 elize’s 180-mile long Barrier Reef graces the country’s coastline and is the crown jewel of tourism, drawing visitors in search of once-in-a-lifetime underwater experiences. National Geographic described this most abundant section of the Mesoamerican Reef as being “in many ways more remarkable” than its Australian counterpart. But the Barrier Reef, second longest in the world, isn’t just a UNESCO World Heritage Site. It’s every Belizean’s pride and joy, and home to a valuable underwater life: over 300 species of fish, 70 hard coral, 36 of soft coral species, thriving in environments ranging from seagrass to coastal lagoons, and mangrove cayes. Along the reef is where you’ll spot the 400-feet deep Blue Hole– an emblematic, striking blue circle visible from the air, contrasting against an iridescent turquoise sea. But even more impressive are the surrounding three coral atolls, north to south: Lighthouse, Turneffe and Glover’s, where vibrant coral walls plunge hundreds of feet and stingrays often graze the shores. At the Half Moon Caye Monument, you’ll marvel at 100-feet wall dives, white beaches, and the only red-footed booby sanctuary in the western hemisphere besides the Galapagos. At Turneffe’s renowned The Elbow, divers go down a steep drop-off where shoals of snappers and predators roam. Farthest from the mainland, Glover’s Reef is as isolated and blissful as it gets, with camping options that bring you even closer to nature. Whether above or underwater, Belize’s Barrier Reef and atolls offer the most paradisiacal display of Belize tropical wealth, from sand to sea. 39