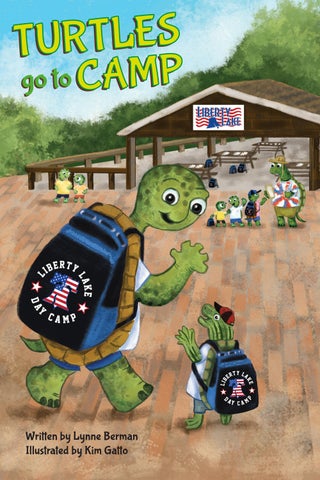 Turtles go to Camp It’s a bright and sunny day, and everyone is dreaming about the end of May. That’s because camp begins when school lets out, which makes all the kids want to scream and shout. The young Turtles daydream about summer and fun, filled with ice cream, friends, and fun in the sun! They practice the Liberty Lake song, getting ready for the first day to all sing along… “Liberty Lake is the place to be, feeling really good about being me. Liberty Lake is number one, counselors and kids having so much fun. Liberty Lake, Liberty Lake, we LOOOOVE Liberty Lake Day Camp!”

The mailman brings an envelope that is heavy and white, and the Turtles see the Liberty Lake logo that’s quite an awesome sight. As the young Turtles open it with one big tear, they find the spirit calendar, lunch menu, and first-day name tag to wear. They may be kind of worried about things that they don’t know, but as their parents read to them, they’re eager and willing to grow. They get more excited as they realize how many new friends they’ll make, as Turtles swimming, playing, dancing, and singing at Liberty Lake.

Aimee loves Fine Arts each day. She enjoys making alligators and airplanes using glue, paint, and clay. She always looks forward to the great snacks at lunch, as she picks the juiciest red apple out of the bunch.

Bud is excited to go on the bus, as it’s his first time taking a ride. He doesn’t want to miss a thing, so he’ll make sure not to hide. He walks over the Backwards Bridge to see the chickens and goats, and can’t wait to play with friends on the lake in the Paddle Boats.

Casey chose Taste Buds so that she can stir, chop and bake. Cookies, cake, or meatballs, everything tastes so great. Sometime during the summer, there will be Color War, which makes the Liberty Lakers so happy to scream and roar.

Debbie enjoys music and is always ready to dance. She can’t wait to perform on stage and looks forward to the chance. The DJ plays the music so Debbie and her friends can sing, and she can’t wait until she’s bigger, to try the giant swing.

Eva loves electives because she gets to choose, and every activity is so much fun, she knows she cannot lose. She always is adventurous and gives everything her best try, and even learned to ride a bike in the elective Learn to Ride.

Finn touched a worm as he tries to catch a fish, while the water under his feet goes squish, squish, squish. He loves all the animals in Feathers and Fur, and has so much fun petting them as they quack, wag, and purr.

Grayson feels like a big kid in the Guppy level during swim, and he loves to bounce the basketball and toss it through the rim. He runs around the baseball field and plays on the Ga-Ga courts. There is so much to play at camp, they’re all his favorite sports!

Hunter really likes to climb, and has such very high hopes. So the first elective he’ll choose when he’s old enough, is High Ropes. In the meantime, Hunter is hungry, and it’s almost time for lunch. He’ll get a hamburger and hot dog, that he loves to eat so much.

Ivy imagines the yummy tastes, as she closes her eyes and dreams, of fresh fruit on the salad bar, ice pops, and ice cream. Cold ice pops are handed out to us at the end of each hot day. Sometimes we eat them at the playground, while we sing and play!

Jacob and his friends like to drink the juice at lunch. Their counselors like to tell them jokes - they’re such a funny bunch. They jump for joy and exercise, with jump ropes in a big pack, while other campers jog around and do some jumping jacks.

Derek is a happy little preschooler, excited for his first day at Liberty Lake Day Camp. Follow him and his cute little Turtle friends as they embark on their “Best Summer Ever!” The most exciting parts about camp are meeting new friends and trying new things. Derek is so excited to learn how to swim, catch a fish, climb on the playground, and enjoy days filled with singing, playing and having so much fun. As you turn the page to each new activity, you’ll feel Derek’s excitement, confidence and friendships grow!

An excited preschool camper is embarking on his first time at camp. He meets new friends and tries new things during days filled with fun and sun. Feel his excitement and confidence grow on each page of this A-Z adventure and experience how the anxiety of young campers and parents is turned into a positive sense of comfort before summer even begins. Customize this book for your preschool campers, or school year preschool /daycare setting. For more information about creating a customized preschool book for YOUR camp ​or Publishing the book with your company, contact: Lynne at Lynne@KidzBuzzNJ.com or 609-760-7520 Kim at Kim@designsbygatto.com or 201-953-9117 KidzBuzzNJ.com