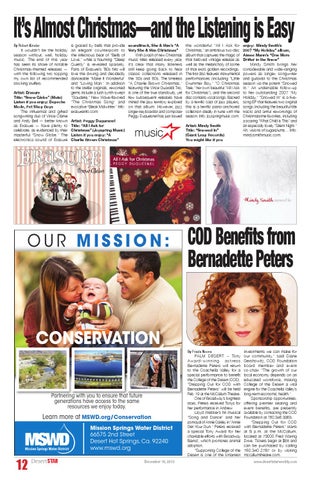 It’s Almost Christmas—and the Listening is Easy By Robert Kinsler It wouldn’t be the holiday season without, well, holiday music. The end of this year has seen its share of notable Christmas-themed releases — with the following trio topping my own list of recommended stocking stuffers.

is graced by bells that provide an elegant counterpoint to the infectious beat of “Bells of Love,” while a haunting “Sleep Quietly” is revealed sparsely. Fans of Erasure’s ’80s hits will love the driving and decidedly danceable “Make It Wonderful” and “Loving Man.” In addition to the stellar originals, reworked Artist: Erasure gems include a lush synth-swept Title: “Snow Globe” (Mute) “Gaudete,” New Wave-flavored Listen if you enjoy: Depeche “The Christmas Song” and Mode, Pet Shop Boys evocative “Bleak Midwinter.” Info: The influential and gifted erasureinfo.com. songwriting duo of Vince Clarke and Andy Bell — better known Artist: Peggy Duquesnel as Erasure — have plenty to Title: “All I Ask for celebrate, as evidenced by their Christmas” (Joyspring Music) masterful “Snow Globe.” The Listen if you enjoy: “A electronica sound of Erasure Charlie Brown Christmas”

soundtrack, She & Him’s “A Very She & Him Christmas” With a rash of new Christmas music titles released every year, it’s clear that many listeners still keep going back to hear classic collections released in the ’50s and ’60s. The timeless “A Charlie Brown Christmas,” featuring the Vince Guaraldi Trio, is one of the true standouts, yet few subsequent releases have mined the jazz territory explored on that album. However, jazz singer-keyboardist and composer Peggy Duquesnel has just issued

the wonderful “All I Ask for Christmas,” an ambitious two-disc album that captures the magic of that beloved vintage release as well as the melancholy of some of that era’s golden recordings. The first disc features instrumental performances (including “Little Drummer Boy,” “O Christmas Tree,” her own beautiful “All I Ask for Christmas”), and the second disc contains vocal songs. Backed by a terrific cast of jazz players, this is a terrific piano-anchored collection ideally in tune with the season. Info: joyspringmusic.com. Artist: Mindy Smith Title: “Snowed In” (Giant Leap Records) You might like if you

enjoy: Mindy Smith’s 2007 “My Holiday” album, Aimee Mann’s “One More Drifter in the Snow” Mindy Smith brings her considerable and wide-ranging powers as singer, songwriter and guitarist to the Christmas season via the potent “Snowed In.” An undeniable follow-up to her outstanding 2007 “My Holiday,” “Snowed In” is a fivesong EP that features two original songs (including the beautiful title track) and artful reworkings of Christmastime favorites, including a soaring “What Child is This” and an especially lovely “Silent Night.” Ah, visions of sugarplums… Info: mindysmithmusic.com.

conservation Partnering with you to ensure that future generations have access to the same resources we enjoy today.

Partnering with you to ensure that future generations have access to the same more atresources MSWD.org/Conservation we enjoy today.

By Frieda Noone PALM DESERT – Tony Award-winning actress Bernadette Peters will return to the Coachella Valley for a special performance to benefit the College of the Desert (COD). “Stepping Out for COD with Bernadette Peters” will be held Feb. 19 at the McCallum Theatre. One of Broadway’s brightest stars, Peters received Tonys for her performance in Andrew Lloyd Webber’s hit musical “Song and Dance” and her portrayal of Annie Oakley in “Annie Get Your Gun.” Peters received a special Tony Award for her charitable efforts with Broadway Barks!, which promotes animal adoption. “Supporting College of the Desert is one of the smartest

investments we can make for our community,” said Diane Gershowitz, COD Foundation board member and event co-chair. “The growth of our local economy depends on an educated workforce, making College of the Desert a vital engine for the Coachella Valley’s long-term economic health.” Sponsorship opportunities, offering premier seating and event benefits, are presently available by contacting the COD Foundation at 760.346.3363. “Stepping Out for COD with Bernadette Peters” starts at 8 p.m. at the McCallum, located at 73000 Fred Waring Drive. Tickets begin at $65 and can be purchased by calling 760.340.2787 or by visiting mccallumtheatre.com. www.desertstarweekly.com 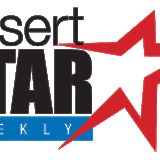