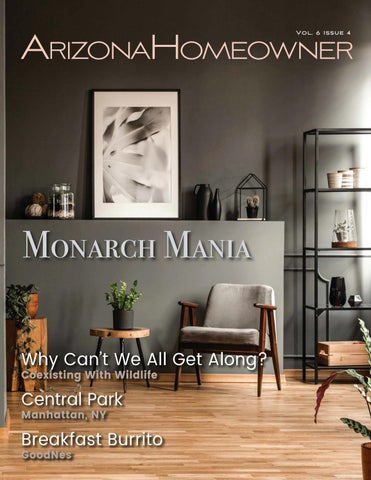 Monarch Mania Why Canâ&amp;#x20AC;&amp;#x2122;t We All Get Along? Coexisting With Wildlife

eems like every day there’s a viral video about a renegade bear or mountain lion that has found its way into someone’s backyard or even into their kitchen. Due to climate change and urban sprawl, more wild animals are meandering into neighborhoods and heavily populated areas. Why is this happening and how can we keep the peace and share the planet?

Central Park is an urban park in Manhattan, New York and welcomes on average 40 million visitors each year. The park was originally built to improve public health and contribute greatly to the formation of a civil society. Today, we may know it as an iconic national treasure, the park has had a troublesome history. From the early 1960s to late 1970s, the park was barren, unkept and a dangerous ruin full of dust bowls, garbage, graffiti and crime. With help from the community and citizen activism, the park has blossomed and is now the beautiful landmark that we know today. Planning a trip to the Big Apple? The park is and has been free since 1958 and hosts a myriad of events every month. Source: CentralParkNYC.org

As wild animals find it harder and harder to find water and food due to drought and weather unpredictability brought on by climate change, they wander farther into more populated areas searching for sustenance. For us humans, depending on where you live, that could mean finding a fox, a raccoon, a mountain lion, or even a bear scavenging in your yard or right outside your door. Adding to the problem, more and more humans are choosing to live in more remote areas, displacing animals from their homes. So what can be done to safely coexist with wildlife? First off, experts say to make sure homeowners aren’t unintentionally luring animals right to their doors. For example, don’t leave garbage or recycling cans outside for animals to get into. If you have an outdoor grill, move it inside a garage at night if possible or be sure it is cleaned of food and grease, both of which will surely attract wildlife. Birdfeeders may attract animals other than your feathered friends and may need to be moved or put away. The same goes for pet food and bowls, which should always be stored indoors. Of course, even when taking these precautions animals may still find a way to enter your area. Whether it’s a fox that keeps hanging around your pets, a squirrel that has entered your attic, or a bear that has taken a liking to your pool, you need to take action. Experts recommend staying away from the unwanted visitor and calling an animal removal professional to ensure both your and the animal’s safety. After all, no one wants to see any creature— humans included, of course—harmed in any way. The goal is to live side by side in harmony. To find a list of recommended wildlife rescue professionals in your state, visit the Humane Society’s web site at www. HumaneSociety.org/resources/ how-find-wildlife-rehabilitator. Bottom line? Unless it’s a small and safe job, contact a wildlife expert who will remove the animal safely and humanely and help ensure the visitor doesn’t come back again.

rom Prince Harry and Meghan Markle to the Netflix television series The Crown and the BBC’s Victoria, it seems Americans have gone gaga for everything related to the British monarchy. Of course, ever since Princess Diana tied the knot with Prince Charles many years ago, America has had its own unique love affair with the British royals. (Strange, is it not, since we were the ones to wage war to get out from under the taxing thumb of King George I?) Of course, that was all long ago, and now, with the new young royals’ growing families, we wonder if this overseas obsession will wane anytime soon. After all, Americans love the birth of royal babies almost as much as royal weddings!

the crown should be done away with as its wealth and power were derived from an era of British colonialism. Those Brits who do like the monarchy prefer Prince Harry and Queen Elizabeth above the others, according to the poll. In America, Kate Middleton was the top royal pick. Of course, the royal family does bring in loads of tourism money to Great Britain with little to no cost to the British people. With Queen Elizabeth still at the helm in her 90s, it is safe to say she has had an extremely positive influence on her country. And with the current economic and political uncertainty of Brexit, perhaps the certainty and steadfastness of the British monarchy are exactly what the country needs right now. Long live the Queen, indeed!

But just why are people obsessed with the British monarchy? Perhaps in the US, we are intrigued simply because we don’t have our own royal family with its incredibly long and illustrious history. Because it’s something unfamiliar, traditional, and old-fashioned it holds a certain nostalgic fascination for us. We Americans are also obsessed with celebrities in case you weren’t aware of that. And the Windsors are definitely the celebs of the UK.

We’re also not alone in our fondness: A recent poll found the British royals were most popular with people in Romania, Saudi Arabia, India, and the United States. Which countries viewed the royals least favorably? That would be Spain and Argentina. (As to why, we can only guess.) Britons themselves have a love-hate relationship with their kings and queens. And not all of the British people favor the monarchy, with some 15 to 20 percent saying

DIRECTIONS Heat oil in a medium skillet over medium heat. Add potatoes and bouillon; cook, stirring frequently, for 5 to 7 minutes or until potatoes are cooked through and soft. Add tomatoes; cook for 2 minutes. Stir in eggs. Fold mixture until eggs are cooked through. Spread 2 tablespoons refried beans over middle of each tortilla. Sprinkle each with 1 tablespoon cheese. Top tortillas evenly down the middle with egg/ potato mixture. Fold tortilla sides toward the center, securing the filling. Roll the bottom of the tortilla towards the top, making a burrito. Cut in half. Serve with salsa, if desired.

providing “Service that Exceeds Your Expectations”. Buying a home is the largest investment most people make in their lifetime. In today’s challenging real estate market selecting the right Realtor is crucial. Whether you are buying or selling, we have the credentials to help make your transaction as stress free as possible.

PMG - Premier Marketing Group : An elite network of proven Real Estate Executives working within the Realty Executives Phoenix family. Selling over a billion dollars annually, this group understands the power of networking and the importance of relationships. This team approach to buying and selling real estate ensures every client receives a level of guidance, knowledge and professionalism, unrivaled in the industry.

Ready to buy or sell, call Chris and Dawn today! 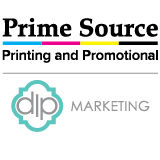