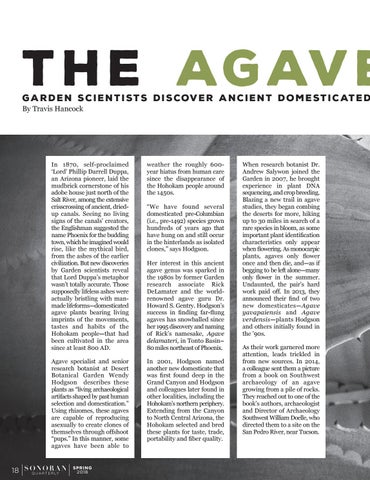 In 1870, self-proclaimed ‘Lord’ Phillip Darrell Duppa, an Arizona pioneer, laid the mudbrick cornerstone of his adobe house just north of the Salt River, among the extensive crisscrossing of ancient, driedup canals. Seeing no living signs of the canals’ creators, the Englishman suggested the name Phoenix for the budding town, which he imagined would rise, like the mythical bird, from the ashes of the earlier civilization. But new discoveries by Garden scientists reveal that Lord Duppa’s metaphor wasn’t totally accurate. Those supposedly lifeless ashes were actually bristling with manmade lifeforms—domesticated agave plants bearing living imprints of the movements, tastes and habits of the Hohokam people—that had been cultivated in the area since at least 800 AD.

weather the roughly 600year hiatus from human care since the disappearance of the Hohokam people around the 1450s.

Agave specialist and senior research botanist at Desert Botanical Garden Wendy Hodgson describes these plants as “living archaeological artifacts shaped by past human selection and domestication.” Using rhizomes, these agaves are capable of reproducing asexually to create clones of themselves through offshoot “pups.” In this manner, some agaves have been able to

In 2001, Hodgson named another new domesticate that was first found deep in the Grand Canyon and Hodgson and colleagues later found in other localities, including the Hohokam’s northern periphery. Extending from the Canyon to North Central Arizona, the Hohokam selected and bred these plants for taste, trade, portability and fiber quality.

“We have found several domesticated pre-Columbian (i.e., pre-1492) species grown hundreds of years ago that have hung on and still occur in the hinterlands as isolated clones,” says Hodgson. Her interest in this ancient agave genus was sparked in the 1980s by former Garden research associate Rick DeLamater and the worldrenowned agave guru Dr. Howard S. Gentry. Hodgson’s success in finding far-flung agaves has snowballed since her 1995 discovery and naming of Rick’s namesake, Agave delamateri, in Tonto Basin– 80 miles northeast of Phoenix.

When research botanist Dr. Andrew Salywon joined the Garden in 2007, he brought experience in plant DNA sequencing, and crop breeding. Blazing a new trail in agave studies, they began combing the deserts for more, hiking up to 30 miles in search of a rare species in bloom, as some important plant identification characteristics only appear when flowering. As monocarpic plants, agaves only flower once and then die, and—as if begging to be left alone—many only flower in the summer. Undaunted, the pair’s hard work paid off. In 2013, they announced their find of two new domesticates—Agave yavapaiensis and Agave verdensis—plants Hodgson and others initially found in the '90s. As their work garnered more attention, leads trickled in from new sources. In 2014, a colleague sent them a picture from a book on Southwest archaeology of an agave growing from a pile of rocks. They reached out to one of the book’s authors, archaeologist and Director of Archaeology Southwest William Doelle, who directed them to a site on the San Pedro River, near Tucson. 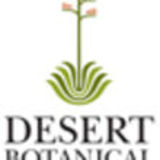 Desert Botanical Garden quarterly magazine featuring the latest happenings, as well as fun tips and recipes inspired by the Garden.

Desert Botanical Garden quarterly magazine featuring the latest happenings, as well as fun tips and recipes inspired by the Garden.