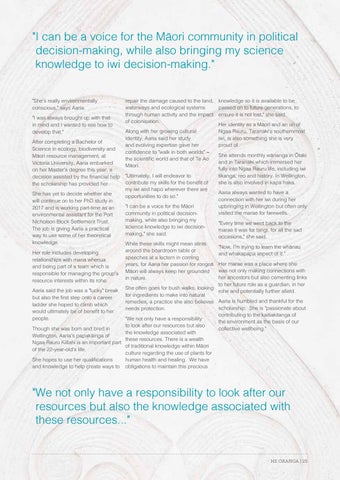 "I can be a voice for the Māori community in political decision-making, while also bringing my science knowledge to iwi decision-making." "She's really environmentally conscious," says Aaria.

repair the damage caused to the land, knowledge so it is available to be waterways and ecological systems passed on to future generations, to through human activity and the impact ensure it is not lost," she said. "I was always brought up with that of colonisation. Her identity as a Māori and an uri of in mind and I wanted to see how to Along with her growing cultural Ngaa Rauru, Taranaki's southernmost develop that." identity, Aaria said her study iwi, is also something she is very After completing a Bachelor of proud of. and evolving expertise gave her Science in ecology, biodiversity and confidence to "walk in both worlds" − She attends monthly wānanga in Ōtaki Māori resource management, at the scientific world and that of Te Ao and in Taranaki which immersed her Victoria University, Aaria embarked Māori. fully into Ngaa Rauru life, including iwi on her Master’s degree this year, a tikanga, reo and history. In Wellington, "Ultimately, I will endeavor to decision assisted by the financial help she is also involved in kapa haka. contribute my skills for the benefi t of the scholarship has provided her. my iwi and hapū wherever there are Aaria always wanted to have a She has yet to decide whether she opportunities to do so." connection with her iwi during her will continue on to her PhD study in upbringing in Wellington but often only "I can be a voice for the Māori 2017 and is working part-time as an visited the marae for farewells. community in political decisionenvironmental assistant for the Port making, while also bringing my Nicholson Block Settlement Trust. "Every time we went back to the science knowledge to iwi decisionThe job is giving Aaria a practical marae it was for tangi, for all the sad making," she said. way to use some of her theoretical occasions," she said. knowledge. While these skills might mean stints "Now, I'm trying to learn the whānau around the boardroom table or Her role includes developing and whakapapa aspect of it." speeches at a lectern in coming relationships with mana whenua years, for Aaria her passion for rongoā Her marae was a place where she and being part of a team which is was not only making connections with responsible for managing the group's Māori will always keep her grounded her ancestors but also cementing links in nature. resource interests within its rohe. to her future role as a guardian, in her She often goes for bush walks, looking Aaria said the job was a "lucky" break rohe and potentially further afield. for ingredients to make into natural but also the first step onto a career remedies, a practice she also believes Aaria is humbled and thankful for the ladder she hoped to climb which scholarship. She is "passionate about needs protection. would ultimately be of benefit to her contributing to the kaitiakitanga of people. "We not only have a responsibility the environment as the basis of our to look after our resources but also collective wellbeing." Though she was born and bred in the knowledge associated with Wellington, Aaria’s papakāinga of these resources. There is a wealth Ngaa Rauru Kiitahi is an important part of traditional knowledge within Māori of the 22-year-old's life. culture regarding the use of plants for She hopes to use her qualifications human health and healing. We have and knowledge to help create ways to obligations to maintain this precious

"We not only have a responsibility to look after our resources but also the knowledge associated with these resources..." 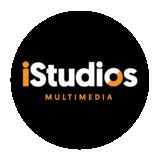 Parininihi ki Waitotara Incorporation magazine. In this issue we acknowledge outgoing CEO Dion Tuuta, report on performance to date from the...

Parininihi ki Waitotara Incorporation magazine. In this issue we acknowledge outgoing CEO Dion Tuuta, report on performance to date from the...