The Vernacularist: The Environmental Issue 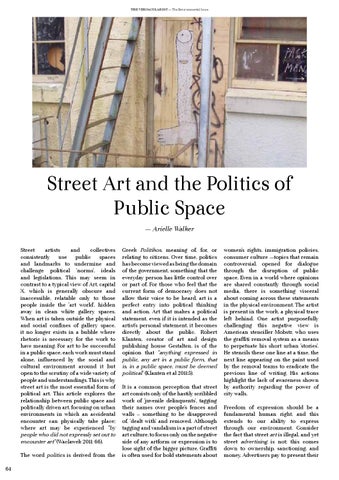 tHE VERNACULARIST — The Environmental Issue

Street Art and the Politics of Public Space — Arielle Walker Street artists and collectives consistently use public spaces and landmarks to undermine and challenge political ‘norms’, ideals and legislations. This may seem in contrast to a typical view of Art, capital A ‘ ’, which is generally obscure and inaccessible, relatable only to those people inside the ‘art world’, hidden away in clean white gallery spaces. When art is taken outside the physical and social confines of gallery space, it no longer exists in a bubble where rhetoric is necessary for the work to have meaning. For art to be successful in a public space, each work must stand alone, influenced by the social and cultural environment around it but open to the scrutiny of a wide variety of people and understandings. This is why street art is the most essential form of political art. This article explores the relationship between public space and politically driven art, focusing on urban environments in which an accidental encounter can physically take place; where art may be experienced “by people who did not expressly set out to encounter art” (Waclawek 2011: 66). The word politics is derived from the 64

Greek Politikos, meaning of, for, or relating to citizens. Over time, politics has become viewed as being the domain of the government, something that the everyday person has little control over or part of. For those who feel that the current form of democracy does not allow their voice to be heard, art is a perfect entry into political thinking and action. Art that makes a political statement, even if it is intended as the artist’s personal statement, it becomes directly about the public. Robert Klanten, creator of art and design publishing house Gestalten, is of the opinion that “anything expressed in public, any art in a public form, that is, in a public space, must be deemed political” (Klanten et al 2011:5). It is a common perception that street art consists only of the hastily scribbled work of ‘juvenile delinquents’, tagging their names over people’s fences and walls – something to be disapproved of, ‘dealt with’ and removed. Although tagging and vandalism is a part of street art culture, to focus only on the negative side of any artform or expression is to lose sight of the bigger picture. Graffiti is often used for bold statements about

women’s rights, immigration policies, consumer culture —topics that remain controversial, opened for dialogue through the disruption of public space. Even in a world where opinions are shared constantly through social media, there is something visceral about coming across these statements in the physical environment. The artist is present in the work, a physical trace left behind. One artist purposefully challenging this negative view is American stenciller Mobstr, who uses the graffiti removal system as a means to perpetuate his short urban ‘stories’. He stencils these one line at a time, the next line appearing on the paint used by the removal teams to eradicate the previous line of writing. His actions highlight the lack of awareness shown by authority regarding the power of city walls. Freedom of expression should be a fundamental human right, and this extends to our ability to express through our environment. Consider the fact that street art is illegal, and yet street advertising is not: this comes down to ownership, sanctioning, and money. Advertisers pay to present their

The Vernacularist: The Environmental Issue 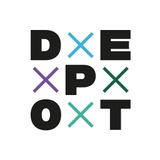