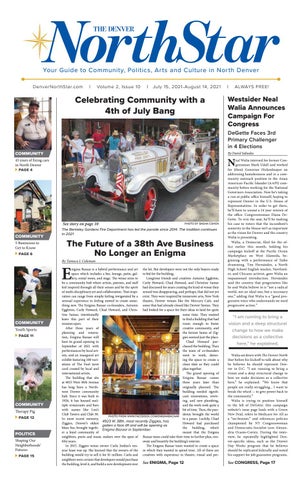 Your Guide to Community, Politics, Ar ts and Culture in Nor th Denver DenverNor thStar.com

Celebrating Community with a 4th of July Bang

COMMUNITY 5 Businesses to Get to Know PAGE 6

The Berkeley Gardens Fire Department has led the parade since 2014. The tradition continues in 2021

The Future of a 38th Ave Business No Longer an Enigma

nigma Bazaar is a hybrid performance and art the lot. But developers were not the only buyers ready space which includes a bar, lounge, patio, gal- to bid for the building. lery, rental room, and stage. The venue aims to Longtime friends and creatives Autumn Eggleton, be a community hub where artists, patrons, and staff Carly Howard, Chad Howard, and Christine Samar feel inspired through all their senses and by the spirit had discussed for years creating the kind of venue they of multi-disciplinary art and collaboration. That inspi- sensed was disappearing, and perhaps, that did not yet ration can range from simply feeling invigorated by a exist. They were inspired by immersive arts, New York sensual experience to feeling moved to create some- theatre, Denver venues like the Mercury Cafe, and thing new. The Enigma Bazaar co-founders, Autumn some that had already closed like Denver Syntax. They Eggleton, Carly Howard, Chad Howard, and Chris- had looked for a space for their ideas to land for quite tine Samar, intentionally some time. They wanted leave this part of their to find a building that had mission open. room enough to foster After three years of creative community, and planning and renovathe former home of Ziggies seemed just the place. tion, Enigma Bazaar will Chad Howard purhost its grand opening in September of 2021 with chased the building. Then performances by local artthe team of co-founders ists, and an inaugural art went to work, demoexhibit featuring 100 variing the space to create a ations of The Fool tarot clean slate so they could plan together. card created by local and international artists. The grand opening of Enigma Bazaar comes The building that sits three years later than at 4923 West 38th Avenue originally planned. The has long been a Northwest Denver community building needed significant renovations, rewirhub. Since it was built in 1926, it has housed muling, and new plumbing, tiple restaurants and bars and the work took quite a bit of time. Then, the panwith names like Lou’s Club Tavern and Club 38. demic brought the world PHOTO FROM WWW.FACEBOOK.COM/ENIGMABAZAAR In most recent memory, to a pause. Luckily, Chad 4923 W. 38th, most recently Ziggies, has Howard had purchased Ziggies, Denver’s oldest gotten a face lift and will be opening as the building, which blues bar, brought togethEnigma Bazaar in September. er a loyal community of meant that the Enigma neighbors, poets and music makers over the span of Bazaar team could take their time to further plan, renovate and beautify the building’s interior. fifty years. The Enigma Bazaar team wanted to create a space In 2017, Ziggies venue owner Carla Jordan’s tenyear lease was up. She learned that the owners of the in which they wanted to spend time. All of them are building would try to sell it for $1 million. Carla and creatives with experience in theatre, visual and perneighbors were certain that developers would purchase the building, level it, and build a new development over See ENIGMA, Page 12

eal Walia interned for former Congressman Mark Udall and worked for (then) Governor Hickenlooper on addressing homelessness and in a community outreach position to the Asian American Pacific Islander (AAPI) community before working for the National Governors Association. Now he’s taking a run at public office himself, hoping to represent Denver in the U.S. House of Representatives. In order to get there, he’ll have to unseat a 24 year veteren of the office: Congresswoman Diana DeGette. To win the seat, he’ll be making his case to voters that the incumbent&#39;s seniority in the House isn’t as important as the vision for Denver and the country Walia is presenting. Walia, a Democrat, filed for the office earlier this month, holding his campaign kickoff at the Pacific Ocean Marketplace on West Alameda, beginning with a performance of Taiko drumming. Tim Hernández, a North High School English teacher, Northsider, and Chicano activist, gave Walia an impassioned introduction. Hernández said the country that progressives like he and Walia believe in is “not a radical world, not an ideal one, but a necessary one,” adding that Walia is a “good progressive voice who understands we need progressive action.” 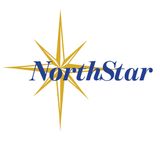