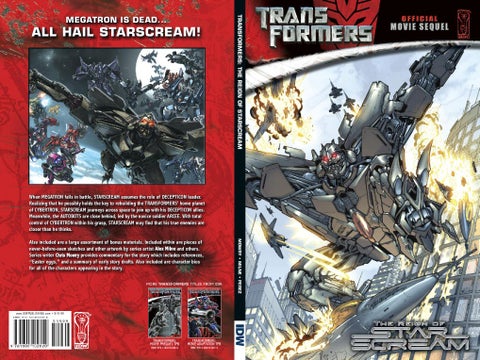 TRANSFORMERS: THE REIGN OF STARSCREAM

When MEGATRON falls in battle, STARSCREAM assumes the role of DECEPTICON leader. Realizing that he possibly holds the key to rebuilding the TRANSFORMERS’ home planet of CYBERTRON, STARSCREAM journeys across space to join up with his DECEPTICON allies. Meanwhile, the AUTOBOTS are close behind, led by the novice soldier ARCEE. With total control of CYBERTRON within his grasp, STARSCREAM may find that his true enemies are closer than he thinks.

Also included are a large assortment of bonus materials. Included within are pieces of never-before-seen sketches and other artwork by series artist Ale x Milne and others. Series writer Chris Mowr y provides commentary for the story which includes references, “Easter eggs,” and a summary of early story drafts. Also included are character bios for all of the characters appearing in the story.

The story features a large cast of both well-known and obscure characters. Some were even created exclusively for this story. Presented here are character descriptions for 33 of the most prominently-featured characters in the story.

STARSCREAM Commander of the Decepticon attack forces and arguably one of their most lethal warriors. Even though he is loyal to Megatron, Starscream disagrees with his leader’s obsession with the Allspark. He believes that the Allspark could not only rebuild Cybertron, but give him the opportunity to rule over the planet. While his words are optimistic, his intentions are not to be trusted.

ARCEE Once a member of the Autobots’ science team and assistant to Ratchet, Arcee never really stood out as being the “soldier” type. When the Decepticon forces emerged and the battle for the Allspark began, this Autobot quickly developed skills to be reckoned with. Arcee was assigned to work with Cliffjumper and his team as they investigate a mysterious ship on the planet Mars.

STORY COMMENTARY The following is a guide to any inside jokes or references that you may or may not understand as you read the story. It explains some of the reasons why things were included into the story and why some things were not. PAGE 7, PANEL 1: Ryall’s contribution to the story—a line from Star Trek III: The Search for Spock. My contribution to this panel was giving Prowl something to say. PAGE 7, PANEL 2: Jazz’s line about “shenanigans” was my attempt to give him some of his old character back. I believe the original line was “…if they try to flex on the locals” or something like that, but since I really didn’t like his character in the movie, I wanted to hear Scatman just one more time. PAGE 9, PANEL 4: The Eshems Nebula is named after someone very important to me. PAGE 10, PANEL 6: The small TINK sound effect is my homage to the infamous Ford Pinto scene in the movie Top Secret!

PAGE 17, PANEL 2: The only lines Starscream has in the film, and key for his character development. He’s not saying “glad to see you’re alive, Megatron. Now turn around so I can stab you in the back!” PAGE 21, PANEL 4: Originally, Starscream was going to say “BRING IT!” Brought on by the crowd at Botcon 2007 when Tyrese Gibson walked in to our screening of the film. Quite a few people yelled that out. PAGE 23, PANEL 2: J.R.’s Toys is named after my friend, who has an amazing toy collection. The truck is named after my friend Brian, a visual effects guy who works in the motion picture industry.

PAGE 11: The Decepticon’s ship is not called NEMESIS. Instead, it has no name and is whatever you want to call it. PAGE 14, PANEL 2: Ryall and I wanted to have a series of continuing references in each issue. One of which was Depeche Mode albums. Here, Some Great Reward is used. Sadly, this was the first and last reference to the albums. PAGE 16, PANEL 3: BRAWL reports in. The only reason this page is in the book, is to correct this error. Sometimes flashbacks are good, no?

PAGE 25, PANEL 1: The truck is named after the original Starscream (well, his voice at least), Chris Latta. I had thought about putting his name on the F-22’s canopy, but didn’t want to bring on the wrath of Generation One loyalists!

Preview of Transformers Reign of Starscream TPB due in stores November 19.