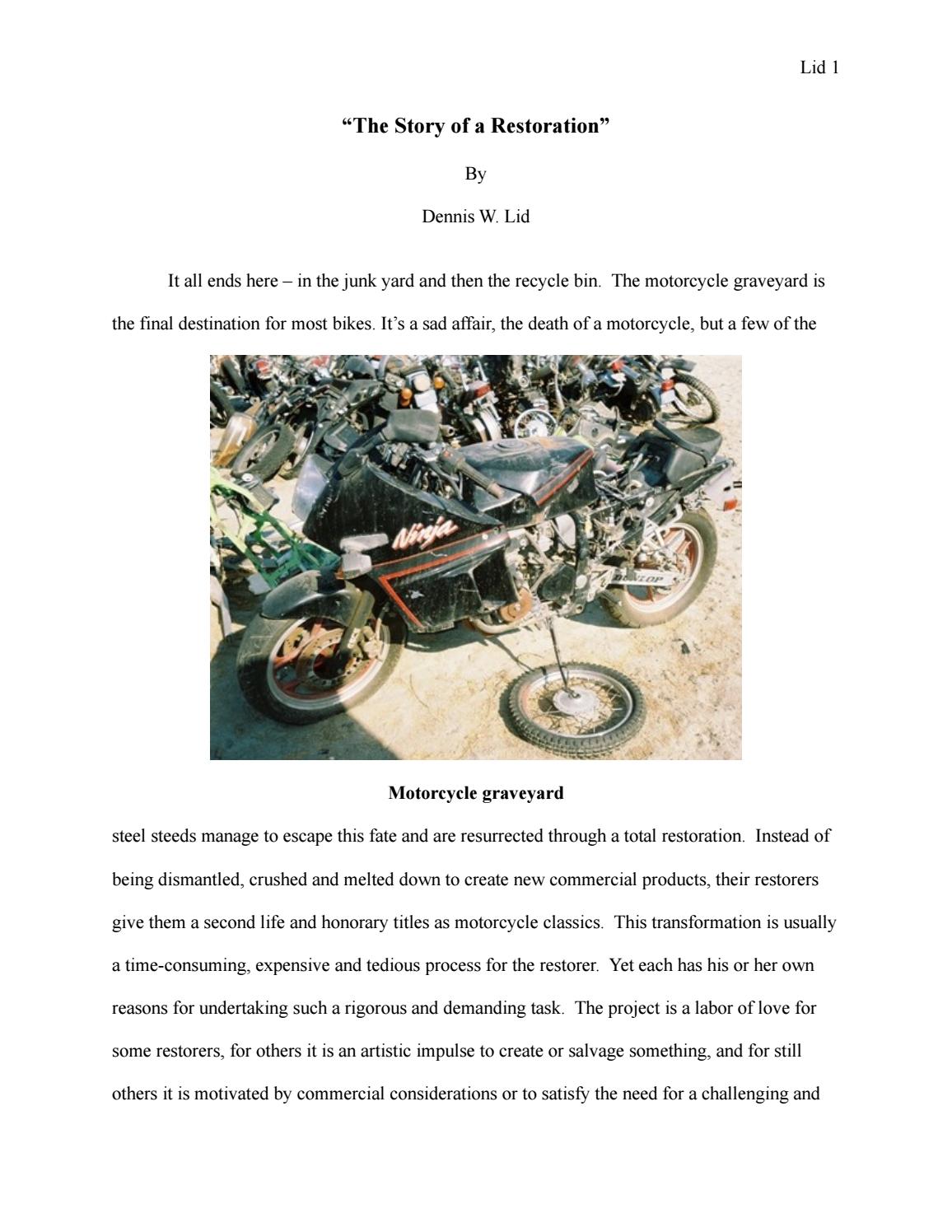 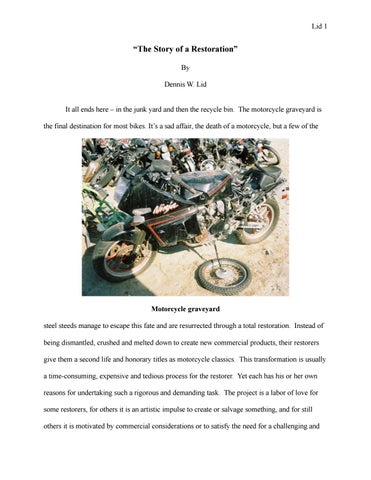 “The Story of a Restoration” By Dennis W. Lid It all ends here – in the junk yard and then the recycle bin. The motorcycle graveyard is the final destination for most bikes. It’s a sad affair, the death of a motorcycle, but a few of the

Motorcycle graveyard steel steeds manage to escape this fate and are resurrected through a total restoration. Instead of being dismantled, crushed and melted down to create new commercial products, their restorers give them a second life and honorary titles as motorcycle classics. This transformation is usually a time-consuming, expensive and tedious process for the restorer. Yet each has his or her own reasons for undertaking such a rigorous and demanding task. The project is a labor of love for some restorers, for others it is an artistic impulse to create or salvage something, and for still others it is motivated by commercial considerations or to satisfy the need for a challenging and

Lid 2 constructive project. Truly, for most owner/restorers, it is a combination of these motivations that drives them. What follows is a rendition of one such resurrection. It is the story of one man’s motorcycle restoration from beginning to end. He is a Certified Public Accountant (CPA) from Phoenix, Arizona by the name of Ken Dusseau; his bike is a 1975 Norton 850cc Commando Mark III Roadster. It is now a fully restored prize-winning classic motorcycle. Ken made it so by his meticulous rebuild and restoration of the Norton Commando 850cc Roadster.

Ken has been an avid car and motorcycle enthusiast all his life and was looking for a worthwhile project to work on during his days off. Time was especially heavy on his hands after his divorce. He mentioned this desire for a new task to a Ken Dusseau

client who knew of Ken’s expertise in restoring old

automobiles. The client offered Ken a challenging project in the form of an old, classic motorcycle in pieces for $1000. The bike’s pieces were literally contained in several boxes. The parts had all the earmarks of a classic, but the bike had to be completely rebuilt. Some pieces were missing or broken, others were bent, rusted and corroded. The disassembled and

Lid 3 neglected iron horse was in bad shape. Ken had never rebuilt a motorcycle but accepted the challenge, bought the bike parts and became the Norton Commando’s new owner and future restorer – an old-timer, a CPA and now a “bike nut” of a restorer.

A bike in pieces contained in boxes with some parts bent or broken and others rusted. Now it was time to put the puzzle together. First Ken had to figure out which pieces were missing, and then he had to replace them.

Lid 4 Fortunately, Ken had the help of the client, his brother and some motorcycle parts distributors that still carried miscellaneous Norton parts. They all contributed to the effort of finding and replacing the missing and broken parts. Thereafter, the bent pieces had to be straightened, the rusted and corroded parts cleaned, polished or refinished. Ken made steady, though tediously slow, progress on the bike at his work bench in the garage and on the bike platform. Each piece of the Norton Commando was carefully rehabilitated and put in place.

evolving bike The bike frame and parts began to take discernable and recognizable shape as a motorcycle. It was while accomplishing these rebuilding tasks that Ken discovered one of the most expensive drawbacks of the restoration process â&amp;#x20AC;&amp;#x201C; that of the astronomical cost of having parts rechromed and of having certain specialized Pieces to be re-chromed and modules rebuiltâ&amp;#x20AC;Ś pieces and modules refurbished or rebuilt. The gas tank and electric starter are cases in point, as are the handlebars, control levers, suspension system, instrument pods, exhaust pipes, rims and spokes. Although Ken paid only $1000.00 for the whole motorcycle in pieces, the cost for painting and refinishing the gas tank alone was $500.00. Rebuilding the starter motor cost another $500.00 while the instrument pods were less expensive to rehabilitate at $300.00. One can easily see how the price tag for reconstructing a classic

Lid 5 motorcycle and restoring it to mint condition can, indeed, be a very costly proposition. Even considering the free technical advice and discount prices on

some of the missing or broken parts from experts and suppliers like “Old Brits,” Ella couldn’t greatly alleviate the high cost of total restoration. Add to this the tediousness of tasks like lacing the wheels and rims with spokes and the bike rehabilitation is not only sufficient to practically bankrupt the restorer, but to drive him insane as well. The result of all the blood, sweat, tears and cost emerged as a classic motorcycle fully restored. The final product of the motorcycle reconstruction effort and its proud but exhausted restorer were exhibited at the March 16, 2008, 24th Annual Antique and Classic Motorcycle Show and Swap Meet at the Al Zaribah Shrine Auditorium grounds in Phoenix, Arizona. The

Lid 6 show was sponsored by the Antique and Classic and Motorcycle Enthusiasts Association.

Lid 7 year and model bike was the last in a long line of Norton Commando motorcycles, with the exception of a limited number of models made in ’76 for the European market. It was the only Commando produced with front and rear disc brakes and with an electric starter. The bike has a top end of about 120 mph and was one of the top racing bikes of its time with its 60 horsepower, 8.5 to 1 compression ratio and weight of 465 pounds. Some of the other innovations on the 1975 Commando were the left-hand shift lever, rear disc brake, crush rubber on the rear hub, oil seal rather than O ring on the gear box, longer rear swing arm, inspection cover for timing chain and a hinged seat. These were in addition to its other firsts. The work is done; the project is completed. Ken won the 24th Annual Antique and Classic Motorcycle Show first place trophy for Modern Classics, 1966 – 1980. What now? What new project lies ahead for Ken Dusseau? Would he do this same project over again knowing what he now knows? His answer is a resounding “No!” But, he hesitantly added that he might take a crack at rebuilding a Kawasaki RE-2 Motorcycle with rotary Wankel engine. Ken’s just a glutton for punishment . . . but what a restorer he is. Like “The Old Man and the Sea,” Ken Dusseau isn’t finished yet. Although he has plenty of years behind him, his zest for life and young at heart attitude will surely lead to his next “Story of a Restoration.” ### This is the story of the rebuilding of a 1975 Norton Commando 850 cc motorcycle from scratch. The restorer of this classic bike had never rebuilt a motorcycle before this first attempt. He bought the bike in several boxes of separate pieces at a very cheap price, but he was not even sure if he had all the parts or if they were still functional. He somehow managed to piece things together and rebuild the bike to its original condition - and it worked.