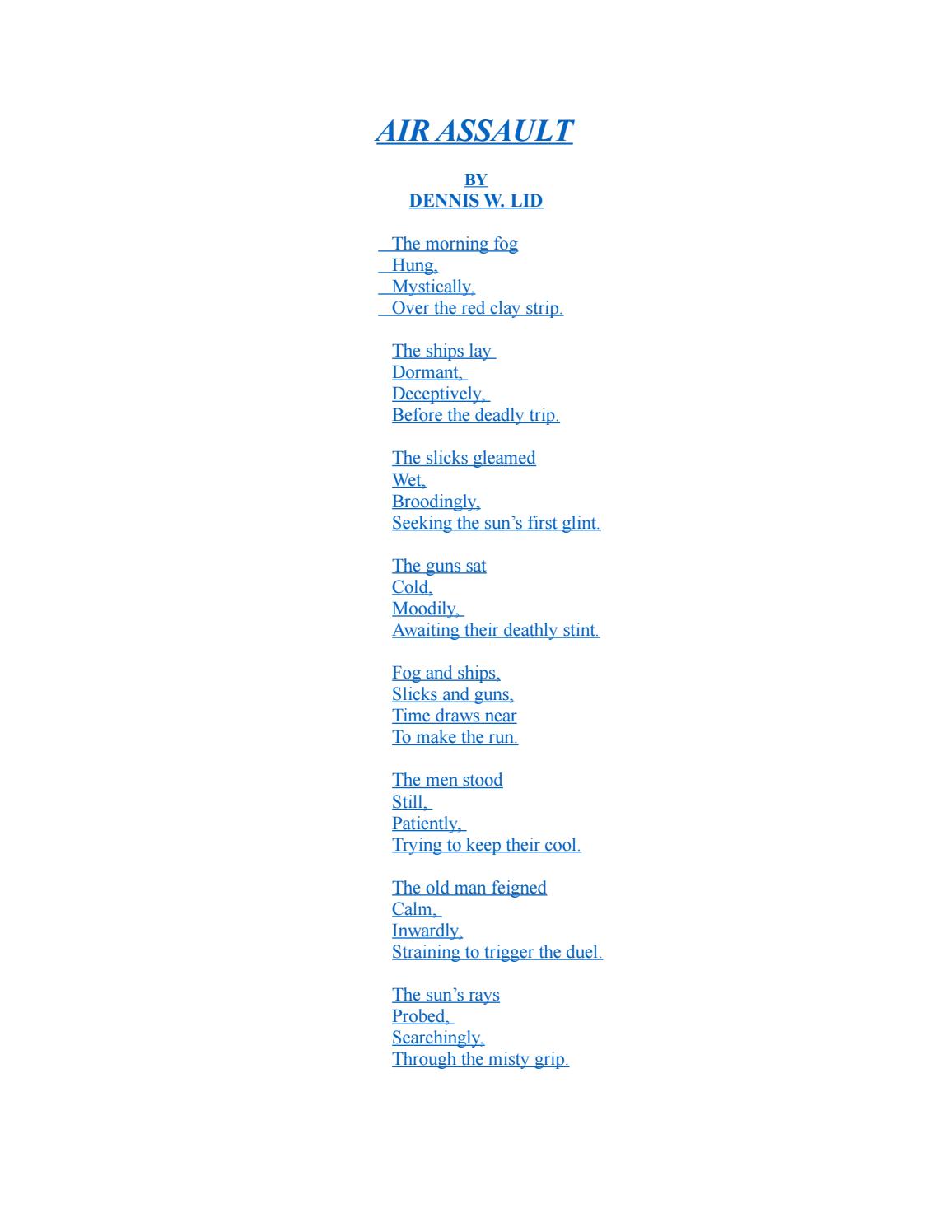 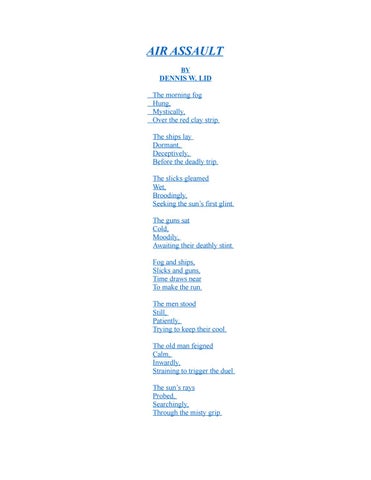 The air burnt Clear, Permissively, Prompting action on the strip. Men and leader See the sun; Now it’s time To start the run. The CO’s order Barked, Commandingly, Setting action to the scene. The ships’ motors Coughed, Reluctantly, Spinning blades to silver sheen. The special teams Mounted, Anxiously, Intent to meet the enemy. The rotor blades Strained, Triumphantly, Propelling all to destiny. Order and team, Motor and blade, Action is taken To launch the raid. The ships flew High, Steadily, Seeking out the landing zone. All eyes looked Down, Searchingly, All ears were racked with engine drone.

The landing site Fixed, Unerringly, The ships descended to the spot. The gunsâ&amp;#x20AC;&amp;#x2122; anger Blazed, Voraciously, Because the landing zone was hot. Ships in flight, Eyes on site, Guns blazed forth With deadly might. The slicks went In, Fearlessly, The teams debarked and met the foe. The ships took Flight, Successfully, By breaking right and keeping low. They took some Hits, Luckily, No major damage was sustained. The ships reGrouped, Dauntlessly, Heading home though teams remained. The slicks went in And made the hit, Re-grouped again But shook a bit. They all looked Back, Anxiously, For signs of team security.

The teams fought On, Aggressively, Baptized in bloody purity. A trail of Corpses, Prophetically, Proclaimed the cost of victory. The beaten Foe, Despairingly, Withdrew from glorious history. All the teams Fought the foe; The enemy losses Professed their woe. The sound of Battle, Reluctantly, Gave way to calm serenity. The battle Won, Victoriously, Yet no team formed an entity. The old man Lay, Lifelessly, With jungle canopy his vault. The men were Mute, Respectfully, Viewing impact of air assault. The battle won, The old man dead, Assault by air Put us ahead. (Drafted: Oct. 1969; Final: Oct. 2002) "Air Assault" is an epic war poem of the Vietnam Era dedicated to all air assault units of that war. It was originally written in honor of the Military Assistance Command Vietnam Studies and Observations Group (MACVSOG) Green Beret units. The poem was drafted in October, 1969 and finalized in October, 2002.