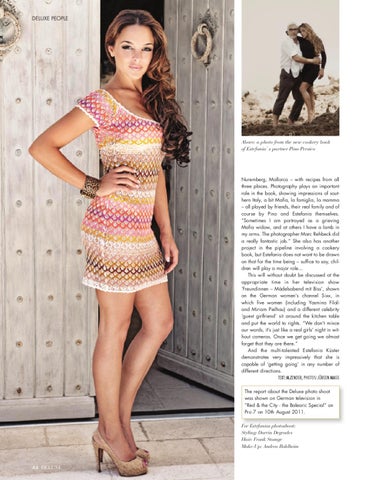 Above: a photo from the new cookery book of Estefania´s partner Pino Persico

Nuremberg, Mallorca – with recipes from all three places. Photography plays an important role in the book, showing impressions of southern Italy, a bit Mafia, la famiglia, la mamma – all played by friends, their real family and of course by Pino and Estefania themselves. “Sometimes I am portrayed as a grieving Mafia widow, and at others I have a lamb in my arms. The photographer Marc Rehbeck did a really fantastic job.” She also has another project in the pipeline involving a cookery book, but Estefania does not want to be drawn on that for the time being – suffice to say, children will play a major role... This will without doubt be discussed at the appropriate time in her television show ‘Freundinnen – Mädelsabend mit Biss’, shown on the German women’s channel Sixx, in which five women (including Yasmina Filali and Miriam Pielhau) and a different celebrity ‘guest girlfriend’ sit around the kitchen table and put the world to rights. “We don’t mince our words, it’s just like a real girls’ night in without cameras. Once we get going we almost forget that they are there.” And the multi-talented Estefania Küster demonstrates very impressively that she is capable of ‘getting going’ in any number of different directions. TEXT: M.ZEndEr, PhOTOS: JürgEn Magg The report about the Deluxe photo shoot was shown on German television in “Red &amp; the City - the Balearic Special” on Pro 7 on 10th August 2011. For Estefanias photoshoot: Styling: Darrin Degrades Hair: Frank Stamge Make-Up: Andrea Bohlheim 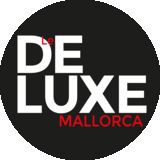