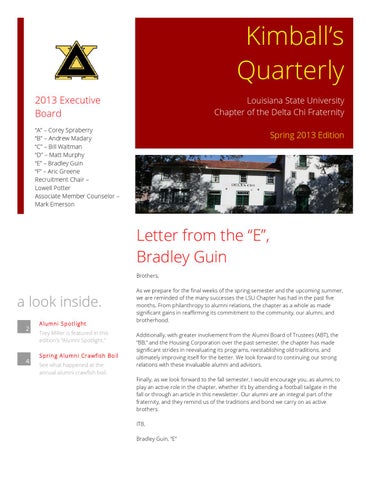 As we prepare for the final weeks of the spring semester and the upcoming summer, we are reminded of the many successes the LSU Chapter has had in the past five months. From philanthropy to alumni relations, the chapter as a whole as made significant gains in reaffirming its commitment to the community, our alumni, and brotherhood. Additionally, with greater involvement from the Alumni Board of Trustees (ABT), the “BB,” and the Housing Corporation over the past semester, the chapter has made significant strides in reevaluating its programs, reestablishing old traditions, and ultimately improving itself for the better. We look forward to continuing our strong relations with these invaluable alumni and advisors. Finally, as we look forward to the fall semester, I would encourage you, as alumni, to play an active role in the chapter, whether it’s by attending a football tailgate in the fall or through an article in this newsletter. Our alumni are an integral part of the fraternity, and they remind us of the traditions and bond we carry on as active brothers. ITB, Bradley Guin, “E”

Alumni Spotlight From academic achievement to professional successes, Delta Chi student members and alumni share their drive to succeed in all aspects of life. Have an accomplishment you want featured? Send it in to bguin2@tigers.lsu.edu.

Trey Miller joined Delta Chi as a sophomore in fall of 2007 as a member of Epsilon class. As an active member, he held the positions of Technology Chair, Scholarship Chair, Judicial Board, and Associate Member Counselor. He graduated in spring of 2010 with bachelor degrees in both Computer Science and Physics. After finishing school, Trey moved to Austin, Texas and went to work for Deloitte Consulting as a Business Technology Analyst. He began his career testing comprehensive court management software for the State of California. Once that project ended, Trey returned to Baton Rouge to help design the functional and technical components of case management software for the State of Louisiana’s eligibility programs.

As a traveling consultant for Deloitte, Trey’s love of travel grew into a minor obsession. In the two years after college he visited 33 cities in the United States and sampled cultures in 12 different countries. He resigned from Deloitte in August 2012 and embarked for three months on a solo backpacking trip through Australia, Fiji, and New Zealand. While in Spain, Trey met a man who would become his employer. In March of 2013 he moved to the Florida Keys to begin working in the destination marketing industry. If any brothers would like to contact Trey, he can be reached on his cell phone at (225) 975-0282 or by email at tmiller498@gmail.com.

Have an accomplishment you want featured? Send it in to bguin2@tigers.lsu.edu.

Pictured above left to right: Elizabeth Barry and Lee Janasek.

Admitted to the Doctor of Physical Therapy program at Bellarmine University in Louisville, Kentucky.

Gavin Larisey, son of Benjamin Larisey and grandson of Michael Larisey, was born on April 28, 2013.

Lowell Potter Elected to the Executive Board as Recruitment Chair.

From ACADEMIC ACHIEVEMENT to

PROFESSIONAL SUCCESSES, Delta Chi student members and alumni share their drive to succeed in all aspects of life. 3

Alumni Crawfish Boil: Recap Alum ni, activ es, and parents alike flocked to the alum ni crawfish boil sponsored b y the Alumni Board of Trustees earlier this month. As an annual tradition, the spring alumni crawfish boil aims to provide good food, music, and entertainment, all while strengthening alumni relations with the chapter. Coinciding with LSU football’s Spring Game, brothers past and new enjoyed crawfish cooked by the chapter “BB,” Calder Lynch, south of Tiger Stadium. The chapter would like to thank all alumni who were in attendance, and we look forward to hosting you in the fall for our Founders’ Day events.

“Kick it for Cancer Research” The LSU Chapter raised over $1,000 to support the V Foundation for Cancer Research in its spring philanthropy event. On March 3, 2013, the LSU Chapter hosted its spring philanthropy event on the grounds of the University Recreation (UREC) Center, “Kick it for Cancer Research.” Participating sororities participated in a kickball championship, followed by a brotherhood game. In doing so, we were able to raise over $1,000 to support The V Foundation for Cancer Research, Delta Chi’s official philanthropy. W hat is The V Fo undatio n? The V Foundation, named in honor of former basketball coach and cancer victim Jim Valvano, was chosen by Delta Chi because of its dedication to saving lives by helping to find a cure for cancer. Because The V Foundation sponsors research and treatments for all forms of cancer, a disease with which almost everyone has a personal connection, a personal relationship will be established with The V Foundation. From 1998 to 2006, Delta Chi chapters and colonies had contributed more than 223,000 man-hours to community service and have raised more than $1 million for charitable organizations. Its partnership with The V Foundation will allow Delta Chi to focus those efforts towards benefiting a single cause and organization. 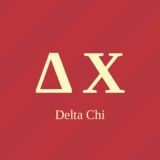