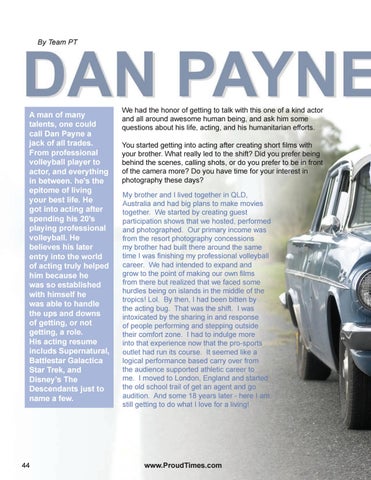 A man of many talents, one could call Dan Payne a jack of all trades. From professional volleyball player to actor, and everything in between. heâ&#x20AC;&#x2122;s the epitome of living your best life. He got into acting after spending his 20â&#x20AC;&#x2122;s playing professional volleyball. He believes his later entry into the world of acting truly helped him because he was so established with himself he was able to handle the ups and downs of getting, or not getting, a role. His acting resume includs Supernatural, Battlestar Galactica Star Trek, and Disneyâ&#x20AC;&#x2122;s The Descendants just to name a few.

We had the honor of getting to talk with this one of a kind actor and all around awesome human being, and ask him some questions about his life, acting, and his humanitarian efforts. You started getting into acting after creating short films with your brother. What really led to the shift? Did you prefer being behind the scenes, calling shots, or do you prefer to be in front of the camera more? Do you have time for your interest in photography these days? My brother and I lived together in QLD, Australia and had big plans to make movies together. We started by creating guest participation shows that we hosted, performed and photographed. Our primary income was from the resort photography concessions my brother had built there around the same time I was finishing my professional volleyball career. We had intended to expand and grow to the point of making our own films from there but realized that we faced some hurdles being on islands in the middle of the tropics! Lol. By then, I had been bitten by the acting bug. That was the shift. I was intoxicated by the sharing in and response of people performing and stepping outside their comfort zone. I had to indulge more into that experience now that the pro-sports outlet had run its course. It seemed like a logical performance based carry over from the audience supported athletic career to me. I moved to London, England and started the old school trail of get an agent and go audition. And some 18 years later - here I am still getting to do what I love for a living! We are so excited to bring you the August issue of Proud Times Magazine. This month we will continue our representation of the LGBTQ+ alphab...

We are so excited to bring you the August issue of Proud Times Magazine. This month we will continue our representation of the LGBTQ+ alphab...