Building Financial Institutions on the Fly 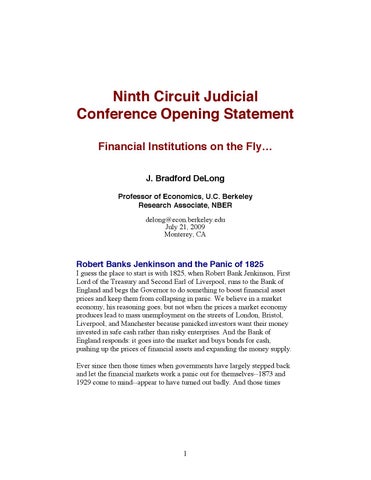 Robert Banks Jenkinson and the Panic of 1825 I guess the place to start is with 1825, when Robert Bank Jenkinson, First Lord of the Treasury and Second Earl of Liverpool, runs to the Bank of England and begs the Governor to do something to boost financial asset prices and keep them from collapsing in panic. We believe in a market economy, his reasoning goes, but not when the prices a market economy produces lead to mass unemployment on the streets of London, Bristol, Liverpool, and Manchester because panicked investors want their money invested in safe cash rather than risky enterprises. And the Bank of England responds: it goes into the market and buys bonds for cash, pushing up the prices of financial assets and expanding the money supply. Ever since then those times when governments have largely stepped back and let the financial markets work a panic out for themselves--1873 and 1929 come to mind--appear to have turned out badly. And those times

when the government has stepped in or has backed and deputized a private investment bank to support the market--1893 and 1907 come to mind, but also the Resolution Trust Corporation at the start of the 1990s and the U.S. Treasury&#39;s and IMF&#39;s interventions in support of Mexico in 1995 and of the East Asian economies in 1997-98--things appear to have gone less badly. At least, things appear to have gone sufficiently less badly that very few modern governments are willing to wash their hands and say the financial market should heal itself. That would be a radical step indeed.

The Obama Administration as Conservative The Obama administration is thus, in a sense, being conservative. It is following a tradition of policy in financial emergencies dating back to 1825 as it takes a number of steps to support the financial market--to try to boost demand for and the prices of risky financial assets in a whole number of ways ranging from deficit spending programs to boost the amount of government bonds outstanding and thus make private bonds in lower relative supply to guaranteeing risky private debt and recapitalizing banks to buying up auto companies. I understand what they are trying to do, and I am somewhat reluctant to second guess them: I know that Ben Bernanke, Tim Geithner, Larry Summers, Christie Romer, and company are all doing their absolute best, and I know that if I were in any of their shoes I would be making bigger mistakes than they are--different mistakes, probably, but bigger ones for sure.

Building Regulatory Institutions on the Fly But I do have questions and worries. They are triggered by how the U.S. government has gotten itself deeply, deeply involved in industrial and financial policy without constructing technocratic institutions like the 1930s RFC and the 1990s RTC that allowed earlier episodes of extraordinary government intervention into the guts of the industrial and financial structure of the economy to turn out relatively well. What we

have is not at all how James Madison or even Alexander Hamilton envisioned that things would work, with the executive having rather less discretionary power than George III of the House of Hanover, limited as the American executive was supposed to be by the constitution&#39;s definition of its mission as merely one of &quot;faithfully executing&quot; the laws passed by the legislative branch according to the lights of the judicial branch. So: •

Why didn&#39;t the congress follow the RFC/RTC model in authorizing Bush and Obama industrial and financial policy?

Why did the centrists in congress thus abandon so much of the power that they could exercise as The Most Dangerous Branch to shape the Treasury&#39;s and the Federal Reserve&#39;s response to this financial crisis?

And what, if any, assistance can be provided by what if any other governmental actors to try to improve our institutions on the fly as we fly, somewhat blindly, into the future?

Building Financial Institutions on the Fly

###Ninth Circuit Conference Opening Statement###So:* Why didn't the congress follow the RFC/RTC model in authorizing Bush and Obama industrial and financial policy? * Why did the centrists in congress thus abandon so much of the power that they could exercise as The Most Dangerous Branch to shape the Treasury's and the Federal Reserve's response to this financial crisis? * And what, if any, assistance can be provided by what if any other governmental actors to try to improve our institutions on the fly as we fly, somewhat blindly, into the future? 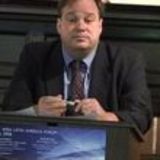