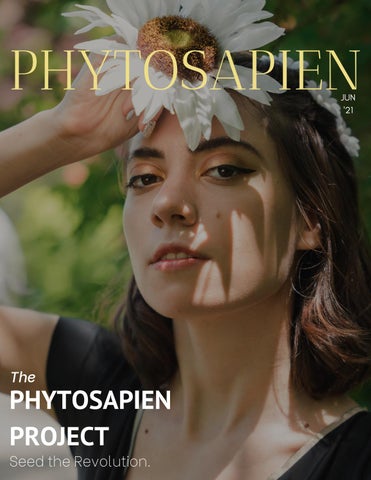 special thanks The Phytosapien Project has led me to MA in Design Products from the Royal College of Art. Nothing about my post graduate experience was how I expected it to be, including this project. When I was accepted to the RCA with a portfolio filled with cosplay, my family and friends asked if I would be making similar costume pieces in my MA. I laughed, and said, &quot;Well, I could make a ballgown, I suppose.&quot; Having spent 3/4 of my degree remote from NYC, I was forced to adapt to work without access to basic design resources. What I did have, always on my desk next to me, was my trusty Brother sewing machine. Sewing is a comfort and a love, and I am eager to convey my story and research through this medium. It may not be a ballgown, but the world seems to have a funny way of working. To my tutors who challenged my beliefs, to my parents who never batted an eye to my ever-winding path of interests , to my partner who never complained when I made a mess, and to everyone who believed in a girl who cosplayed, thank you.

An Interview with the Deesigner We spoke to the designer of The Phytosapien Project to understand her philosophy and insight behind the creation.

The Phytosapien Project is a critical take on human and non-human interspecies relationships. As a designer, I have challenged myself to design for non-human species while removing as much human bias as I can. I acknowledge my shortcomings here in that I am human and that is all I will ever be (save a brush with ego death). The human experience is all I know. And yet, I know humans are not the most “powerful” organisms on the planet and nor should we be the only living organisms with a say on how the world develops and matures. This is about more than just humans and plants, this is about an ecosystem under stress, dominated and domesticated.

&quot;I think therefore I am. &quot; A statement that haunts me as I think (ironic) about the intelligence of non-human species. Pouring over the teachings of Deleuze and Guattari, Darwin, Descartes, Haraway, Plumwood, Morton, and many more...I embrace that every living organism on this planet has a form of intelligence and sentience. Critics will often argue this claiming that what might be sentience/intelligence is just a series of complex biological reactions. I look at my hands and remember every time I touched a hot stove; what am I if not a complex series of biological reactions? If a tree pitches out as a bark beetle attempts to burrow, is that not the same? When Descartes made his declaration, surely he was referring to the emergent property of consciousness, not sentience. Meriam Webster dictionary defines sentience as the ability to perceive one’s environment and to experience pain and pleasure. These are properties that non-human organisms have undeniably exhibited. However considering the feelings of pain and pleasure to be universal experiences across species treads dangerously into the territory of anthropomorphizing and forcing the human experience onto others… -

There is no utility in anthropomorphizing another species. If it seems like it helps foster understanding, I assure you, the long engrained misconceptions that come come from humanizing non-human species do more harm than good. Perhaps we should phytomorphize instead, suggests ecologist Dr. Ian Baldwin, perhaps we should think more like a plant. No one can teach you how to phytomorphize, you simply learn through observation and dedication. Distilling human behavior to the purest biological mechanisms may be a productive first step, but productivity is not perfection.

With a frustrated laugh, Dr. Baldwin let me know that no matter how hard we try we can never truly phytomorphize because we are human. The

human bias has already polluted our knowledge to create a human-centric narrative for nonhuman life. Think about it, we even call our

I read an article recently from That’s Life Science

about how orchids lure their pollinators in and trick

them into eating fake pollen. The article villainized orchids calling them masters of deception,

pointedly saying they cheated their pollination

The stories of women and nature are closely related

partners. And yet, through this transaction affair, the

and ever intertwining, in historical depiction and in

orchid continue to reproduce and the pollinators get

nutrients from the pseudo-pollen. The story told

acknowledges this connection and the exploitation

here is reminiscent of the time old relationship

imposed by a male-dominated built society.

between women and men in the bedroom. Even if

The social and political systems that have

both parties might be satisfied, it is often the

domesticated and controlled women’s rights are,

seductress (the woman), the one who can bear

by no mistake, the same systems that exploit and

fruit, who has done wrong. I never would have

thought I&#39;d be reading an article slut-shaming a

flower. The mechanisms in which plants reproduce may be crafty and selfish, but what creation of life isn&#39;t a little selfish?

I&#39;ve long struggled with my role in a feminist narrative, and yet here I am standing proud next to my work. My act of defiance! A rebellion to the

All of these ideals weave together in The

to an Anthropocentric narrative, sexual liberation,

and to the individual. To you. Will you accept it? -

Construction and detail excerpts from The Phytosapien Project:

They&#39;ve had enough. It took them years to evolve and adapt, but plants are no strangers to crafting clever schemes to spread their influence. Engaging in guerilla warfare, the plants have began leaving traces of pollen on human clothing. These traces of pollen, undercover agents, hitch a ride and fall off in a new environment.

Something new sprouts up between the cracks of the pavement. It&#39;s green and leafy, like everything before. You step on it, ignoring its presence. But it won&#39;t die and over time it grows and grows and grows. It sprawls over the corner of the concrete such that you avoid it the next time you walk there.

ong before humans controlled the airs, the ground, the sea, it was plants. One thousands times more plant biomass exists on the earth than human, we are not in control. We write stories in fear of a technological uprising, where robots gain control of their sentience and fight to survive, fight to be recognized. Perhaps we should be more afraid of the organisms that have honed and commanded their intelligence for millenia.

As plants cross pollinate, they secure their bloodline and develop new species and create a new biodiversity. Other, weaker, plants die out. Some plants go into hiding where they create their own secluded communities to take shelter in.

When you were a kid, did you rip grass from the ground out of boredom? Did you enjoy tearing it into thin shards, exposing the stringy fibers running through each blade? When you were a little older, would you jump up and rip leaves off of trees as you passed

An onlooker, a human, looks at the vegetation and deems it &quot;ugly&quot; or even worse, harmful to their well being. But the plants won&#39;t stop growing, they don&#39;t care. They&#39;ve reclaimed the earth and the reign of humans is coming to a cacophonous close. Who were we to declare

by? What about bushes? How many flowers did you pluck petal by petal wondering if your love was never meant to be? How many lives did you take?

what had the right to grow before, who were we to make such baseless aesthetic choices? And the other non-organisms, they will live on. They are faster to adapt, they are faster to

Perhaps it was fear of the plant rebellion that we began to domesticate plants. First it started

create harmony with the natural world and live from the land, a skill humans have long since forgotten.

with a simple ceramic cage to constrict their roots, but our hubris knew no bounds. We began to genetically modify and selectively

And suddenly there is no where left to run. The ground is plants, and you are rooted. There is

breed plants to surpress their reproduction. We took away their rights -

The Phytosapien Project is a challenge to human and non-human interspecies relationships. Different touchstones of research and philosophical thought come together in this Project to create a critical narrative about a human’s role in the ecosystem. This is about more than just humans and plants, this is about an ecosystem under stress, dominated and domesticated.