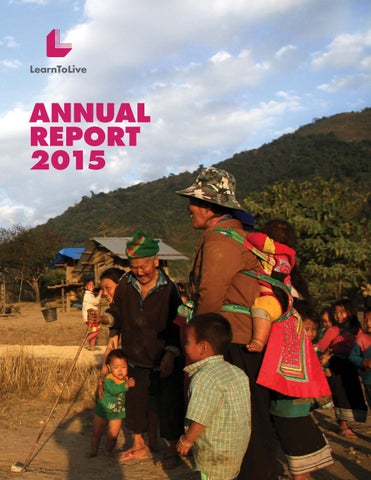 DIRECTORS LETTER For LearnToLive, 2015 was a year of consolidating existing relationships, reflecting on the trials and errors of our process thus far and forging new and exciting partnerships. Our new collaboration in South Africa with Woza Moya, an established NGO in the Ufafa Valley in KwaZula Natal, proved to be a tangible example of how LTL is now able to utilise our existing skill base to tailor a series of programs specifically geared to a region. We were able to facilitate an up-skill education program for their health care workers, while also teaching reproductive health in four schools and menstruation hygiene in the community. LTL learned a great deal in our first year in South Africa, while also feeling confident that we were well equipped to deliver meaningful and successful strategies and solutions. We intend for our partnership with Woza Moya to be ongoing and look forward to a fruitful partnership. Returning once again to Mok Mai in Laos continued to strengthen our ties with ADRA, as well as our collaboration with Dr. Marisa Vermeulen and Dr. Nicole Kaban. Our maternal child health and reproductive education program is one weâ&amp;#x20AC;&amp;#x2122;re incredibly proud of, and it was brilliant to return and build on our foundations in the community. We rolled out the LTLSCAN program to the local clinicians at the district hospital and the interactive sessions on Ultrasound practice were very successful. Donating an ultrasound machine to the hospital with ADRA was a real highlight of 2015 and weâ&amp;#x20AC;&amp;#x2122;re excited to return and track the progress of the program. 2015 was our fourth year in Indonesia and we are really beginning to hone our primary health care, early intervention and health education programs down to a science. Our Mental Health team made a great deal of headway, including presenting at the University of Jakarta about remote mental health issues in North Sulawesi. The student program ran incredibly smoothly, we went to more villages than ever, and our water design build on Bunaken was our most successful and streamlined water project to date.

The most important aspect of 2015 however was the opportunity to reflect on the notion of embracing failure in order to develop and grow. Often, the only way to create best practice in the field is through trial and error, and taking the time to consider our mistakes and learn from them has made LTL more professional and robust as an organisation. I would like to thank all of our donors, supporters and volunteers in 2015 who made such a successful year happen. LTL is looking forward to the future and it is both reassuring and exciting to have a group of dedicated and loyal supporters to help guide and inspire us along the way. Yanti

LearnToLive joins with communities worldwide to improve quality of life through healthcare, education, and access to clean water, while building global citizens and future leaders in healthcare.

In 2015, LTL began building the foundation for a collaborative effort with the local government and health department to reduce stigma around mental illness in Indonesia, as well as establish a much needed outpatient community mental health network.

Since 2012, LearnToLive’s Indonesian Health Initiative has provided primary health care, mental health and health education to thousands of people in the remote North Sulawesi region. In 2015, our team of doctors, nurses and students worked in seven communities and attended to more than 900 patients. Each year, LTL’s all-volunteer teams of health professionals from the U.S. and Australia travel to the Minahasen communities and conduct multi-day healthcare clinics. Additionally through the LTLIndonesia program, LTL aims to engage and inspire clinicians, both veteran and aspiring, to be active global health leaders, by providing a hands-on community health practice experience.

Also in 2015, the LTLWater team successfully constructed a rainwater collection and filtration system at the high school on Pulau Bunaken. The catchment system will provide clean potable water to the students of the school and their household members, an estimated 1,500 people.

adults were screened for psychological distress

patients were seen by a mental health clinician

Adequate access to clean drinking water is integral to the health and well-being of any community; without it, millions of people around the world suffer from high rates of preventable disease, hardship, and death. In conjunction with the build project, LTL delivered an interactive education session for the school’s students on the health benefits of hydration and filtered rainwater. Community members were also trained on how to operate and maintain the catchment system.

LAOS Laos is one of the poorest countries in the world, with a shockingly high infant mortality rate of 53.92 per 1000 live births. In response, LTL developed a partnership in 2014 with ADRA International, an NGO with an established community presence in Laos, with the goal of delivering maternal and child health programs to communities in the Xiangkhouang Province, an isolated and impoverished region just across the border from Vietnam in the northeast of Laos. In 2015, LTL delivered LTLSCAN, a skill building program for clinicians to expand their knowledge and application of clinical ultrasound. LTL worked with clinicians at the Mok Mai District Health Center to build their capacity on general ultrasound concepts, as well as specific applications for trauma and obstetric evaluations. The program included both instructional and hands-on components, and concluded with the donation of a portable ultrasound machine from LTL to the health center.

Also as part of the 2015 Laos program, LTL facilitated interactive reproductive health education sessions in four remote communities. Originally intended to target the adolescent populations of the villages, the health sessions wound up having broad appeal and engaging community members of all ages. The sessions covered basic reproductive anatomy, fertility, menstruation, conception, and prenatal care. Often more topics were discussed at the request of community members.

SOUTH AFRICA In 2015 LearnToLive piloted its first program in Africa, partnered with Woza Moya, a local NGO that has been working in Ufafa Valley of rural KwaZulu-Natal, South Africa for 15 years. The Ufafa Valley is a region hard-hit by the HIV epidemic with 78 percent of the adult population testing positive for HIV/AIDS, and South Africa itself ranking the second highest rate of HIV infection in the world. An LTL worked with Woza Moya staff to implement interactive reproductive health education sessions for high school students, as well as, educational sessions for local Community Care Workers on the topics of HIV treatment compliance, diabetes, TB and nutrition. LTL clinical volunteers also provided wellness checks for 430 children and “Gogos” (“grandmas” who serve as the primary caretakers for children orphaned by the HIV epidemic).

Using Days for Girls packs as a model, LTL also led a hands-on workshop to teach the Gogos how to make reusable menstruation hygiene kits.