Research Nuggets: "Turn the Downside of Our Weekly Engagement Curve into Results" 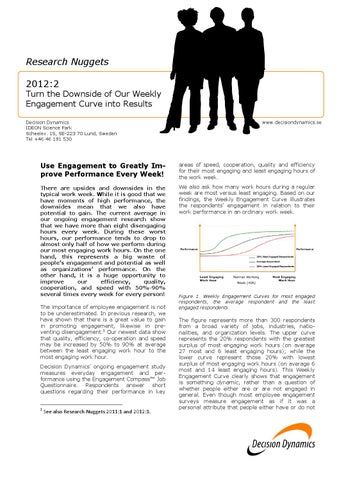 Use Engagement to Greatly Improve Performance Every Week!

areas of speed, cooperation, quality and efficiency for their most engaging and least engaging hours of the work week.

There are upsides and downsides in the typical work week. While it is good that we have moments of high performance, the downsides mean that we also have potential to gain. The current average in our ongoing engagement research show that we have more than eight disengaging hours every week. During these worst hours, our performance tends to drop to almost only half of how we perform during our most engaging work hours. On the one hand, this represents a big waste of people’s engagement and potential as well as organizations’ performance. On the other hand, it is a huge opportunity to improve our efficiency, quality, cooperation, and speed with 50%-90% several times every week for every person!

We also ask how many work hours during a regular week are most versus least engaging. Based on our findings, the Weekly Engagement Curve illustrates the respondents’ engagement in relation to their work performance in an ordinary work week.

The importance of employee engagement is not to be underestimated. In previous research, we have shown that there is a great value to gain in promoting engagement, likewise in preventing disengagement.1 Our newest data show that quality, efficiency, co-operation and speed may be increased by 50% to 90% at average between the least engaging work hour to the most engaging work hour. Decision Dynamics’ ongoing engagement study measures everyday engagement and performance using the Engagement Compass™ Job Questionnaire. Respondents answer short questions regarding their performance in key

2012:2 Turn the Downside of Our Weekly Engagement Curve into Results

have, our research highlights that all respondents display broad ranges of more or less engaged behavior. It would be a terrible waste to write off the people with the least engaged work hours as not having any engagement. They still perform almost as well as the most engaged during their 6 most engaged hours. Furthermore, the strongest explanation that we have found so far for them not having as many highly engaging hours is that their job tasks do not allow them to use more than 45% of their potential overall during a normal week. As an interesting contrast, the 20% with the greatest surplus of most engaging hours have job tasks that allow them to use 72% of their potential on a weekly basis. At the same time, this group still spends on average six hours where they use less than half of their potential than they use during their most engaging hours.

Figure 2. The Weekly Engagement Curve for the average respondent, with arrow highlighting the great performance improvement from least to most engaging work hour.

Thus, the key conclusion is that almost everybody are likely to have great performance improvement potential from starting to exchange one or more of their least engaging work hours for more of their most engaging hours. This is shown by the arrow in Figure 2, where the average improvements of efficiency is 86%, quality 60%, cooperation 56% and speed 56% for most people almost every week!

Here is what you can do: 1. Identify several of your own and others’ engagement killers and drivers in your everyday work While some are likely to be harder to exchange, others will be easier to get the improvements started. 2. Be open minded and creative about how such engaging exchanges can be achieved Certain tasks can, for instance, be done by others or done in different, less disengaging ways or done less, even not at all, to better utilize the potential strengths of people. 3. Create many small engaging everyday co-wins for individuals and the organization Each improvement can add to a positive momentum of each person’s engagement “flywheel” rather than being stuck in everyday ups &amp; downs.

Research Nuggets: "Turn the Downside of Our Weekly Engagement Curve into Results"