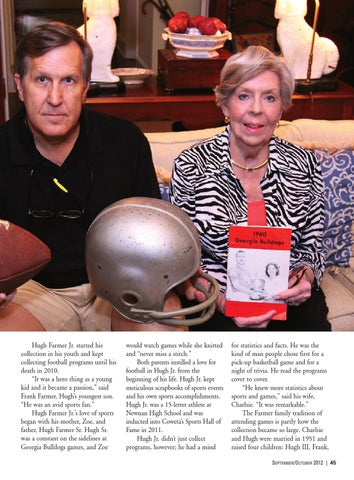 Hugh Farmer Jr. started his collection in his youth and kept collecting football programs until his death in 2010. “It was a hero thing as a young kid and it became a passion,” said Frank Farmer, Hugh’s youngest son. “He was an avid sports fan.” Hugh Farmer Jr.’s love of sports began with his mother, Zoe, and father, Hugh Farmer Sr. Hugh Sr. was a constant on the sidelines at Georgia Bulldogs games, and Zoe

would watch games while she knitted and “never miss a stitch.” Both parents instilled a love for football in Hugh Jr. from the beginning of his life. Hugh Jr. kept meticulous scrapbooks of sports events and his own sports accomplishments. Hugh Jr. was a 15-letter athlete at Newnan High School and was inducted into Coweta’s Sports Hall of Fame in 2011. Hugh Jr. didn’t just collect programs, however; he had a mind

for statistics and facts. He was the kind of man people chose first for a pick-up basketball game and for a night of trivia. He read the programs cover to cover. “He knew more statistics about sports and games,” said his wife, Charlsie. “It was remarkable.” The Farmer family tradition of attending games is partly how the collection became so large. Charlsie and Hugh were married in 1951 and raised four children: Hugh III, Frank, SEPTEMBER/OCTOBER 2012 | 45 The theme is "Celebrate Fall" and in this issue the annual Coweta County Fair is highlighted. Other fall themes include football, a flower f...

The theme is "Celebrate Fall" and in this issue the annual Coweta County Fair is highlighted. Other fall themes include football, a flower f...