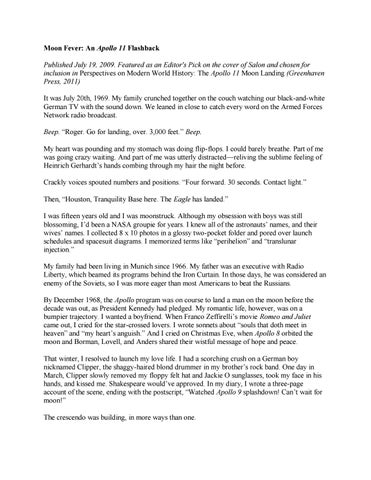 Moon Fever: An Apollo 11 Flashback Published July 19, 2009. Featured as an Editor&#39;s Pick on the cover of Salon and chosen for inclusion in Perspectives on Modern World History: The Apollo 11 Moon Landing (Greenhaven Press, 2011) It was July 20th, 1969. My family crunched together on the couch watching our black-and-white German TV with the sound down. We leaned in close to catch every word on the Armed Forces Network radio broadcast. Beep. “Roger. Go for landing, over. 3,000 feet.” Beep. My heart was pounding and my stomach was doing flip-flops. I could barely breathe. Part of me was going crazy waiting. And part of me was utterly distracted—reliving the sublime feeling of Heinrich Gerhardt’s hands combing through my hair the night before. Crackly voices spouted numbers and positions. “Four forward. 30 seconds. Contact light.” Then, “Houston, Tranquility Base here. The Eagle has landed.” I was fifteen years old and I was moonstruck. Although my obsession with boys was still blossoming, I’d been a NASA groupie for years. I knew all of the astronauts’ names, and their wives’ names. I collected 8 x 10 photos in a glossy two-pocket folder and pored over launch schedules and spacesuit diagrams. I memorized terms like “perihelion” and “translunar injection.” My family had been living in Munich since 1966. My father was an executive with Radio Liberty, which beamed its programs behind the Iron Curtain. In those days, he was considered an enemy of the Soviets, so I was more eager than most Americans to beat the Russians. By December 1968, the Apollo program was on course to land a man on the moon before the decade was out, as President Kennedy had pledged. My romantic life, however, was on a bumpier trajectory. I wanted a boyfriend. When Franco Zeffirelli’s movie Romeo and Juliet came out, I cried for the star-crossed lovers. I wrote sonnets about “souls that doth meet in heaven” and “my heart’s anguish.” And I cried on Christmas Eve, when Apollo 8 orbited the moon and Borman, Lovell, and Anders shared their wistful message of hope and peace. That winter, I resolved to launch my love life. I had a scorching crush on a German boy nicknamed Clipper, the shaggy-haired blond drummer in my brother’s rock band. One day in March, Clipper slowly removed my floppy felt hat and Jackie O sunglasses, took my face in his hands, and kissed me. Shakespeare would’ve approved. In my diary, I wrote a three-page account of the scene, ending with the postscript, “Watched Apollo 9 splashdown! Can’t wait for moon!” The crescendo was building, in more ways than one.

In May, Apollo 10’s lunar module, Snoopy, rehearsed maneuvers just ten miles above the moon’s surface while the command ship, Charlie Brown, flew solo. I cheered but, sadly, my own maneuvers with Clipper had failed and I was unattached once more. Over the lazy June days after school was out, my best friend, Elaine, and I biked along the Isar River, chattering about boys and life and love, wondering about our future. Together, we counted the days until Apollo 11. Armstrong, Aldrin, and Collins blasted off on July 16th. Three days later, around the time they entered the moon’s gravitational field, Heinrich Gerhardt was driving me home in his green Citroën. Heinrich had long black hair and big teeth. He was no Romeo, but he was nineteen and funny and he liked me. We kissed, and kissed, goodnight. When he dropped me off, I hoped my parents didn’t notice my rumpled hair and flushed cheeks. The next night, the Eagle landed. It would take the astronauts a few hours to prepare for descent, so I went upstairs and napped. Dad woke me up to watch Armstrong climb down the ladder at 3:56 a.m. Man was on the moon! The images were clear, but I don’t remember what we said. I just knew the world had changed. It felt like everything was changing—new, irresistible forces of nature and gravity and history were beckoning me into their arms. I tried to fall back asleep but couldn’t. My thoughts roared like waves, one over the other, remembering the moonwalk and Neil and Buzz and the flag and one giant leap for mankind. And Heinrich. Around noon, I called Elaine. “I’ve got moon fever!” I said. “Me too!” she answered. I hopped on my bike and pedaled to the neighborhood park. We rode around and around in circles, giddy as little girls, shouting, “Prepare for trans-sidewalk injection!” and “We have liftoff!” When we got tired, we lay down on the soft grass, looked up at the sky, and talked about sex and Apollo and sex. We were fifteen. Nothing else mattered.