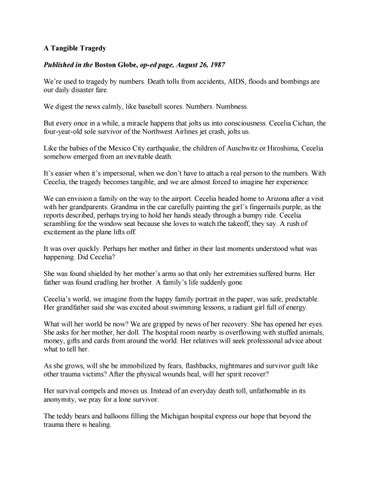 A Tangible Tragedy Published in the Boston Globe, op-ed page, August 26, 1987 We’re used to tragedy by numbers. Death tolls from accidents, AIDS, floods and bombings are our daily disaster fare. We digest the news calmly, like baseball scores. Numbers. Numbness. But every once in a while, a miracle happens that jolts us into consciousness. Cecelia Cichan, the four-year-old sole survivor of the Northwest Airlines jet crash, jolts us. Like the babies of the Mexico City earthquake, the children of Auschwitz or Hiroshima, Cecelia somehow emerged from an inevitable death. It’s easier when it’s impersonal, when we don’t have to attach a real person to the numbers. With Cecelia, the tragedy becomes tangible, and we are almost forced to imagine her experience. We can envision a family on the way to the airport. Cecelia headed home to Arizona after a visit with her grandparents. Grandma in the car carefully painting the girl’s fingernails purple, as the reports described, perhaps trying to hold her hands steady through a bumpy ride. Cecelia scrambling for the window seat because she loves to watch the takeoff, they say. A rush of excitement as the plane lifts off. It was over quickly. Perhaps her mother and father in their last moments understood what was happening. Did Cecelia? She was found shielded by her mother’s arms so that only her extremities suffered burns. Her father was found cradling her brother. A family’s life suddenly gone. Cecelia’s world, we imagine from the happy family portrait in the paper, was safe, predictable. Her grandfather said she was excited about swimming lessons, a radiant girl full of energy. What will her world be now? We are gripped by news of her recovery. She has opened her eyes. She asks for her mother, her doll. The hospital room nearby is overflowing with stuffed animals, money, gifts and cards from around the world. Her relatives will seek professional advice about what to tell her. As she grows, will she be immobilized by fears, flashbacks, nightmares and survivor guilt like other trauma victims? After the physical wounds heal, will her spirit recover? Her survival compels and moves us. Instead of an everyday death toll, unfathomable in its anonymity, we pray for a lone survivor. The teddy bears and balloons filling the Michigan hospital express our hope that beyond the trauma there is healing.