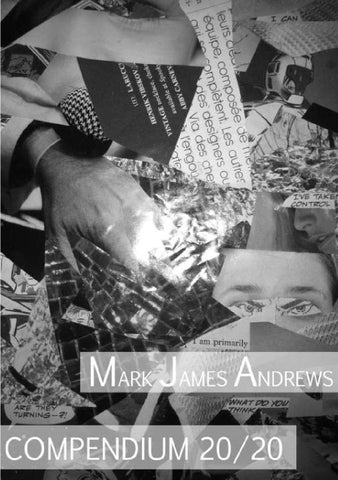 Mimeo Revolution noting Underground. Wordslingers groping for Peace. E. Sanders Head Mother Fug in Charge chanting the litany OUT, DEMONS, OUT! Mass Exorcism / Exorgasm levitating the Pentagon with Norman Mâ&#x20AC;&#x2122;s Armies of the Night charging, chugging out of the flatbed of a Rusty Truck sporting a generator & primitive sound system driven by Trout Fishing in America playing a ukulele in Jack the Ripperâ&#x20AC;&#x2122;s Clothes.

Jerzy K.â&#x20AC;&#x2122;s Chauncey trumps Corporate & The Prez simply by Being There. Poor scabrous Buk[owski] schedules Chinaski to sub postal stuffing utility bills thru the slots of murdered time cornered by a German Shepherd dog snout halfway up his poop chute as the streets are full of insane & dull Rabbits (Redux) living with John Updike in nice houses & they didnâ&#x20AC;&#x2122;t seem to work. You wondered how they did it. Certainly not under the influence of Hunter (Fear and Loathing sky filling w/HUGE BATS). At least Neruda copped The Nobel.

This is just to say I have swallowed all the pills that were in your red purse and which you were rationing, saving for your work week. Forgive me for getting loaded. I knew they werenâ&#x20AC;&#x2122;t M & Mâ&#x20AC;&#x2122;s.

Grifters melting into mystique at the The Graduateâ&#x20AC;&#x2122;s party. A triple cross Oedipal love triangle confidence take down. But a dweeb was going to score more pussy than he could handle, straight malchick lubbilubbing just like Clockwork, as R. Frost went cardio poolside running amok in a wolf suit playing (Hopscotch) Where the Wild Things

Red bulbous nose eased his paunch into his writing desk before a door wall open to the night. A full breast brushed his cheek as his flute of Cabernet was placed to his left. She turned on the stereo to Mahlerâ&#x20AC;&#x2122;s 9th Symphony and faded away. Moonbeams and a warm breeze came in from San Pedro harbor as he toyed with words, a story of his hard scrabble hangover mornings working the line at a St. Louis dog biscuit factory.

Papa gray beard with the Roman senator comb-over gamboled over to the whirling propeller after a smooth landing and was quickly tackled by the keepers of the flame. He knew he had raised his last flag up the pole. Pills and electroshock were so blasĂŠ. He rose up with a tight grin and dusted off his pants ready for the ride to Ketchum. At his new Idaho home was his favorite Boss 12 Gauge waiting to be cleaned.

Hardboiling in Harlem: Coffin Ed Johnson & Gravedigger Jones pissed off with all the red tape & ass kicking take Breakfast at Tiffanyâ&#x20AC;&#x2122;s uptown. Upper East Side. American Geisha. 3-Way with Holly Golightly. Cigarette holder & all the accoutrements. You can leave your hat on. Saturday Night and Sunday Morning. Weeping. You canâ&#x20AC;&#x2122;t give your heart to a wild thing.

Reading. Ryunosuke Akutagawa in the clammy air at Lost Lake. Kappa father puts his mouth to the vagina of mother Kappa. Womb as cell phone to blue tooth foetus poses the question: â&#x20AC;&#x153;Do you wish to be born?â&#x20AC;? Existence On-Demand. Birth and Death blown out of the waters of time into infinity, choice, and possibility.

A number of the pieces in Compendium 20/20 first appeared in Short, Fast, & Deadly. Some others appeared in formalist disguise in Asphodel Madness 2.0, Clutching at Straws, Deuce Coupe, Electric Windmill, Gutter Eloquence, Literary Burlesque, Rusty Truck, Red Fez and The Legendary.

About the Author Mark James Andrews lives and writes one mile outside the city limits of Detroit and has previously gone chapbooking with Punkpomes pleeze (Jesusâ&#x20AC;&#x2122; Home Run Press) and Burning Trash (Pudding House). 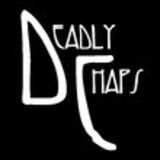