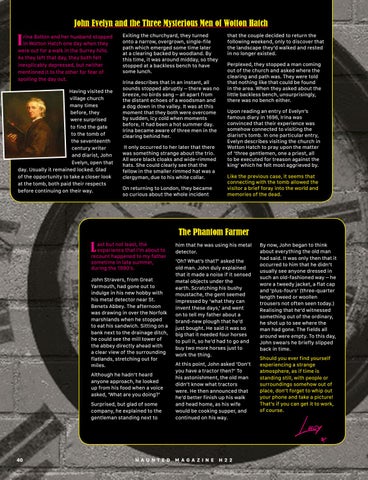 John Evelyn and the Three Mysterious Men of Wotton Hatch

rina Bolton and her husband stopped in Wotton Hatch one day when they were out for a walk in the Surrey hills. As they left that day, they both felt inexplicably depressed, but neither mentioned it to the other for fear of spoiling the day out. Having visited the village church many times before, they were surprised to find the gate to the tomb of the seventeenth century writer and diarist, John Evelyn, open that day. Usually it remained locked. Glad of the opportunity to take a closer look at the tomb, both paid their respects before continuing on their way.

Exiting the churchyard, they turned onto a narrow, overgrown, single-file path which emerged some time later at a clearing backed by woodland. By this time, it was around midday, so they stopped at a backless bench to have some lunch.

that the couple decided to return the following weekend, only to discover that the landscape they’d walked and rested in no longer existed.

Irina describes that in an instant, all sounds stopped abruptly – there was no breeze, no birds sang – all apart from the distant echoes of a woodsman and a dog down in the valley. It was at this moment that they both were overcome by sudden, icy cold when moments before, it had been a hot summer day. Irina became aware of three men in the clearing behind her. It only occurred to her later that there was something strange about the trio. All wore black cloaks and wide-rimmed hats. She could clearly see that the fellow in the smaller rimmed hat was a clergyman, due to his white collar. On returning to London, they became so curious about the whole incident

Perplexed, they stopped a man coming out of the church and asked where the clearing and path was. They were told that nothing like that could be found in the area. When they asked about the little backless bench, unsurprisingly, there was no bench either. Upon reading an entry of Evelyn’s famous diary in 1696, Irina was convinced that their experience was somehow connected to visiting the diarist’s tomb. In one particular entry, Evelyn describes visiting the church in Wotton Hatch to pray upon the matter of ‘three gentlemen, one a priest, all to be executed for treason against the king’ which he felt most aggrieved by. Like the previous case, it seems that connecting with the tomb allowed the visitor a brief foray into the world and memories of the dead.

The Phantom Farmer ast but not least, the experience that I’m about to Lrecount happened to my father sometime in late summer, during the 1990’s.

John Stravers, from Great Yarmouth, had gone out to indulge in his new hobby with his metal detector near St. Benets Abbey. The afternoon was drawing in over the Norfolk marshlands when he stopped to eat his sandwich. Sitting on a bank next to the drainage ditch, he could see the mill tower of the abbey directly ahead with a clear view of the surrounding flatlands, stretching out for miles. Although he hadn’t heard anyone approach, he looked up from his food when a voice asked, ‘What are you doing?’ Surprised, but glad of some company, he explained to the gentleman standing next to

him that he was using his metal detector. ‘Oh? What’s that?’ asked the old man. John duly explained that it made a noise if it sensed metal objects under the earth. Scratching his bushy moustache, the gent seemed impressed by ‘what they can invent these days,’ and went on to tell my father about a brand-new plough that he’d just bought. He said it was so big that it needed four horses to pull it, so he’d had to go and buy two more horses just to work the thing. At this point, John asked ‘Don’t you have a tractor then?’ To his astonishment, the old man didn’t know what tractors were. He then announced that he’d better finish up his walk and head home, as his wife would be cooking supper, and continued on his way.

By now, John began to think about everything the old man had said. It was only then that it occurred to him that he didn’t usually see anyone dressed in such an old-fashioned way – he wore a tweedy jacket, a flat cap and ‘plus-fours’ (three-quarter length tweed or woollen trousers not often seen today.) Realising that he’d witnessed something out of the ordinary, he shot up to see where the man had gone. The fields all around were empty. To this day, John swears he briefly slipped back in time. Should you ever find yourself experiencing a strange atmosphere, as if time is standing still, with people or surroundings somehow out of place, don’t forget to whip out your phone and take a picture! That’s if you can get it to work, of course. 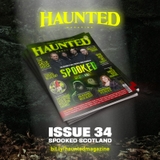 Haunted Magazine Issue 22: Photographs From the Edge of Hell

This issue is packed full of the usual things you expect from Haunted Magazine but is probably the darkest that we've made. Our excellent wr...

Haunted Magazine Issue 22: Photographs From the Edge of Hell

This issue is packed full of the usual things you expect from Haunted Magazine but is probably the darkest that we've made. Our excellent wr...