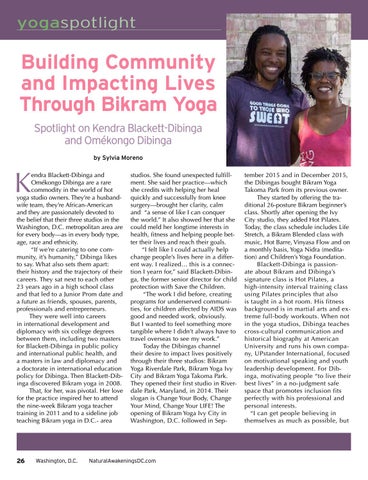 endra Blackett-Dibinga and Omékongo Dibinga are a rare commodity in the world of hot yoga studio owners. They’re a husbandwife team, they’re African-American and they are passionately devoted to the belief that their three studios in the Washington, D.C. metropolitan area are for every body—as in every body type, age, race and ethnicity. “If we’re catering to one community, it’s humanity,” Dibinga likes to say. What also sets them apart: their history and the trajectory of their careers. They sat next to each other 23 years ago in a high school class and that led to a Junior Prom date and a future as friends, spouses, parents, professionals and entrepreneurs. They were well into careers in international development and diplomacy with six college degrees between them, including two masters for Blackett-Dibinga in public policy and international public health, and a masters in law and diplomacy and a doctorate in international education policy for Dibinga. Then Blackett-Dibinga discovered Bikram yoga in 2008. That, for her, was pivotal. Her love for the practice inspired her to attend the nine-week Bikram yoga teacher training in 2011 and to a sideline job teaching Bikram yoga in D.C.- area

studios. She found unexpected fulfillment. She said her practice­—which she credits with helping her heal quickly and successfully from knee surgery—brought her clarity, calm and “a sense of like I can conquer the world.” It also showed her that she could meld her longtime interests in health, fitness and helping people better their lives and reach their goals.    “I felt like I could actually help change people’s lives here in a different way. I realized… this is a connection I yearn for,” said Blackett-Dibinga, the former senior director for child protection with Save the Children. “The work I did before, creating programs for underserved communities, for children affected by AIDS was good and needed work, obviously. But I wanted to feel something more tangible where I didn’t always have to travel overseas to see my work.” Today the Dibingas channel their desire to impact lives positively through their three studios: Bikram Yoga Riverdale Park, Bikram Yoga Ivy City and Bikram Yoga Takoma Park. They opened their first studio in Riverdale Park, Maryland, in 2014. Their slogan is Change Your Body, Change Your Mind, Change Your LIFE! The opening of Bikram Yoga Ivy City in Washington, D.C. followed in Sep-

tember 2015 and in December 2015, the Dibingas bought Bikram Yoga Takoma Park from its previous owner. They started by offering the traditional 26-posture Bikram beginner’s class. Shortly after opening the Ivy City studio, they added Hot Pilates. Today, the class schedule includes Life Stretch, a Bikram Blended class with music, Hot Barre, Vinyasa Flow and on a monthly basis, Yoga Nidra (meditation) and Children’s Yoga Foundation. Blackett-Dibinga is passionate about Bikram and Dibinga’s signature class is Hot Pilates, a high-intensity interval training class using Pilates principles that also is taught in a hot room. His fitness background is in martial arts and extreme full-body workouts. When not in the yoga studios, Dibinga teaches cross-cultural communication and historical biography at American University and runs his own company, UPstander International, focused on motivational speaking and youth leadership development. For Dibinga, motivating people “to live their best lives” in a no-judgment safe space that promotes inclusion fits perfectly with his professional and personal interests. “I can get people believing in themselves as much as possible, but