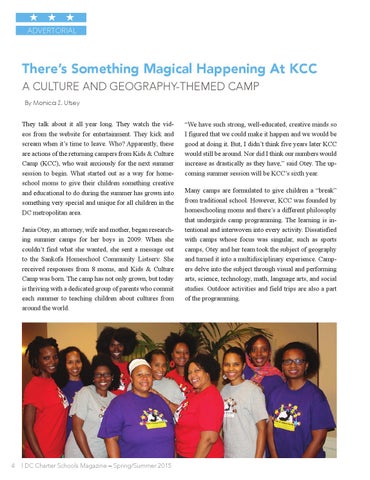 There’s Something Magical Happening At KCC A CULTURE AND GEOGRAPHY-THEMED CAMP By Monica Z. Utsey

They talk about it all year long. They watch the videos from the website for entertainment. They kick and scream when it’s time to leave. Who? Apparently, these are actions of the returning campers from Kids & Culture Camp (KCC), who wait anxiously for the next summer session to begin. What started out as a way for homeschool moms to give their children something creative and educational to do during the summer has grown into something very special and unique for all children in the DC metropolitan area. Jania Otey, an attorney, wife and mother, began researching summer camps for her boys in 2009. When she couldn’t find what she wanted, she sent a message out to the Sankofa Homeschool Community Listserv. She received responses from 8 moms, and Kids & Culture Camp was born. The camp has not only grown, but today is thriving with a dedicated group of parents who commit each summer to teaching children about cultures from around the world.

“We have such strong, well-educated, creative minds so I figured that we could make it happen and we would be good at doing it. But, I didn’t think five years later KCC would still be around. Nor did I think our numbers would increase as drastically as they have,” said Otey. The upcoming summer session will be KCC’s sixth year. Many camps are formulated to give children a “break” from traditional school. However, KCC was founded by homeschooling moms and there’s a different philosophy that undergirds camp programming. The learning is intentional and interwoven into every activity. Dissatisfied with camps whose focus was singular, such as sports camps, Otey and her team took the subject of geography and turned it into a multidisciplinary experience. Campers delve into the subject through visual and performing arts, science, technology, math, language arts, and social studies. Outdoor activities and field trips are also a part of the programming. The core objective of DC Charter Schools Magazine is to provide its readers with a wealth of information about charter schools in Washington...

The core objective of DC Charter Schools Magazine is to provide its readers with a wealth of information about charter schools in Washington...