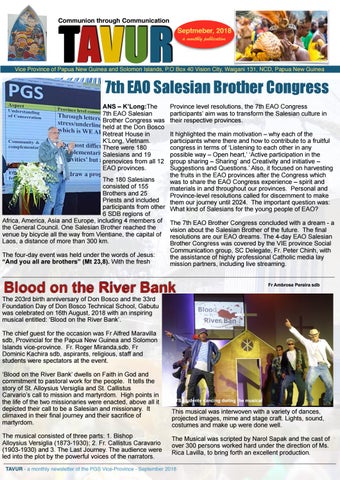 Province level resolutions, the 7th EAO Congress participants’ aim was to transform the Salesian culture in their respective provinces.

It highlighted the main motivation – why each of the participants where there and how to contribute to a fruitful congress in terms of ‘Listening to each other in any possible way – Open heart,’ ‘Active participation in the group sharing – Sharing’ and Creativity and initiative – Suggestions and Questions.’ Also, it focused on harvesting the fruits in the EAO provinces after the Congress which The 180 Salesians was to share the EAO Congress experience – spirit and consisted of 155 materials in and throughout our provinces. Personal and Brothers and 25 Province-level resolutions called for discernment to make Priests and included them our journey until 2024. The important question was: participants from other What kind of Salesians for the young people of EAO? 6 SDB regions of Africa, America, Asia and Europe, including 4 members of The 7th EAO Brother Congress concluded with a dream - a the General Council. One Salesian Brother reached the vision about the Salesian Brother of the future. The final venue by bicycle all the way from Vientiane, the capital of resolutions are our EAO dreams. The 4-day EAO Salesian Laos, a distance of more than 300 km. Brother Congress was covered by the VIE province Social Communication group, SC Delegate, Fr. Peter Chinh, with The four-day event was held under the words of Jesus: the assistance of highly professional Catholic media lay “And you all are brothers” (Mt 23,8). With the fresh mission partners, including live streaming.

Blood on the River Bank

The 203rd birth anniversary of Don Bosco and the 33rd Foundation Day of Don Bosco Technical School, Gabutu was celebrated on 16th August, 2018 with an inspiring musical entitled: ‘Blood on the River Bank’. The chief guest for the occasion was Fr Alfred Maravilla sdb, Provincial for the Papua New Guinea and Solomon Islands vice-province. Fr. Roger Miranda,sdb, Fr Dominic Kachira sdb, aspirants, religious, staff and students were spectators at the event.

‘Blood on the River Bank’ dwells on Faith in God and commitment to pastoral work for the people. It tells the story of St. Alloysius Versiglia and St. Callistus Carvario’s call to mission and martyrdom. High points in the life of the two missionaries were enacted, above all it depicted their call to be a Salesian and missionary. It climaxed in their final journey and their sacrifice of martyrdom. The musical consisted of three parts: 1. Bishop Alloysius Versiglia (1873-1930); 2. Fr. Callistus Caravario (1903-1930) and 3. The Last Journey. The audience were led into the plot by the powerful voices of the narrators.

DBTS students dancing during the musical

This musical was interwoven with a variety of dances, projected images, mime and stage craft. Lights, sound, costumes and make up were done well. The Musical was scripted by Narol Sapak and the cast of over 300 persons worked hard under the direction of Ms. Rica Lavilla, to bring forth an excellent production.

TAVUR - a monthly newsletter of the PGS Vice-Province - September 2018

Film festival highlights Life and Love Port Moresby: The Second International Short Film Festival (ISFF18) was held on 4th August, 2018 at the Paradise Cinema, Vision City, Port Moresby. Hosted by the Catholic Bishops Conference of Papua New Guinea and Solomon Islands, the festival was part of the Media Education Seminars held for selected students of seven schools. The theme for the festival was: Youth Alive, Celebrating Life and Love. 250 people young and old, participated in an emotional and reflective event.

At the start of the screening, the Archbishop invited all to use the media responsibly. “The media is used to inform, educate and entertain its audience. We need to use this vital tool to spread the ‘Good News”, he encouraged the audience. The variety of films from different countries highlighted the theme of the Synod for young people: ‘Young people, Faith and Vocational Discernment’; Year of Youth: ‘Called to the fullness of Life and Love’ and the World Communications Day theme: ‘The truth will set you Free, Fake News and Journalism for Peace’. The best inspirational film, ’My Little Story’ by Jeffrey Katusele highlighted the zeal, dedication and commitment of Archbishop Francisco Panfilo sdb. Many were moved to tears.

Representatives from the schools highlighted the importance of the media and how best they could use it to His Excellency, Apostolic Nuncio, Archbishop Kurian share and communicate an inspirational message. The Matthew Vayalunkal was the chief guest at the event. Fr earlier seminars dwelt on: Image, Print, Audio and Video. Klement Vaclav sdb, Regional for East Asia Oceania, Fr The seven schools who participated in the event were: Alfred Maravilla sdb, Provincial, Principals and Jubilee Catholic Secondary School, Hohola; Sacred Heart representatives from the Australian High Commission were Teachers College, Bomana; Don Bosco Technological special guests at the event. The event also saw priests, Institute, Boroko; Don Bosco Technical School, Gabutu; religious, laity, parents and students from different schools Marianville Secondary School, Bomana; Limana Vocational of the city participate in the event. School, Gordons and Caritas Technical School, Boroko.

At DBTI, a biannual cultural show is celebrated. Given the opportunity to participate in their cultural show, the students put their heart into the preparation of the different The theme of the Cultural show was, “Harim Tok – dances. The Cultural show concluded its celebrations of Wokabaut Wantaim” which is the pidgin translation of the the Don Bosco week from the 11th – 18th August 2018. The Strenna, “… Let us cultivate the art of listening and celebrations commenced with the Family Day on the 11th accompaniment”. The Cultural show commenced with a August, which was well attended by the families, parents, prayer by Br Reto Wanner SDB. guardians and friends. On the 13th and 14th August was the Sports fest while on the 15th August was the ‘Open The singing of the National Anthem and the recital of the National Pledge led by a student, Mr. Basil Iwik. Fr. Alfred House and Skills competition’ in all the seven technologies. On the 16th was a variety of activities such Maravilla SDB, Provincial of the Salesians of the viceprovince of Papua New Guinea and Solomon Islands as the: ‘Launch of the DBTI website, fashion show, and (PGS), who is the chairperson of the Governing Board of Bosco got talent, etc.’ On the 17th August, the students DBTI welcomed everyone and opened the show. had time to prepare for the cultural show during the day and in the evening was the homecoming of the past pupils. There were 20 provincial singsing groups who performed. The students represented the four regions, Southern, During the entire week of activities and celebrations, the Momase, Highlands and the New Guinea Islands and the students displayed and reflected the spirit of the theme as 21 provinces of Papua New Guinea. The students their teams performed and worked together to achieve the prepared very well for the dances and proudly displayed targets set. their cultures.

a monthly PGS publication Communion through Communication a monthly publication, in the footsteps of Cagliero

Send your news items to: ambrose.pereirasdb@gmail.com on or before the 24th of the month TAVUR - a monthly newsletter of the PGS Vice-Province - September 2018 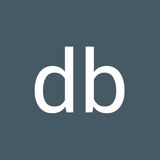