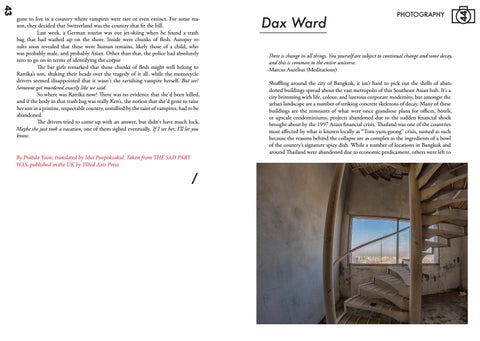 By Prabda Yoon, translated by Mui Poopoksakul. Taken from THE SAD PART WAS, published in the UK by Tilted Axis Press

There is change in all things. You yourself are subject to continual change and some decay, and this is common to the entire universe. -Marcus Aurelius (Meditations) Shuffling around the city of Bangkok, it isn’t hard to pick out the shells of abandoned buildings spread about the vast metropolis of this Southeast Asian hub. It’s a city brimming with life, colour, and lustrous corporate modernity, but amongst the urban landscape are a number of striking concrete skeletons of decay. Many of these buildings are the remnants of what were once grandiose plans for offices, hotels, or upscale condominiums, projects abandoned due to the sudden financial shock brought about by the 1997 Asian financial crisis. Thailand was one of the countries most affected by what is known locally as “Tom-yum-goong” crisis, named as such because the reasons behind the collapse are as complex as the ingredients of a bowl of the country’s signature spicy dish. While a number of locations in Bangkok and around Thailand were abandoned due to economic predicament, others were left to

gone to live in a country where vampires were rare or even extinct. For some reason, they decided that Switzerland was the country that fit the bill. Last week, a German tourist was out jet-skiing when he found a trash bag that had washed up on the shore. Inside were chunks of flesh. Autopsy results soon revealed that these were human remains, likely those of a child, who was probably male, and probably Asian. Other than that, the police had absolutely zero to go on in terms of identifying the corpse The bar girls remarked that those chunks of flesh might well belong to Rattika’s son, shaking their heads over the tragedy of it all, while the motorcycle drivers seemed disappointed that it wasn&#39;t the ravishing vampire herself. But see? Someone got murdered exactly like we said. So where was Rattika now? There was no evidence that she&#39;d been killed, and if the body in that trash bag was really Ken’s, the notion that she&#39;d gone to raise her son in a pristine, respectable country, unsullied by the taint of vampires, had to be abandoned. The drivers tried to come up with an answer, but didn&#39;t have much luck. Maybe she just took a vacation, one of them sighed eventually. If I see her, I’ll let you know.

46 rot for reasons of their own; some were failed business ventures, others were damaged in fire or sites of violent crimes, some were overly ambitious construction projects that ran out of funding, while others had simply run their course and lost their use to the community. Some office towers and condos were abandoned before they had the chance to open and a number of them never finished initial construction. Others were open for decades, serving communities as cinemas, upscale houses, petrol stations, hospitals, piers, temples, transportation centres, nightclubs, and other places of work and everyday life. Each derelict location has its own unique history, as well as its own reasons for being left behind in time, but each one is connected in the sense that they are reminders of what once was, what might’ve been, and what happens when we forget. They are no longer freshly painted, not shiny and new anymore. Windows are broken. Doors, furniture, light fixtures, and most metal has been either stolen or scrapped. They are not as they once were, nor will they ever again be. Nonetheless, despite the decay and rust that many see as unsightly blots on the landscape, the allure for urban explorers and photographers lies in identifying and capturing the remaining beauty in these forgotten locations. If we look closely, it isn’t hard to find. Deserted places in Thailand are mainly ignored by the general public, aside from people of limited financial means who use them as shelter from the acerbity of the streets, or security guards hired to look after the crumbling property. Gaining entry in pursuit of urban exploration is often as simple as just walking in, while other times it requires a bit of a “gratuity” or just a simple conversation with inhabitants or guards. Occasionally, it necessitates some stealthy manoeuvring and even a bit of calculated risk. Climbing walls or going under barbed-wire fences is not uncommon, and danger is sometimes present, though the risk is more often structural in nature than human.

47 The excitement of facing challenges and dangers is a driving force for urban explorers and photographers. Rusty metal, broken glass, unstable footing, flooded basements, asbestos, packs of stray dogs, shady and twitchy characters and other perils are ever-present. Even those of us who are more cautious by nature must admit that the rush of adrenaline resulting from finally getting into a prohibited place is just as alluring as the potential for capturing some striking images. Fear is a component of danger, but the desire to explore and need to witness what hides behind crumbling walls makes it easier to ignore the anxiety. Simply put, what’s there must be seen and captured, and the risk cannot be a distraction.

When we consider the hurried development and gentrification occurring in many cities these days, we realize that much of the past is being erased in terms of architectural and social history. People are very aware of these changes and see it happening around them all the time, so there’s often a feeling of nostalgia or holding on to the past that leaves us curious and intrigued with abandoned places. Accepting change is not always easy, and the removal of what is familiar can be difficult for us to accept as individuals and as members of a society. We must remember that changes can also represent growth and a potential for learning from the past. Acknowledging change, be it personal or societal, as cliché as it may sound, is both an unavoidable and pivotal part of living. Change should be faced, embraced, and it’s beauty identified and documented, as it can help us to both grow creatively and to foster our inner strength. 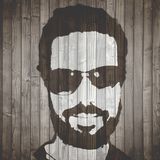