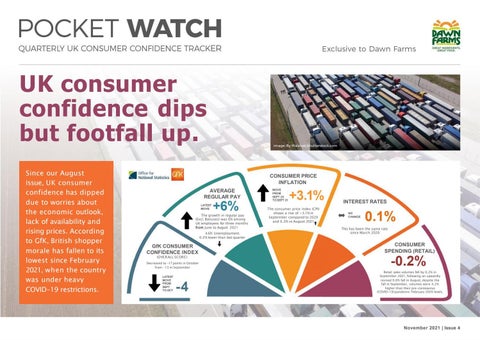 UK consumer confidence dips but footfall up. Since our August issue, UK consumer confidence has dipped due to worries about the economic outlook, lack of availability and rising prices. According to GfK, British shopper morale has fallen to its lowest since February 2021, when the country was under heavy COVID-19 restrictions.

The growth in regular pay (Excl. Bonuses) was 6% among UK employees for three months from June to August 2021 4.6% Unemployment. 0.2% lower than last quarter

This has been the same rate since March 2020

-0.2% Retail sales volumes fell by 0.2% in September 2021, following an upwardly revised 0.6% fall in August; despite the fall in September, volumes were 4.2% higher than their pre-coronavirus (COVID-19) pandemic February 2020 levels.

Food Inflation at highest rate in a year

month to -17 in October from -13 in September. It was the lowest

September, according to the latest BRC-NielsenIQ Shop Price Index.

reading since February, amid concerns over fuel and food shortages,

This is the highest inflation rate since November 2020. Following ten

interest rate rises impacting the cost of borrowing, and climbing

inflation remained steady at 0.8%. Food and drink companies are

seeing “terrifying” price rises, according to industry bosses, who have warned about a knock-on effect for consumers.

1 in 3 consumers stockpiling for Christmas

More than half of shoppers are worried they will not be able to get the food and drink they need for Christmas. This is the key takeaway from a new poll carried out by Lumina Intelligence in conjunction with The Grocer. This nervousness is already translating into consumer behaviour. The study revealed 34% of consumers have considered purchasing food and drink for Christmas before the end of October.

Is the ‘work from home’ boom ending?

Footfall across all retail destinations in the UK is rising, according to Springboard. This rise was supported by workers returning to office. Kantar’s latest analysis also reveals how these new working habits are changing shopping behaviours. “With people set to return en masse to offices and schools in the Autumn, shopping habits are expected to change,” Consumers already appear to be making more frequent top-up shops to food retailers, and there are signs of fatigue when it comes to home cooking, with demand for convenient ready meals growing by 11%. Despite these changes, shopping habits won’t return to what they were in 2019 according to Kantar, “It’s most likely that the needle will settle somewhere in between”. image: By 1000 Words/shutterstock.com

According to the British Retail Consortium (BRC), UK retail sales grew by just 0.6% in September, the lowest rate seen since January 2021. Take-home grocery sales fell by 1.2% over the 12 weeks to 3 October as the petrol crisis limited instore shopper numbers. Shoppers staying off the roads also meant the proportion of groceries bought online, which has been steadily decreasing over the past seven months, crept up to 12.4% compared with 12.2% in September.

Due to labour shortages in the wake of Brexit, meat producers are exporting beef carcasses to Ireland for butchering before reimporting them, the British Meat Processors Association said. Beef carcasses have been put on lorries and sent by ferry to the Republic to cutting and packing plants to be butchered and then brought back to Britain. The association’s chief executive, Nick Allen, commented that,“ Due to the shortage of meat workers in the UK and the limitations to recruit caused by the immigration policy, processors are taking advantage of the fact that other countries are sourcing extra labour from around the world and exporting meat to be processed and returned to this country.”

Maersk warns no end in sight to Supply Crisis

Maersk, the world’s largest container shipping group has said there is no end in sight for the global supply crisis, following its most profitable quarter in its 117-year history. CEO Soren Skou commented that congestion outside ports was worsening with retailers and manufacturers struggling to keep up with surging demand post pandemic. Surging container freight rates, coupled with labour shortages some has meant long delays in unloading cargo. Despite the need for shipping to become carbon neutral, Mr Skou has defended the move into aviation, citing that customer demand and not Maersk’s push into air freight that would determine how much cargo was transported by aircraft.

Fast food menus are finally growing again after reverting back to the basics in 2020. In 2020, most chains cut down menus to just bestselling items to make restaurants more efficient. Since the reopening of food service menus are growing which is a sign that the restaurant industry is getting back to normal.

We’ll be delving deeper and bringing you fresh consumer insights in 2021/2022. image: By T.Dallas/shutterstock.com