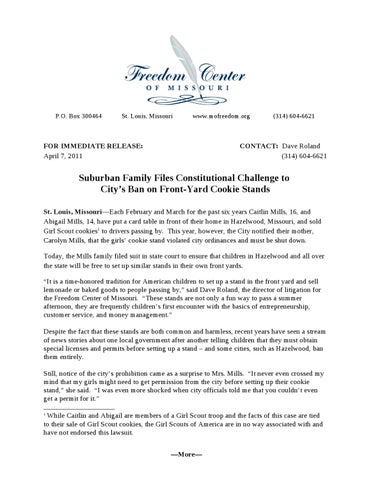 Suburban Family Files Constitutional Challenge to City’s Ban on Front-Yard Cookie Stands St. Louis, Missouri—Each February and March for the past six years Caitlin Mills, 16, and Abigail Mills, 14, have put a card table in front of their home in Hazelwood, Missouri, and sold Girl Scout cookies1 to drivers passing by. This year, however, the City notified their mother, Carolyn Mills, that the girls’ cookie stand violated city ordinances and must be shut down. Today, the Mills family filed suit in state court to ensure that children in Hazelwood and all over the state will be free to set up similar stands in their own front yards. “It is a time-honored tradition for American children to set up a stand in the front yard and sell lemonade or baked goods to people passing by,” said Dave Roland, the director of litigation for the Freedom Center of Missouri. “These stands are not only a fun way to pass a summer afternoon, they are frequently children’s first encounter with the basics of entrepreneurship, customer service, and money management.” Despite the fact that these stands are both common and harmless, recent years have seen a stream of news stories about one local government after another telling children that they must obtain special licenses and permits before setting up a stand – and some cities, such as Hazelwood, ban them entirely. Still, notice of the city’s prohibition came as a surprise to Mrs. Mills. “It never even crossed my mind that my girls might need to get permission from the city before setting up their cookie stand,” she said. “I was even more shocked when city officials told me that you couldn’t even get a permit for it.” While Caitlin and Abigail are members of a Girl Scout troop and the facts of this case are tied to their sale of Girl Scout cookies, the Girl Scouts of America are in no way associated with and have not endorsed this lawsuit. 1

The Mills family believes that if constitutional guarantees of property rights mean anything, they mean you should not need governmental permission before setting up something so harmless as a lemonade or cookie stand in your own yard. But the girls do not want people to mistake their disagreement with the city for disrespect. “We know that our city officials are working hard to make sure that Hazelwood is a nice place to live,” Caitlin Mills explained. “But even good city officials sometimes make mistakes. All we are asking is for the court to say it was a mistake for the city to tell us to shut down our cookie stand.” The implications of this case, however, reach far beyond Hazelwood’s city limits. For more than a century American courts adhered to the principle that people could use their property almost any way they saw fit as long as they were not harming anyone else. Despite this general rule, courts allowed governments to use the “police power” to create laws carefully designed to protect the public health, safety, and welfare. Over time, however, courts shifted from the presumption that citizens should be able to make use of their property to a presumption that government should be able to restrict its use. The issue in this case is whether state and local governments still face any constitutional limitations on their ability to control the use of private property. “Courts have already held that cities can control what citizens can build on their property, where they can build it… even what color they can paint it,” said Roland. “If Hazelwood and other cities can prohibit kids from setting up a harmless, temporary cookie stand in their own front yard, it is hard to say that our constitutions still offer any significant protection for private property rights. The Freedom Center of Missouri hopes to remind the courts that vigorous protection of property rights is vital to the American constitutional system and way of life.” Founded in November 2010 and headquartered in St. Louis, the Freedom Center of Missouri is a non-profit, non-partisan organization dedicated to research, litigation, and education in defense of individual liberty and constitutionally limited government. Mills v. City of Hazelwood is the Freedom Center’s third case, and its first focusing primarily on the issue of property rights. Additional information about the Freedom Center’s mission, cases, and activities can be found online at www.mofreedom.org. ### [NOTE: To arrange interviews on this subject, journalists may call Dave Roland at (314) 604-6621.]

This press release announces the Freedom Center of Missouri's newest case, Mills v. City of Hazelwood, which asks if a constitution that requires the protection of private property rights will allow a city to completely prohibit children from setting up a front-yard cookie stand. 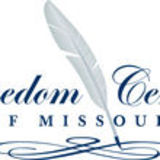