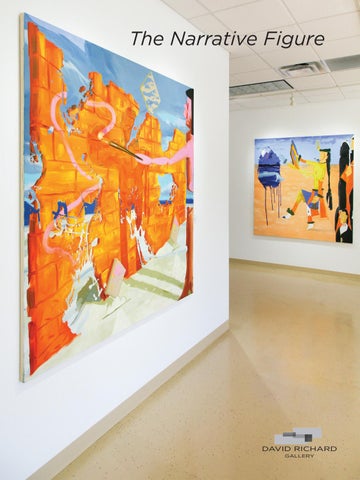 The advent of modernism in the early 20th century is often presented as a linear progression towards abstraction, with figuration giving way to more conceptual and theoretical visual imagery, as exemplified by artists such as Mondrian, Kandinsky and Pollock. A cursory look, however, demonstrates that even artists considered markers of abstraction, moved in and out between conceptual and representational imagery. Picasso, Braque, Malevich, De Kooning and Philip Guston are artists who often blurred these lines of demarcation and provided points of reference for later artists. “The mash-up of abstract and figurative imagery has allowed for a richer, broader visual tapestry, where compositional concerns intermingle with personal narratives, sometimes direct; other times implied”, says gallery co-director David Eichholtz. Each of the artists included in The Narrative Figure approach this composition differently. Cabeza de Baca, Hilsman and Self begin with a formalist context, leaving the narrative or ‘story’ to subtly and slowly emerge. For Dixon, Hargrave and Quezada, the methods and materials are a vehicle for presenting urgent, personal and social agendas.

About the Artist Esteban Cabeza de Baca Esteban Cabeza de Baca’s paintings present a combination of gestural Southwestern landscapes infused with a narrative informed by his Mexican and Native American ancestry. As he writes: ‘When I think about who I am, where I come from, where I live and who I love I think about the past. People don’t want to hear about the terrors of colonialism waged on indigenous people even to this day. The waves of merciless violence since 1492 and racist false promises lowered my relatives’ defenses yet here we stand. Now I didn’t grow up on a reservation but having Mexican and Native blood feels like I’m in a no mans land. With nowhere to call home, I’m looking in on the outside. My skin is pale but my heart is red. I have the trauma, courage and perseverance of my ancestors coursing through me. And by painting my past, present and future I give my US history a voice.’ These paintings are not just about stories and myths. They contain a true painter’s love of materials and an understanding of art history with a nod to artists such as Phillip Guston or George Condo. Cabeza de Baca received his BFA from the Cooper Union School of the Arts and his MFA from Columbia University.

About the Artist Michael Dixon

Michael Dixon explores the personal, societal, and aesthetic struggles of belonging to both “white” and “black” racial and cultural identities, yet simultaneously belonging fully to neither. The works of artists such as Robert Colescott, Beverly McIver, Michael Ray Charles, Glenn Ligon, and Kerry James Marshall have informed his work. “I use self-portraiture as a narrative device to explore the areas of identity, race, identity perception, African American history, and social justice. I often use my own racial identity as the topic of my work. I have experienced fluidity in the perception of my race and ethnicity as a light skinned, bi-racial Black man. My struggles to fit into a racial group category and how I fashion an authentic self, while constantly feeling like an outsider, is the foundational and emotional content of my work. I am primarily interested in the experiences of bi-racial people who might share in this struggle. Is there a unique bi-racial experience? My work seeks to find out. “Along with my personal identity struggles, the historical legacy of racism in the United States for communities of color informs my experiences. My current work responds to the police killings of unarmed Black men, women, and children across America. While this is a constant attack on the Black community, the increased international media attention, public awareness, and public movements are new phenomena. The recent killings of Trayvon Martin and Eric Garner to Tamir Rice and Michael Brown, illustrate that Black victims can range in age from 12 to 50 years old. This raises the question of the value of Black bodies in contemporary America, which is linked to a long history of violence against its Black population through slavery, Jim Crow, and mass incarceration. My aim is to locate myself in this discussion as a bi-racial Black man who has both been the victim of racism and has in some instances “passed” for white because of my light skin. I see this as the cost of a legacy of racism that particularly troubles me and this conversation must continue.” Born in San Diego, Dixon received his MFA from the University of Colorado at Boulder and is currently an Associate Professor at Albion College, Michigan. His work has been shown both nationally and internationally in public and private institutions.

About the Artist Jeffrey Hargrave

Jeffrey Hargrave is an African-American artist based in New York. Working in various media, Hargrave deals with representations of African-Americans, often putting them in the context of art history, remaking works by artists such as Matisse to include black figures, with racially charged stereotypical imagery. Additionally, Hargrave deals with sexuality and particularly the subject of being an African-American gay male. The messages inherent in these paintings force the viewer to confront these issues and not look away. As uncomfortable as they may be, the paintings are often infused with wit and humor and are rendered with considerable confidence. “My new work draws on the comedic influences of artistic pioneers such as Phillip Guston and Carroll Dunham, for example. I found it interesting from a stylistic and socio- economic viewpoint to channel the handwriting of these two white, straight men with the artful gumbo of the black, homosexual male experience in the 21st century. “The title of the painting Dat Nigga Would Lose His Dick,If It was not Sewn On Is a word play on the old familiar saying, such as, for instance: ‘He would lose his head were it not attached to his shoulders’, etc. By taking a familiar, everyday saying, like the former and infusing it with ‘ethnic slang’. The phrase takes on a new meaning, turning casual conversation into a potent critique on ‘perceived’ ideas of black male sexuality.” Hargrave studied at the North Carolina School of the Arts, the Rhode Island School of Design and the Skowhegan School of Painting and Sculpture. A survey of his work was held in 2015 at the Bronx Museum of Art.

About the Artist Daisy Quezada

Daisy Quezada is a Santa Fe based sculptor utilizing delicate porcelain slip and found objects to create powerful statements on gender and violence. The fragility of the female undergarments contrast dramatically with the symbolic aggressiveness of pickaxes and shovels. “Working with issues of personal and social identity I use materials that talk to the fragility of life; in particular to those encompassing women from the southwest borderlands of the United States and Mexico. Having grown up between two cultures I have witnessed an abundance of machismo, that isn’t questioned after it has become a part of every day life. Predominantly women of this area tend to go on with their lives hoping to serve men to the fullest, concealing their own identity with a veil. By using clothes as a surrogate I hope to talk about the absence and fullness of these women. “Using an adapted technique of lace draping I take these garments through a transformation process where porcelain slip becomes a callus that attempts to mend and hold any information that the article of clothes may carry. Be it abuse sorrow or abandonment textiles tend to carry an individual identity even when left behind. When fired what remains is an untainted white delicate sculpture with characteristics of bone as a visual. Placed alongside items that reference a particular location the garment is activated seeming to breath and come to life to tell its story where it can be heard and seen.” Quezada graduated from Santa Fe University of Art and Design with a BFA in Studio Arts and received her MFA in Ceramics from the University of Delaware.

About the Artist Justice Whitaker

Filmmaker and photographer Justice Whitaker creates intricate collages from original photographs he shoots himself. He cuts every photograph by hand, and creates his compositions without any digital prcoess. Whitaker uses found materials to mount and frame his work, which creates another connection to the communities in which he works. Justice identifies as a storyteller, and his extensive archive of photographs weaves a tale as intriguing as his finished pieces. Whitaker addresses ideas of identity, race, class, spirituality and other social issues in his work. Whitaker received his BFA from New York University in Film and Television and a Masters in Education from Long Island University. From 2013 and 2016, Whitaker was Film Professor at the Santa Fe University of Art and Design.

The advent of modernism in the early 20th century is often presented as a linear progression towards abstraction, with figuration giving way...

The advent of modernism in the early 20th century is often presented as a linear progression towards abstraction, with figuration giving way...