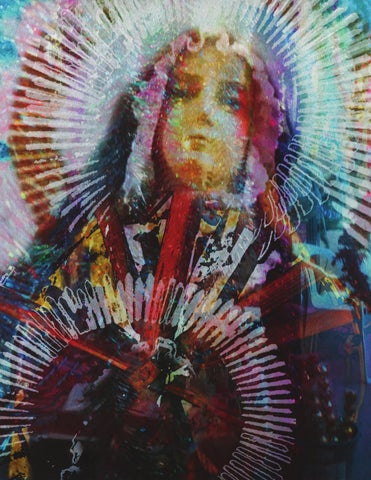 Michael Scott has been a painter for decades, noted for using the medium to investigate the structure—and to deconstruct—the narrative, in particular the mythic narrative of the American West. His latest body of work takes a new direction in terms of subject matter and style, arising as it did out of his recent travels to San Miguel, Mexico. While there, he was struck by the ubiquitous image of Mary, the mother of God: an icon who seems to live comfortably among her people, popping up not just in churches but in markets and bars, on street corners and along highways. Tiled or painted onto exterior walls, family guests can often find her interiorly, in home altars lit by candles and Christmas lights. In Catholic regions all over the world, there are several personifications of Mary, but she is popularly known throughout Latin America—including the Southwestern United States—as the Virgin of Guadalupe. In fact, la Guadalupaña is the patron saint of the Americas. Her apparition, complete with roses, is said to have materialized to an indigenous man named Juan Diego on Tepeyac hill in what is now Mexico’s Federal District, in the 16th century, shortly after the Spanish invasion of the city known to the Aztecs as Tenochtitlan. Mary represents the divine feminine and is available to all believers, including the poor, the forgotten, and the unwanted. She is Mother, an ever-present source of succor to the otherwise disenfranchised and unloved masses. For Scott, it is hardly farfetched to contextualize the populist images of Mary that he discovered in San Miguel through a feminist lens. His diverse depictions in this exhibition insinuate the presence of Mary as a real woman—whose gender goes beyond a one dimensional reading of either saint or whore as is too often portrayed in contemporary media. At the same time, his paintings glow with a luminous quality that is baroque and otherworldly, as compelling as they are mysterious. Scott’s spirited working of his surfaces denies instant access to the narrative at hand, and that absence is at least as potent as the undeniable allure of the women in these pictures. Drawn from the ubiquity of popular culture, these are intensely personal images. While upon first glimpse the paintings in FOUND obviously reference the complex iconography of the Baroque period in all its theatricality, they also come across as surprisingly contemporary. The exhibition is cleverly hung, to be discovered from various positions in the gallery as if the viewer were making a pilgrimage through the Stations of the Cross. These paintings are edgy, even quite naughty despite (or perhaps because of) their frank gorgeousness. Scott conflates a religious icon with the human body and its insistent physicality, and thereby, the suffering of the living Jesus on the cross. Mary casts her eyes heavenward, seeking the bliss of unity with God, having suffered unbearably for her Son, and by extension, on behalf of all of God’s children. And she looks darned good doing it. The narratives in FOUND are layered and loaded with abstracted meaning. Several of the paintings read like the crumbling stone walls of ancient, often disintegrating churches that have long since passed the glory days of the Colonial era when gold and silver filled the coffers of Spain’s treasury and her religious edifices were earthly shrines to Heaven’s riches. Key to the achievement of multiple, even paradigmatic, connotations in Scott’s work is his unique process, which incorporates montages of photographs, taken by Scott in San Miguel, printed digitally on steel

and then worked extensively by hand in the studio. In a sense, these are action paintings, dependent upon a moment in time and the happenstance of technique. They represent the artist’s willingness to loosen the rigors of conscious control and allow the skill sets acquired over a lifetime to dictate the ultimate outcome. As the years have weathered the icons of Mary that Scott observed in San Miguel, so to do the processes of burnishing and over-painting the photographs that deconstruct the “original” work, creating an ancient palimpsest within the treasures of today. Scott’s Mary lives and breathes, flickers and sighs, a woman of eternal mystery. Kathryn M Davis Santa Fe, May, 2014

Michael Scott was born in the Midwest. He studied painting at the Kansas City Art Institute where he received his BFA; He was the recipient of a Skowhegan painting fellowship, Skowhegan Maine and received his MFA from the University of Cincinnati in Cincinnati Ohio. His fascination for the west led him to Santa Fe where he currently lives and works. In his earlier work, Scott created elaborate conceptual narratives using the American Landscape and the American West as his backdrop, for which he has had numerous gallery and museum exhibitions. He has exhibited in New York, Santa Fe, San Francisco, Cincinnati, Kansas City, Los Angeles and Washington DC among other cities. His work was included in the 41st Corcoran Biennial Exhibition of Contemporary American Painting has been featured in numerous group exhibitions and the subject of numerous critical reviews, catalogues and publications. Scottâ&#x20AC;&#x2122;s artwork is included in many private and corporate collections as well as the permanent collections of The Butler Institute of American Art, Youngstown, OH, The Corpus Christi Museum of Art, Corpus Christi Texas, The Cincinnati Art Museum, Cincinnati Ohio, The New Orleans Museum of Art New Orleans Louisiana, The Autry National Center for the Arts and Culture, Los Angeles, CA, The Tyson Collection of Contemporary Art, Springdale, AR, The Southern Ohio Museum of Art, Portsmouth, OH, The Hunter Museum of American Art, Chattanooga TN, The Whitney Western Art Museum - Buffalo Bill Museum, Cody WY and The J.B. Speed Art Museum, Louisville KY among others.

The newest paintings by Michael Scott explore entirely different visual content and subject matter for the artist, the female figure in reli...

The newest paintings by Michael Scott explore entirely different visual content and subject matter for the artist, the female figure in reli...