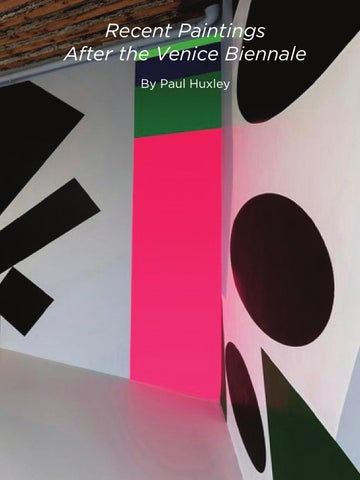 Recent Paintings After the Venice Biennale By Paul Huxley

at the Azerbaijan Pavilion

Recent Paintings After the Venice Biennale By Paul Huxley

Huxley, who studied at Harrow  School of Art and the Royal Academy Schools, is sensitive to many traditions, and these are perceptible in a covert way in his largely minimalist work. But despite the fact that we sense other presences in his work, his own style is personal and highly distinctive, informed by architecture, design, art history, and, judging from his color sense, a strong contrarian streak. He also, despite his overtly minimalist surfaces, reveals a tenuous sense of perspective, teasing us with the possibility of illusory depth. In 1964 he participated in ‘The New Generation’ exhibition at the Whitechapel Art Gallery in London with Patrick Caulfield, David Hockney, John Hoyland, and Bridget Riley. Also in the 1960s, but in New York, he became very engaged with the work of the Abstract Expressionists--most notably, with Mark Rothko, Barnett Newman, Robert Motherwell--while simultaneously taking the measure of Andy Warhol and Jasper Johns. “The 1960s artists were really important in my mind,” he says, explaining that it was the spirit in which they worked that interested him—not their style. But closest to his heart, he says, is classic modernist painting of the late 1930s in particular—one thinks of Mondrian, Matisse, Hans Hofmann, Charles Demuth, and Paul Klee. These influences and experiences constantly meld and recombine in Huxley’s work, forming a kind of synthetic modernism. We see this most clearly In his paintings, because they communicate his intentions clearly. They engage observers in conversation as they try to establish meaning and a place for themselves in the works. His works, while not inaccessible, are unexpected and unlikely. But this unlikelihood is far from spontaneous. As he explains, “I make lots of preparation—a drawing, a small painting, for example.” Then he adjusts proportions. He considers this “an economy of time and energy,” whereby he can “focus on the concept.” He is clearly not a Process artist. “The importance of the work is in the original concept,” he says, “more than the playing out of it.” He doesn’t expose the process. Huxley’s attitude toward abstraction is empirical: his work is essentially “abstracted” from things he has seen. He starts with a simple concept and step-by-step complicates it. That explains why he likes to work in series: the point of departure opens myriad doors. Frank Stella famously commented in 1966, “What you see is what you see,” though with some of Stella’s work, what you get is a translation of motion into gesture or allusions to cars and the racetrack. There is subject matter and meaning to that. And, by the same token, Huxley maintains, “Abstract art can have subject matter.” in other words, it begins somewhere, though it is not always clear where. With Huxley, specificity is elusive, even if you do get geometry and motion and vague hints of the essence of things—that is, the abstracted shapes underlying them. The relations among his colors in his stacked squares and rectangles are quite eccentric and challenge viewers to “read” them as if they were geometric hierogplyphics, undecipherable messages.

His stacked, painted-steel sculptures, like those in this show, “New Paintings After the Venice Biennale,” accompanying the paintings with their own playful, animated shapes, differ from the works on canvas in that they are isolated, stand-alone structures. At the same time, as with some of the paintings, they contain a suggestion of Surrealism in shapes that evoke Giorgio de Chirico’s geometric landscapes. They call to mind the metaphysical artist’s depictions of space, depth, and distant time. And some of those forms return us to our world because of their active attitude, reminiscent of an artist like Joel Shapiro. So we move back and forth in conceptual space and time with these works. From the geometry in motion of Stella to language and lettering as idea and image in Lawrence Weiner to consideration of the primacy of the object itself, Huxley translates into and from abstraction, exploring geometry and its free associations. In some of his works, Chinese characters in graphic form look like other alphabetical images and constructed forms. Huxley engages the extremes of modernism. There’s a clarity at one end of the spectrum, most notably in the “Torus,” or figure 8 works, and a wildness that could almost be viewed as a geometric translation of Ab Ex--a geometric gesturalism--in After Venice 3, for example. In this work, we can experience the dissonance of contemporary music. This painting is the embodiment of contradiction: its clashing colors include forest green, turquoise, purple, and sky blue, while its perspective is zigzagged with horizontal ovals, like stepping stones pushed by dark, sharp edges. It is a still picture in constant motion. If the images in many of his series are lined up in a row, we can detect the smallest changes as we move from one to the next. As with GIorgio Morandi, tiny shifts—in scale or placement can open up a new perspective or composition. Everything is dependent on what comes before it. Each work goes back to the original in such a way that the paintings when lined up look like animated images, morphing into variations on the original. Huxley says, “I am not in favor of making work look more difficult than it is,” but the secrets we sense in all his work belie that idea. In Huxley’s series of three “A Square and a Circle,” a slight oblong and an oblique square on the left play off against a column of stacked rectangles in uncomfortable hues—such as acid green, topped by yellow and then black or, working upward, mustard, then black, scarlet, and acid green--on the right. The shapes vary only a bit in their relation to one another but the colors in the column differ in each of the three. The paintings are also provocative in the way they offer the possibility of representation. For instance, the shapes and perspectives call to mind stovetop burners, as if huxley were parodying his creative process by comparing it to cookery. The title of the series brings to mind the name of a group of modernist artists that the Uruguayan Torres-Garcia co-founded in the 1920s in Barcelona. Called Circle and Square (Cercle et Carre), the movement included Mondrian and Jean Arp and was concerned with “opposing Surrealism through a rigorous, often rational approach to art,” as the exhibition label for the show dedicated to Torres-Garcia, at the Museum of Modern Art in New York puts it. These paintings can appear bipolar in their play of forms and colors. We experience attraction and repulsion—our eyes are being pulled to one side and then the other. Agreeable forms in uncomfortable colors defy us to look more closely. Huxley employs his geometric tools to psychological effect. They project unease and make us anxious in our assessments.

Huxley is a master of the affective. There is an undeniable rhythm in the relationship of these forms that derives directly from his control over the viewing experience. These works are at once still and activeâ&#x20AC;&#x201D;flat forms with sharp angles charging into surrounding spaces. Huxley admits to having named paintings after music, and it is in music we sense the source of his motion. Huxleyâ&#x20AC;&#x2122;s paintings appear so simple and graphic on first glimpse, but they are complex, ungraspable. We feel we must look again because we know Huxley is doing something behind our backs. Barbara A. MacAdam

Born in 1938, Huxley studied at the Harrow School of Art and later at the Royal Academy Schools, graduating in 1960. The seminal â&#x20AC;&#x2DC;New Generationâ&#x20AC;&#x2122; exhibition at the Whitechapel Art Gallery in 1964 led to a series of grants and awards that brought him to New York, where he met Mark Rothko, Barnett Newman, Robert Motherwell and even Andy Warhol. Recognized for his contributions and achievements to contemporary art, Huxley was elected to the Royal Academy of Arts in 1987. For fourteen years until 2014 he served as Treasurer and briefly as President. He was Professor of Painting at the Royal College of Art from 1986 until 1998 after which he was elected Honorary Fellow and Professor Emeritus. Many of his students from these years such as Dinos Chapman, Nigel Cook, Dexter Dalwood, Andrew Grassie, Tracey Emin, Chantal Joffe and Chris Ofili are now established figures on the international art scene. Works by Huxley are held in private and public collections throughout the world. In the United States his work can be found in the following institutions: The Museum of Modern Art, New York, the Albright-Knox Gallery, Buffalo and the Neuberger Museum, Purchase, State University of New York.

Recent Paintings After The Venice Biennale by Paul Huxley

The David Richard Gallery is delighted to announce the first solo exhibition of paintings and sculpture in the US by the renowned British ar...

Recent Paintings After The Venice Biennale by Paul Huxley

The David Richard Gallery is delighted to announce the first solo exhibition of paintings and sculpture in the US by the renowned British ar...