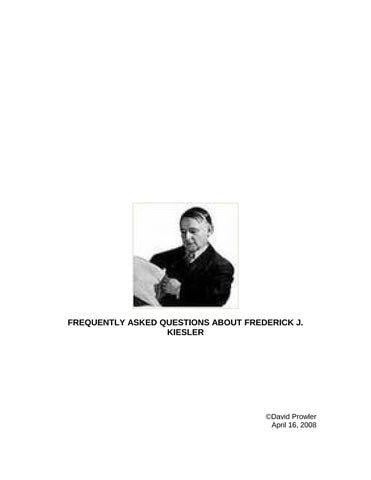 This is a little piece about surrealism and architecture, about gossip, about two things that look a lot like a woman’s breast but aren’t. It’s got a suicide and its aftermath, Ernest Hemingway, Andre Breton, Arshile Gorky, and Marcel Duchamp. It’s got a cameo by a Hollywood bombshell. At the center is a ‘difficult, at times insufferable, character, a tireless selfpromoter with the arrogance that often afflicts very short men “. i A man who “proposed nothing less than a total reformulation of art that would liberate it from the confines of the isolated aesthetic object.” ii Being with him “was like touching an electric wire that bore the current of contemporary history.”iii That guy was Frederick J.Kiesler.

FREQUENTLY ASKED QUESTIONS ABOUT FREDERICK J. KIESLER Do people frequently ask questions about Frederick Kiesler? No they don’t. Hardly anyone knows about him anymore. If they do, it’s because of the wild gallery design he did in 1942 for Peggy Guggenheim’s Art of this Century Gallery in NY:

with curved walls, unframed art sticking out of the walls on baseball bats, darkness.

Where was he born and what if he had stayed there? Some sources say he was born in Romania in 1890. Wikipedia says he was born in the Ukraine. I’ve read that he was Austrian. In any event, his neighbors would have shoved him into a furnace.

What kind of home did he make in New York? In 1933 he set up house in the penthouse at 56 Seventh Avenue. He could see both the Hudson and East Rivers, the Statue of Liberty and the Empire State Building.

What did his doorman say about his penthouse? It was “a cross between a studio, apartment, and junk shop.” vii His widow Lillian lived there until she died in 1992. I called her there once. She always referred to Kiesler as “Kiesler”. She told me that in Paris they always stayed at the Hotel Lutetia.

Did he have any friends?

He designed buildings, shop windows, theatres and theatre sets, furniture, and art exhibits. He wrote books on product displays, journals, and poetry and sculpted. But what was he, anyway? What kind of question is that? He was Frederick J. Kiesler.

Did he feel bad about not being more successful as an architect? “He

felt cheated by fate and maligned by some of his European fellow architects. ‘They sailed in on the fame of overblown ado about the Bauhaus. And now they use their exalted chairs at Harvard and Yale to dominate architecture in America. They build and they scheme and they build and they scheme. They copy each other in arrogance. All my projects went down the drain in the depression. Had I waited like Mies or Gropius or Breuer, I would not have had to design the display windows for Saks Fifth Avenue to pay the rent or eat.’” “ix

Maybe there were other reasons his architecture practice wasn’t a success?  He wasn’t very practical. “If Kiesler wants to hold two pieces of wood together, he pretends he’s never heard of nails or screws. He tests the tensile strengths of various metal alloys, experiments with different methods and shapes, and after six months comes up with a very expensive device that holds two pieces of wood together almost as well as a screw.” (Architectural Forum, volume 86, no. 2, 1947:140)x

 Here’s another clue. The names of some of his proposals: The city in space∗ The endless theatre (shaped like an egg)∗ The endless house∗ Tooth house (1948) * Space stage (1924)∗ City in Space (1925)∗ Horizontal Skyscraper (1925)∗ Endless Theatre Without a Stage and Four Dimensional Theatre (1926)∗ The Telemuseum (with walls designed as receiving screens for transmitted pictures – in 1927)∗ The Flying Desk (1930)∗ Nucleus House (1931)∗ Murals Without Walls (1936)∗ Vision Machine (“quasi-scientific, grandiose yet vague, ideogrammatic and poetic rather than diagrammatic”)(1937)∗ Mobile Home Library (1938)∗ Hall of Superstitions (1947) Grotto for Meditation (in the shape of a dolphin, underground) (1962)∗ ∗ Unbuilt

Now we have buildings that look like fish, clouds, transformers. Rooms that look like Hebrew letters. Buildings incorporating what Kiesler called “biotechniques”. But not then. Who did CBS crown “Architect of the Year” in 1951? You guessed it – Frederick J. Kiesler!xi

Why wouldn’t Ernest Hemingway shake his hand? “Hemingway froze in his bastard position and said, ‘I do not shake hands with Germans or Austrians”’. With that he turned around and away and disappeared into the café. The first World War was apparently not over for him yet.” [It was 1925.] We have become Americans. He could have shaken hands with us now. But he is gone.”xii

The Shrine of the Book, Jerusalem 1965 Kiesler was The architect.

The catalogue of Le Surrealism en 1947, a show designed by Kiesler.

How did Kiesler cause the painter Roberto Matta to be excommunicated by the Pope of Surrealism?

Kiesler was really close friends with Arshile Gorky, the painter. He accused Matta of triggering Gorky’s suicide by having an affair with Gorky’s wife. According to the Kiesler Foundation: “After Gorky’s suicide, painter Roberto Matta was excluded from Surrealism and returned to Europe. Kiesler was considered responsible for the purge of the Chilean artist because of a letter to Breton which remained undisclosed for many years. What did Kiesler do or say to harm Matta? Was he responsible or was he only a puppet in the hands of the mighty priests of Surrealism?” xiii Weren’t there other reasons why Gorky might have hanged himself in that barn in Connecticut? I’ll say. Gorky's later years were filled with immense pain and heartbreak. His studio barn burned down, he had cancer, his neck was broken and his painting arm paralyzed in a car accident, and his marriage was already on the rocks.xiv

Weren’t the surrealists a bunch of hypocrites?

Hold on, these questions are supposed to be about Kiesler. But, yes, they were. How could they be so devoted to L’amour fou – crazy love, the freedom to act out the mandates of the unconscious, and yet at the same time be so misogynous, homophobic, and Stalinist? And what had Matta done that they hadn’t? Even Kiesler “had mistresses wherever he could find them.”xv Some of them anyway. In fairness, some of the Surrealists were women and some were homosexuals and not all were Stalinists. Duchamp was so mad at Kiesler for accusing Matta that they never spoke again.

“The so-called artist must learn only one thing in order to be creative – not to resist himself, but to resist without exception every human, technical, social and economic factor that prevents him from being himself.”

â&#x20AC;&#x153;Separatism, segregation, isolation in our social life must make way as never before to integration of purposes in all fields of endeavor. It will bring greater appreciation of our individuality, not conformity, simply because caring for each other is safeguarding the respect and esteem for every one of us.â&#x20AC;?

â&#x20AC;&#x153;Poetry and art, the forerunners of social revolution, should now take the lead in promoting the content of this age of falling boundaries.â&#x20AC;?

“Art can no longer live in mid-air nor architecture on the ground of business. That’s over.”

â&#x20AC;&#x153;There is hardly any difference between the appraisal of the skill of a bullfighter and of the skill of a painter or an architect or a writer. Those in the audience want to see nature dominated, for verification of their own being â&#x20AC;&#x201C; and they get it in the majority of cases, through the artist as well as the matador.â&#x20AC;?

â&#x20AC;&#x153;Our Western world has been overrun by masses of art objects. What we really need is not more and more objects, but an objective.â&#x20AC;?

How does this end? The Shrine of the Book, the first Kiesler building ever built, was opened in April 1965. In Jerusalem, it houses the Dead Sea Scrolls. 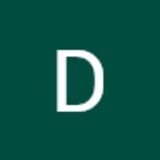