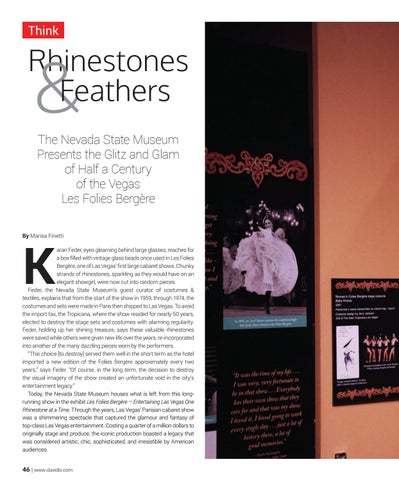 By Marisa Finetti aran Feder, eyes gleaming behind large glasses, reaches for a bo filled with vintage glass beads once used in es olies erg re, one of as egas first large cabaret shows. Chunky strands of rhinestones, sparkling as they would have on an elegant showgirl, were now cut into random pieces. eder, the evada tate useum s guest curator of costumes te tiles, e plains that from the start of the show in , through , the costumes and sets were made in aris then shipped to as egas. o avoid the import ta , the ropicana, where the show resided for nearly 0 years, elected to destroy the stage sets and costumes with alarming regularity. eder, holding up her shining treasure, says these valuable rhinestones were saved while others were given new life over the years, re incorporated into another of the many da ling pieces worn by the performers. his choice to destroy served them well in the short term as the hotel imported a new edition of the olies erg re appro imately every two years, says eder. f course, in the long term, the decision to destroy the visual imagery of the show created an unfortunate void in the city s entertainment legacy. oday, the evada tate useum houses what is left from this long running show in the e hibit Les Folies BergĂ¨re â&amp;#x20AC;&amp;#x201C; Entertaining Las Vegas One Rhinestone at a Time. hrough the years, as egas arisian cabaret show was a shimmering spectacle that captured the glamour and fantasy of top class as egas entertainment. Costing a uarter of a million dollars to originally stage and produce, the iconic production boasted a legacy that was considered artistic, chic, sophisticated, and irresistible by American audiences.