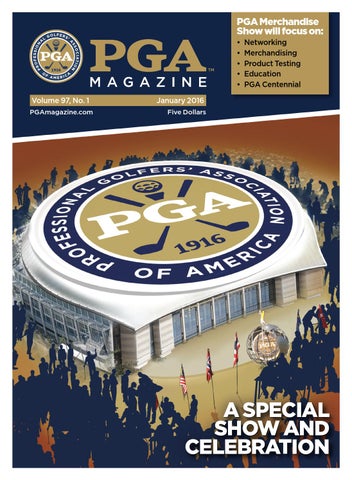 A SPECIAL SHOW AND CELEBRATION

here are long-held beliefs in the therapeutic and rejuvenating qualities of hot springs. Perhaps it is just a coincidence that Warner Springs Ranch Resort has been rejuvenated by Pacific Hospitality Group, which bought the resort in 2013, after it had closed 18 months earlier. The site of natural hot springs, the resort also includes a golf course that holds many therapeutic qualities of its own. “It really hurt the community when the Ranch shut down,” says Roxanne Mueller, the PGA director of golf at Warner Springs Ranch Golf Club. “We’re building the community back through the course. It’s the same course that they remember, and we’re creating a welcoming environment. This course is made to walk. It is so beautiful and quiet. The solitude feels like the way golf is supposed to be played.” Editor’s note: Perched at an elevation of 3,000 feet, Warner This is the 10th in a series of articles Springs Ranch features sweeping views to surroundhighlighting the ing mountain ranges, the white dome of Palomar important Observatory and Lake Henshaw. relationship “The mountains in the backdrop frame most of between GCSAA the greens and make it really scenic,” says Mike superintendents Rosales, Warner Springs’ superintendent and a 10and PGA of America year GCSAA member. “We’re adding a new pracprofessionals. tice area, more villas and condos. We’re also These stories are considering the addition of nine more holes across being published the street, which would bring us to 27. With all simultaneously in these amenities, I think people will love getting both GCM and PGA Magazine. away for a few days.”

The 2,500-acre, Western-style ranch resort is located just over an hour northeast of San Diego, site of next month’s Golf Industry Show, in the Julian foothills. It was settled by John Warner in 1844 as a cattle ranch and trading post near the intersection of the road connecting Los Angeles and San Diego to Yuma, Arizona, in what was then known as San Jose de Valle (and later renamed Warner Springs after Warner). A health and wellness retreat opened on the property in the 1920s and gained fame for its therapeutic natural hot springs and spectacular rural beauty. The 6,775-yard, 18-hole, par-72 golf course was designed by golf course architect David A. Rainville and opened in 1965. The resort also features, or will feature in future phases, a 27,000 square-foot main lodge, 250 casita units, two restaurants, a winery and vineyards, four tennis courts, a beach club and sand volleyball courts, an equestrian center, hiking and biking trails (including a portion of the 2,600mile Pacific Crest Trail that spans from Mexico to Canada), a private airport, general store, post office and medical buildings. Pacific Hospitality Group also owns Salt Creek Golf Club in Chula Vista, California, and owner Bill McWethy was pleased with the contract work Rosales had been doing on various golf course projects there the past year. When McWethy bought Warner

Springs Ranch Resort in 2013, he asked Rosales to be the superintendent there. “I had played Warner Springs Ranch four or five times back in 2000, so I knew it was a really nice area and I liked working with Bill,” Rosales says. “We’ve changed a couple holes and shaped a few fairways. We added drainage, added bunkers, added a dogleg and pond (on No. 3), put in 12 new tees, lengthened the course 300 yards, and replaced the cart paths. It was a great process and a lot of fun.” Part of what made the resuscitation of the golf course after its 18-month closure so much fun was having input on the renovations. “It has been rewarding in the sense of seeing how far we’ve come,” explains Rosales, who worked closely with architect Cary Bickler and golf course builder Eddie Kokorean on the recent changes. “They work so well together. They always made a point to consider everyone’s ideas. It was incredible to see them work. They would drive around, Cary would sketch it out on a pad of paper, and Eddie would jump on a ‘dozer and bring it to life.”

tionships. And communication is what Rosales and Mueller have used to build their professional relationship. “We’re in contact every day,” Mueller says. “So much of it is trust. He knows his stuff. I’m always asking him questions. He makes my job easier.” “We work well together and are in constant contact,” Rosales adds. “We’re on the same page. It helps that we both play and enjoy playing, so that creates camaraderie because we both understand what golfers like and want.” Mueller played golf at California State University, San Marcos and graduated Cum Laude from there in 2011 with a degree in kinesiology and an emphasis in exercise science. She has been playing golf since the age of 4 and passed the PGA’s Playing Ability Test (PAT) on her first try. “Roxy is very cooperative and understanding,” Rosales says. “She is very upfront and helpful to address any issues. She is super nice and professional. She makes everyone here feel welcome and really understands hospitality. That is the business we’re in, making it a good experience.” Providing a good experience and making people feel welcome is a talent that Warner Springs Ranch needed in that role. “When I came on board and started putting together (the rest of) this team, some people had doubts about bringing in a young woman to be the director of golf at Warner Springs Ranch,” Casper says. “Roxy is the best hire I’ve made in 11-and-ahalf years in the business. She brings the best combination of customer service and golf knowledge. She is serious, client-based, and smart as a whip.” Mueller was working at Starbucks after college, where she would chat up customers wearing golf clothes about where they were playing. She got to know Greg Milligan, a regular customer who would come in on his way to work as the director of golf at San Luis Rey Downs Country Club. Milligan recognized her knowledge of the game and knack for cus-

Previous page: Roxanne Mueller and Mike Rosales have helped revitalize Warner Springs Ranch Resort. Left: Billy Casper’s golf bag is on display as a reminder of teamwork, which Mueller (below at left) learned about during her time as an assistant golf coach at Cal State University, San Marcos.

That kind of teamwork during renovations is exactly what Warner Springs Ranch would need between its superintendent and director of golf as it looked to the future. Rosales and Mueller had never met, held no preconceived notions about each other, and hit it off immediately. “Their relationship is so important to our success,” says Byron Casper, the corporate director of golf for Pacific Hospitality Group and a PGA of America member in his own right. “They have a close relationship, as they use each other for advice and to bounce ideas off of. They are working together to create memories for customers. “I’m a big believer in the Billy Casper (Byron’s late father) philosophy that relationships matter. Those relationships behind the scenes are paramount. Everyone doesn’t get that, which is unfortunate. I feel lucky to have Mike and Roxy at Warner Springs Ranch Resort.” Casper says communication is the key to rela(password: PGAmag007) www.pgamagazine.com | January 2016 |

tomer service and offered her a job at San Luis Rey Rosales credits Dave Major, CGCS at The Crosby Downs. Mueller became the assistant golf profes- in Rancho Santa Fe, and Mike Hathaway, CGCS at sional there, with side jobs in merchandise sales at The Bridges, as his biggest mentors. “I take some of their management practices and The Golf Club of California at Fallbrook and as the create a formula of my own,” points out Rosales. assistant women’s golf coach at her alma mater. “I’ll always be grateful to Greg for giving me my “We’re in the high desert, so it’s a sandy dirt, but it’s start,” Mueller says. “I didn’t realize until later that healthy dirt. When it rains we get flash flooding, he paid my way through PGA school out of his own but it flushes right through and we never have pocket. And when Warner Springs Ranch called standing water. We have a variety of grasses, but our greens are 80 percent bentgrass and only 20 perhim about this job, he recommended me.” cent Poa annua. We have well water so we’re lucky Looking to the future in that we’re only paying for electricity, but we keep Warner Springs Ranch had its grand re-opening it dry so that it is fast and firm. Nobody likes it when Nov. 5, featuring a ribbon cutting with local offi- the ball sticks in the ground. This time of year we’re cials and a charity tournament benefiting local really just handwatering greens.” Warner Springs’ charities. Mueller and Rosales are thrilled to see their hard work come to fruition, as The value of education well as impact the future of the community. When the Golf Industry Show visits San Diego on Mueller is creating the framework at Warner Feb. 6–11, Rosales plans to attend. “I really enjoy Springs Ranch for a variety of collaborative teach- the seminars, meeting vendors, and finding small ing opportunities. She hired a capable assistant, businesses like ones we’ve done business with,” Rosstarted golf lessons and held a series of clinics for ales says. “You can find really supportive partners women golfers. They are getting involved with jun- with good prices and get great recommendations ior clinics and are also in discussions with a school from peers.” on the property about involving golf in the physical Mueller has never been to the Golf Industry education curriculum. Show, but has enjoyed attending PGA Section “It has been really fun to switch from projects to meetings, so she is planning to register as well. maintenance now that we have golfers,” Rosales says. “I really love the networking and other perspecRosales earned a degree from MiraCosta Col- tives at seminars, so I go to as many education oplege in Oceanside, California, and a turf manage- portunities as possible,” she says. ment certificate from Southwestern College in Chula That love of continuing education to improve Vista. He has been the superintendent at Escondido the experience for golfers is good business, and (California) Country Club, Eagle Crest Golf Club Warner Springs Ranch Golf Club is back in busiin Escondido, and an assistant superintendent at ness. It isn’t the famed hot springs breathing life Escondido Country Club, Del Mar Country Club back into the golf course, though. It’s Mueller and in Rancho Santa Fe, California, and The Bridges at Rosales handling that job this time around. ■ Rancho Santa Fe. He counts San Diego GCSA pres- Bill Newton is a freelance writer based in St. Louis ident Rob Browns, the golf course superintendent and the former public/media relations manager for at their sister course, Salt Creek, as a huge resource. the GCSAA.