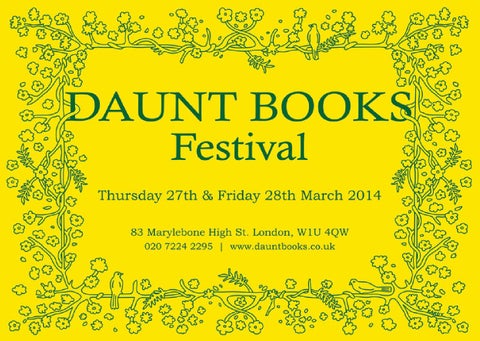 Celebrating Virago Modern Classics Maggie O’Farrell, Susie Boyt & Deborah Levy talk to Lennie Goodings 10.00-10.45am - £5 including a fresh juice provided by The Natural Kitchen Some of today’s most notable women writers talk about which Virago Modern Classics continue to inspire them. Favourites include novels by Muriel Spark, Angela Carter, Barbara Comyns, Molly Keane and Elizabeth Taylor. This is a unique opportunity to hear writers talk as readers, discussing the ways in which these enduring classics have influenced their work. Maggie O’Farrell is an award-winning novelist. The Observer praised her most recent book, Instructions for a Heatwave, as ‘addictive… told with real humanity, warmth and infectious love.’ Deborah Levy is a novelist, playwright and poet, whose recent novel Swimming Home was shortlisted for the Man Booker prize. Susie Boyt is a novelist, memoirist and also a journalist for the Financial Times. The Literary Review described her novel The Small Hours as ‘an absolute gem ... exquisite, diamond-bright and lacerating to the hardest of hearts’. Lennie Goodings is the head of Virago, the publishing house which has championed women writers for over forty years.

BRIGHT YOUNG NOVELISTS Adam Foulds, Rebecca Hunt and Evie Wyld talk to Edmund Gordon 12.00-12.45pm - £5 including a Ginger Pig sausage roll Lunch break event – sneak out of the office and eat your lunch while enjoying some food for thought! In an industry which favours established names and where new writers struggle to make their voices heard, these young novelists have enjoyed astonishing success. Three writers of a talented new generation read from their books and discuss their work with a young literary critic. Poet and novelist Adam Foulds was shortlisted for the Man Booker Prize with his first novel The Quickening Maze. His new novel In The Wolf’s Mouth is set in Sicily during the Second World War. Rebecca Hunt will be talking about her new book Everland. Her first novel Mr Chartwell was praised in the Guardian as ‘a vivid, moving delight’. Evie Wyld is a novelist and a bookseller. The Spectator says: ‘It is no surprise that she has been included on every possible shortlist of talented young authors to look out for. Evie Wyld is the real thing.’ Edmund Gordon is a literary critic, who has written for the Guardian, the London Review of Books and The Sunday Times, among other publications. He is a lecturer at King’s College London, and is writing a biography of Angela Carter.

IN PRAISE OF SHORT STORIES A.L. Kennedy, David Constantine and Helen Simpson talk to K.J. Orr 1.30-2.15pm - £5 including hot chocolate provided by Rococo Lunch break event Short stories have never been more celebrated as a literary art form, or more popular with readers. Join us for an inspiring discussion of their merits and charm, and listen to a dazzling array of short story writers read their work. Witness just how much can be achieved in a short story - as Alice Munro said in her Nobel Prize acceptance speech: “Everything the story tells moves you in such a way that you feel you’re a different person when you finish.” A.L. Kennedy is a writer of short-stories, novels, and non-fiction, and she is also a journalist for the Guardian. Her new short-story collection All The Rage is a dozen ways of looking at love, written with her signature blend of humour and darkness. David Constantine is an award-winning writer, whose work includes poetry and translation as well as short stories. Helen Simpson is a prolific writer of short stories, whose subtle and intimate work has often been compared to that of Katherine Mansfield. K.J. Orr’s stories have been shortlisted for the BBC National Short Story Award and the Bridport Prize.

MICHAEL MORPURGO 5.00-5.45pm - Free (booking essential) with a raspberry flapjack from The Natural Kitchen We are delighted to welcome former Children’s Laureate and award-winning writer, Michael Morpurgo OBE. The author of War Horse will be talking to children aged 6–11 about his life, the First World War, his love of animals and other inspirations behind his work. He says his stories come, “from all around me. Places, people, stories I hear, little happenings, big happenings, history. I keep my eyes and ears open, my heart fresh.”

madness in our times Barbara Taylor & Adam Phillips 7.00-7.45pm - £5 including a glass of wine Historian Barbara Taylor joins psychotherapist Adam Phillips to discuss mental health in Britain today, and how its treatment has changed over the years. In The Last Asylum, Taylor explores the history of the Middlesex County Pauper Lunatic Asylum in North London. This was one of England’s most infamous asylums, housing nearly 3,000 patients at its peak, including Taylor herself. She gives a powerful account of her battle with mental illness, while telling the compelling story of the demise of our asylums. Taylor is joined by Adam Phillips, who was praised by the New Yorker as ‘Britain’s foremost psychoanalytic writer’. His most recent book, One Way and Another, is a collection of his playful, imaginative and incisive essays.

THE INVISIBLE WOMAN Claire Tomalin 8.30-9.30pm - £5 including a glass of wine The love affair between Charles Dickens and young actress Nelly Ternan lasted for thirteen years, destroying Dickens’ marriage and effacing Ternan from the public record. In this astonishing work, one of our foremost biographers shines a light on the shadows of history, returning the neglected actress to her rightful place, and painting a compelling portrait of the great Victorian novelist himself. Discover the thrilling literary detective story and deeply compassionate book which inspired the film. Claire Tomalin has won numerous prizes for her biographies. Her subjects include Samuel Pepys, Thomas Hardy, Jane Austen, Katherine Mansfield, Charles Dickens … and, of course, Nelly Ternan, the invisible woman.

EMILY’S WALKING BOOK CLUB Setting off from the Marylebone shop at 10.00am and returning for 11.15am. Free (just turn up having read the book) with biscuits provided by La Fromagerie

Join other book-lovers for a stroll around Regent’s Park with writer, bookseller and blogger Emily Rhodes to discuss Michael Cunningham’s award-winning novel The Hours. Clarissa Vaughan is going to buy the flowers herself ... as she prepares for a party she is giving for a dying friend in 1990s New York. In 1940s Los Angeles, a young wife and mother yearns to escape her claustrophobic world and read her treasured copy of Mrs Dalloway, and in 1920s Richmond, Virginia Woolf is struggling to begin work on that very book. Moving effortlessly between decades and locations, this deeply affecting novel intertwines the worlds of three women, recasting Woolf’s enduring classic Mrs Dalloway in a compelling new light. ‘A sensitive marriage of intelligence, integrity and finely textured emotions.’ The Sunday Times ‘Extremely moving, original and memorable.’ Hermione Lee, TLS

We are delighted to welcome renowned literary critic Nicholas Lezard, prize-winning author Paul Bailey and distinguished translator Len Rix to celebrate the work of Antal Szerb. Szerb was a prolific, eminent Hungarian writer, whose books include the masterpiece Journey by Moonlight. This coming-together of some of our best literary minds to pay respect to a truly great figure is a unique opportunity for fans of Szerb, and an inspiring introduction for those who are new to his work. Nicholas Lezard is a literary critic for the Guardian, and writes the Down and Out in London column for the New Statesman. His most recent book is Bitter Experience Has Taught Me. Paul Bailey is a writer and critic, whose work has been shortlisted for the Man Booker Prize. His new novel is The Prince’s Boy. Len Rix is a translator of Hungarian literature, whose renderings of Antal Szerb’s work have been especially highly praised.

THE BLOOMSBURY COOKBOOK 1.30-2.15pm - £5 including a treat from the book Lunch break event

Jans Ondaatje Rolls talks to Olivia Laing ‘One cannot think well, love well, sleep well, if one has not dined well.’ Virginia Woolf’s famous line from A Room of One’s Own prompts the question, what exactly did the Bloomsbury Group eat? Answers are revealed in Jans Ondaatje Rolls’ delightful Bloomsbury Cookbook – a series of narratives accompanied by recipes, sketches, letters and hand-written notes. This is a must for all literary food lovers, a chance to discover what sustained E.M. Forster, Roger Fry, Virginia Woolf and their companions, and to enjoy a taste of it yourself. Jans Ondaatje Rolls will talk to Olivia Laing, the British Library’s Writer in Residence and author of To the River and The Trip to Echo Spring.

What shall we do, Blue Kangaroo? Come along to meet celebrated childrenâ&#x20AC;&#x2122;s writer and illustrator Emma Chichester Clark, whose work includes the beloved Blue Kangaroo series, Melrose and Croc, and many other wonderful books. Join in the fun and listen to stories in this engaging talk for under-fives.

the temporary gentleman Sebastian Barry talks to Alex Clark 7.00-7.45pm - £5 including a glass of wine The prize-winning author of The Secret Scripture makes his only London appearance to talk about his stunning new novel The Temporary Gentleman. Jack McNulty is a ‘temporary gentleman’ – an Irishman whose commission in the British Army in the Second World War was never permanent. In 1957 he sets out to tell his tale, and so Barry gives us a moving portrait of one man’s life – his demons and his lost love – in his characteristic lyrical prose. Amidst a great deal of praise, his work has been described as ‘magnificent and heart-rending’ by the Guardian, and ‘daring, accommodating and humane’, by John Banville. He talks to Alex Clark, literary critic for the Guardian, the Evening Standard and the BBC, and former editor of Granta.

CAPTURING A SENSE OF PLACE Colin Thubron, Mahesh Rao and Tracy Chevalier talk to Barnaby Rogerson 8.30-9.30pm - £5 including a glass of wine

How can the feeling of a place best be caught on the page? How do the sharp observations of travel writing compare to fictions inspired by the landscape? Some of our finest travel writers and novelists come together to discuss the myriad ways of capturing a sense of place. It’s a subject close to our hearts, as you can tell from the way we arrange our books!

Colin Thubron is one of our foremost travel writers, novelists and adventurers, whose books include To a Mountain in Tibet and Shadow of the Silk Road. Mahesh Rao is a debut novelist who lives in Mysore, India. In The Smoke is Rising he examines the contradictions of this city in a funny and poignant narrative. It is the first work of original fiction to be published by Daunt Books. Tracy Chevalier’s Girl with a Pearl Earring, a magnificent conjuring of seventeenth-century Delft, firmly established her as one of our finest novelists. Her most recent book, The Last Runaway, follows a young Quaker girl to nineteenth-century Ohio. Barnaby Rogerson is a travel writer and historian. He runs Eland Publishing, which specialises in keeping the classics of travel literature in print.

Food & Drink at the Daunt Books Festival Delicious treats will be provided for various daytime talks, thanks to the generous support of Marylebone institutions: La Fromagerie, The Ginger Pig, The Natural Kitchen & Rococo Chocolates. You are very welcome to bring a sandwich to our lunch-break talks, if it means you can sneak out of the office to enjoy some food for thought. Special pre- and post-Festival menus are available from Hardy’s Brasserie, round the corner from our shop at 53 Dorset Street, W1U 7NH. Please book in advance on 0871 971 6876, using the reference ‘Daunt’. As you can see, the menus are themed to the evening’s talks.

‘Madness in Our Times’

‘Capturing a Sense of Place’

TICKETS Daunt Books Festival Pass - £30 - entry to all 12 talks over the two days Individual talks - £5 Children’s talks – FREE, but you must reserve a space Emily’s Walking Book Club – FREE, just turn up having read the book. Tickets may be bought from our Marylebone shop in person, with credit/debit card by telephone on 0207 224 2295, or on our website, www.dauntbooks.co.uk. The Programme for our 2014 literary festival

The Programme for our 2014 literary festival