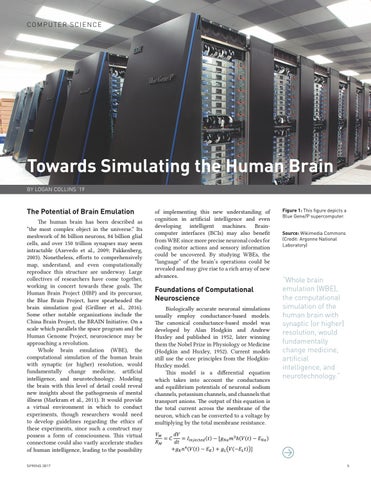 Towards Simulating the Human Brain BY LOGAN COLLINS ’19

The Potential of Brain Emulation The human brain has been described as “the most complex object in the universe.” Its meshwork of 86 billion neurons, 84 billion glial cells, and over 150 trillion synapses may seem intractable (Azevedo et al., 2009; Pakkenberg, 2003). Nonetheless, efforts to comprehensively map, understand, and even computationally reproduce this structure are underway. Large collectives of researchers have come together, working in concert towards these goals. The Human Brain Project (HBP) and its precursor, the Blue Brain Project, have spearheaded the brain simulation goal (Grillner et al., 2016). Some other notable organizations include the China Brain Project, the BRAIN Initiative. On a scale which parallels the space program and the Human Genome Project, neuroscience may be approaching a revolution. Whole brain emulation (WBE), the computational simulation of the human brain with synaptic (or higher) resolution, would fundamentally change medicine, artificial intelligence, and neurotechnology. Modeling the brain with this level of detail could reveal new insights about the pathogenesis of mental illness (Markram et al., 2011). It would provide a virtual environment in which to conduct experiments, though researchers would need to develop guidelines regarding the ethics of these experiments, since such a construct may possess a form of consciousness. This virtual connectome could also vastly accelerate studies of human intelligence, leading to the possibility SPRING 2017

of implementing this new understanding of cognition in artificial intelligence and even developing intelligent machines. Braincomputer interfaces (BCIs) may also benefit from WBE since more precise neuronal codes for coding motor actions and sensory information could be uncovered. By studying WBEs, the “language” of the brain’s operations could be revealed and may give rise to a rich array of new advances.

Foundations of Computational Neuroscience Biologically accurate neuronal simulations usually employ conductance-based models. The canonical conductance-based model was developed by Alan Hodgkin and Andrew Huxley and published in 1952, later winning them the Nobel Prize in Physiology or Medicine (Hodgkin and Huxley, 1952). Current models still use the core principles from the HodgkinHuxley model. This model is a differential equation which takes into account the conductances and equilibrium potentials of neuronal sodium channels, potassium channels, and channels that transport anions. The output of this equation is the total current across the membrane of the neuron, which can be converted to a voltage by multiplying by the total membrane resistance.