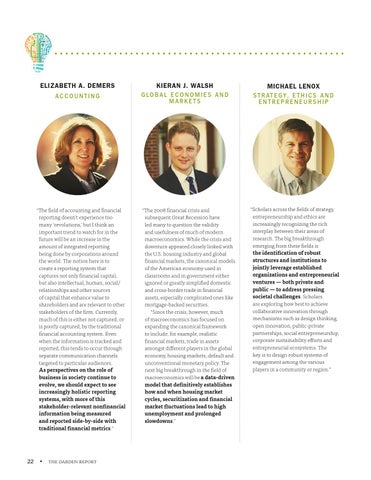 “The field of accounting and financial reporting doesn’t experience too many ‘revolutions,’ but I think an important trend to watch for in the future will be an increase in the amount of integrated reporting being done by corporations around the world. The notion here is to create a reporting system that captures not only financial capital, but also intellectual, human, social/ relationships and other sources of capital that enhance value to shareholders and are relevant to other stakeholders of the firm. Currently, much of this is either not captured, or is poorly captured, by the traditional financial accounting system. Even when the information is tracked and reported, this tends to occur through separate communication channels targeted to particular audiences. As perspectives on the role of business in society continue to evolve, we should expect to see increasingly holistic reporting systems, with more of this stakeholder-relevant nonfinancial information being measured and reported side-by-side with traditional financial metrics.”

“The 2008 financial crisis and subsequent Great Recession have led many to question the validity and usefulness of much of modern macroeconomics. While the crisis and downturn appeared closely linked with the U.S. housing industry and global financial markets, the canonical models of the American economy used in classrooms and in government either ignored or greatly simplified domestic and cross-border trade in financial assets, especially complicated ones like mortgage-backed securities. “Since the crisis, however, much of macroeconomics has focused on expanding the canonical framework to include, for example, realistic financial markets, trade in assets amongst different players in the global economy, housing markets, default and unconventional monetary policy. The next big breakthrough in the field of macroeconomics will be a data-driven model that definitively establishes how and when housing market cycles, securitization and financial market fluctuations lead to high unemployment and prolonged slowdowns.”

“Scholars across the fields of strategy, entrepreneurship and ethics are increasingly recognizing the rich interplay between their areas of research. The big breakthrough emerging from these fields is the identification of robust structures and institutions to jointly leverage established organizations and entrepreneurial ventures — both private and public — to address pressing societal challenges. Scholars are exploring how best to achieve collaborative innovation through mechanisms such as design thinking, open innovation, public-private partnerships, social entrepreneurship, corporate sustainability efforts and entrepreneurial ecosystems. The key is to design robust systems of engagement among the various players in a community or region.” 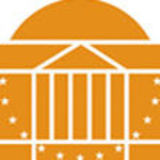